Things have gone from bad to worse for Beyond Meat (NASDAQ:BYND).

Although its IPO was one of the hottest of the year, with the stock price climbing more than 250% in less than three months, things have taken a downward turn. Since late July, Beyond Meat's shares have been in free fall, and the stock plunged again shortly after the company released its third-quarter results on Oct. 28.

To its credit, the company had a strong showing for the quarter, which should have been enough to at least stop the stock's rapid decline. With earnings per share of $0.06 coming in well above the $0.03 that was expected by analysts, and revenues of $92 million also coming in well above the $82.2 million that analysts were looking for, Beyond Meat solidly beat the consensus expectations. In addition, management also increased its guidance for the year: It now forecasts annual revenues will reach as high as $275 million, a significant improvement from its earlier projection of $240 million. 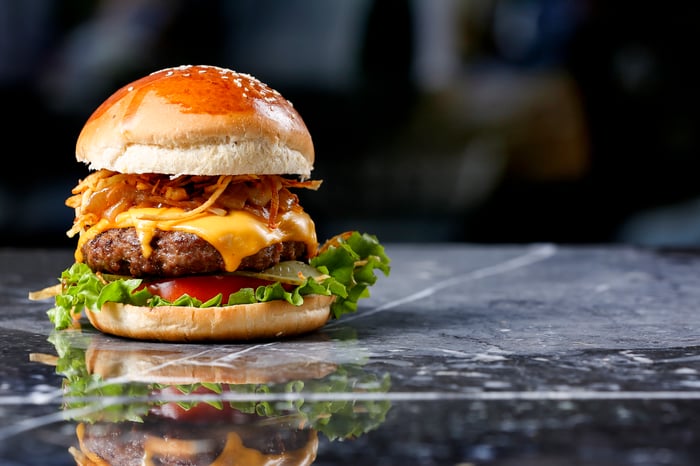 Why did the shares continue to fall?

The sharp drop in Beyond Meat's shares following earnings wasn't driven by the Q3 results, but rather by the fact that the lockup period for insiders expired the following day, on Oct. 29. Insiders were finally allowed to sell their shares, six months after the May IPO. And the flood of sell orders -- nearly 33 million shares traded on that day, a record for the stock -- sent the stock down more than 22%. To put that into perspective, the day's volume was nearly double the 18.6 million shares that traded in the entire week prior to the earnings release. That pushed the stock under $82, a low point it hadn't seen since back in May.

As bad as the decline was, it would have been even worse had the quarterly results not been as strong as they were. It's likely many investors bought up the shares due to the company's performance. The good news for investors, however, is that now that insiders have been able to offload their shares, a big cloud hanging over the stock has dissipated.

But that doesn't mean that Beyond Meat is out of the woods just yet.

Could shares fall even further?

One danger of investing in an expensive growth stock like Beyond Meat is that it's more prone to a big correction than a stock that's more fairly valued. And at more than 13 times its book value, Beyond Meat remains an expensive stock today. While insider sales may have caused one specific plunge, the stock was already falling well before that. Since Aug. 1, shares of Beyond Meat have lost more than half of their value as the hype around the plant-based meat producer diminished. Investors have begun to grow weary in light of all the competition that the company is facing today in the animal-free protein niche, including from privately held Impossible Foods, maker of the Impossible Burger.

Given its high valuation and lack of a strong moat, there are ample reasons for investors to be bearish on the stock today, and that could be bad news for Beyond Meat's share price.

Now that the early fanfare and the excitement surrounding Beyond Meat appears to have died down, its stock is likely to fall to more realistic levels. At over $200 a share, Beyond Meat's shares were grossly overpriced in July, and a correction was inevitable. And while shares have dipped significantly since then, the stock may not be a great buy yet. How successful the company will be in the long term is still a big question mark, especially if a recession hits and consumers are less able or willing to pay a premium for its higher-priced non-meat products.

Investors may want to wait a few more quarters to see how sustainable the business is and how consistent the profits are before buying shares of Beyond Meat as there are still some challenges facing the company.