It was a poor quarter for shipping stocks, with U.S. manufacturing activity falling to a 10-year low in September because of the ongoing uncertainty created by tariff wars and a global economic slowdown. The impact was felt throughout the sector, with even best-of-breed logistics firm C.H. Robinson Worldwide punished after missing expectations and warning of further troubles ahead.

XPO Logistics (NYSE:XPO), a one-time high flier that faced its own troubles earlier in the year, stood out as an exception to the rule this quarter, beating analyst EBITDA estimates and, as importantly, maintaining full-year earnings and free cash flow guidance. XPO for now appears to have found a winning formula of productivity improvements and technology enhancements to help firm up margins, extract more business from current customers, and power through weak macroeconomic conditions. For investors scared away by a late 2018 short attack and internal strife that had the company's largest customer taking its business elsewhere, it looks like a good time to take a fresh look at XPO.

Tech and cost control save the day

XPO in the quarter reported adjusted EBITDA of $1.18 per share, beating Wall Street's $1.04 consensus estimate, despite revenue that at $4.15 billion missed estimates by about $100 million. Quarterly earnings per share grew by 54% year over year, and XPO reaffirmed full-year guidance for both earnings and free cash flow.

CEO Bradley Jacobs on a post-earnings call with investors called the operating environment "tough," saying that "we have been in an industrial recession for the last year." But the company is also making progress working through a series of initiatives that it says together can improve profit by up to $1 billion by 2022. That includes efforts to streamline European operations and use technology to increase workforce productivity, while building out new tech-enhanced business offerings.

XPO has spent the year trying to backfill about $600 million in lost revenue after a large, unidentified customer -- believed to be Amazon.com -- pulled its business in part because of XPO's work to help smaller e-commerce vendors match Amazon's scale in logistics. 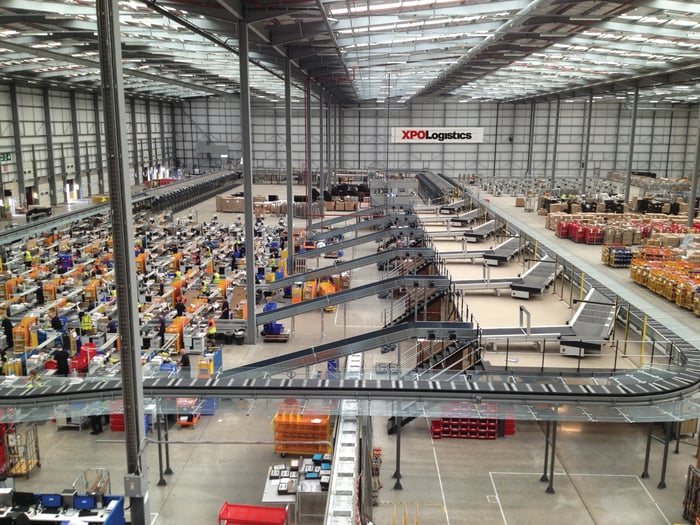 A key to XPO's e-commerce growth is its XPO Direct shared distribution network, which encompasses more than 90 North American facilities to allow for one- to two-day deliveries in most major markets. Contract logistics is a massive and growing $120 billion market, by XPO's measure, and the company has only about a 5% share today.

XPO Connect, meanwhile, is a digital freight marketplace that helps customers get better pricing and improved route planning, while helping truckers fill downtime and reduce empty miles driven. The hope is that the tech is sticky enough to make XPO the preferred choice for shippers and trucking companies, allowing XPO to take more industry share.

The productivity improvements can't continue forever. XPO's quarter helps build the company's case as an operator, but the stock's nearly 3,000% return over a 10-year period ending in mid-2018 was fueled by a flurry of acquisitions. XPO took a hiatus from deal-making earlier in the year but has given signs that a return to acquisitions could be near.

Jacobs told a Morgan Stanley conference in September that he's now spending up to 15% of his time exploring possible deals, and on Oct. 16 the company named Aris Kekedjian, a one-time top deal maker at General Electric, to its board.

Although acquisitions can be fraught with danger, Jacobs has a proven track record of more than 500 deals spread across XPO and two previous roll-ups. And the company is going to need more than organic growth to power the sort of outsize growth investors have come to expect from XPO.

Jacobs on the call said that "we are in [the] very early stages of conversations with potential sellers," but he also said there's no time frame to get a deal done. While XPO, like most companies, is keeping its cards close, the recent drop in sector valuations from the slowdown makes the math easier when seeking out targets that can be financially accretive.

The odds are high that XPO returns to deal-making soon. The only question is how soon.

The mojo is back

XPO can't outrun the business cycle forever, and absent an end to the ongoing trade wars and a rebound in global emerging markets, organic revenue growth is likely to continue to be under pressure for some time. 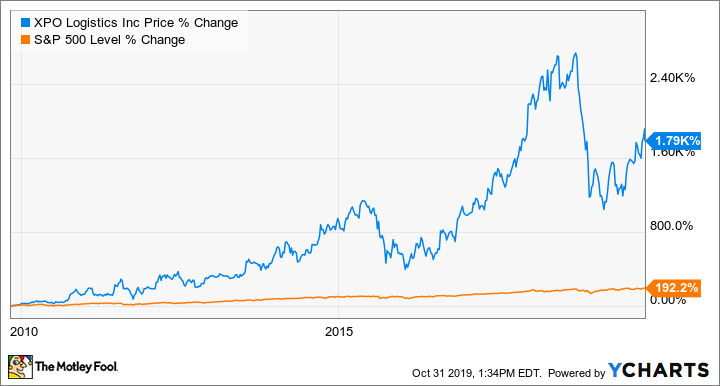 But the investment case for XPO over the past decade was based more on the company's ability to consolidate a fragmented industry and drive productivity improvements than it was based on the ebb and flow of the highly cyclical shipping business. That thesis was called into question last year, when the growth stalled and XPO turned its focus to buybacks and paying down debt instead of doing more deals.

It's taken a few quarters to right the ship, but XPO appears to be regaining its momentum. The time is right for long-term investors to buy in.