Please ensure Javascript is enabled for purposes of website accessibility
Log In Help Join The Motley Fool
Free Article Join Over 1 Million Premium Members And Get More In-Depth Stock Guidance and Research
By James Brumley - Nov 6, 2019 at 8:48AM

The headline was head turning, but Google's path to wearables growth is narrow, short, and rife with stumbling blocks.

The pairing is a smart match for both tech companies. Mainstream manufacturers have been mostly unwilling to design hardware for Google's wearables operating system, called Wear OS. Meanwhile, Fitbit makes great hardware, but it's struggled to win market share within the smartwatch arena. Google brings much-needed marketing firepower to the table, while Fitbit brings a respected brand name that could bring Wear OS to the center stage.

Still, the news leaves many investors and wearables fans wondering ... what's next? 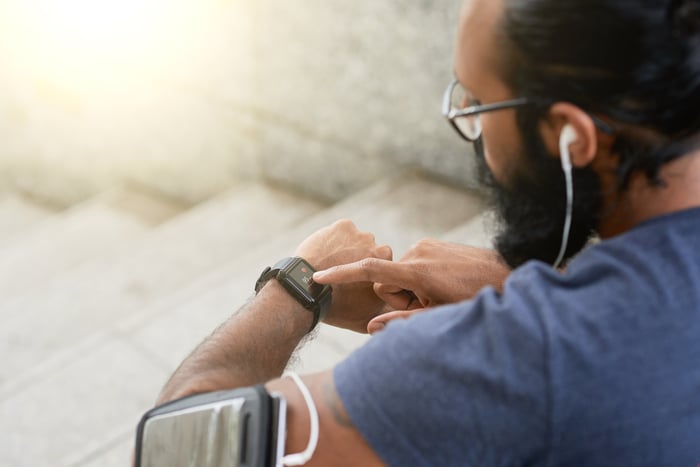 Google is conspicuously missing from the wearables landscape

It may be the globally dominant name in web search, but Google's Wear OS is something of a no-show when it comes to smartwatches and wearable devices.

IDC reports China's Xiaomi (XIACF 1.90%) was the world market share leader in wrist-worn wearables in the second quarter of this year, securing 17.3% of total shipments. Those devices weren't powered by Wear OS, however, and suspiciously, neither is the new line of Xiaomi's Mi smartwatches. They'll run a custom-built version of Android, which is still a win for Google, though not the win it wanted.

Apple came in second at 14.8%, while Huawei ranked third at 14.1% in IDC's Q2 look. Huawei's recently launched lineup relies on a home-grown OS as well. Fitbit ranked fourth at 10.1%, and Samsung scored the fifth-highest market share at 9.4% in IDC's Q2 survey. Neither of those makers wanted Wear OS either.

Narrowing the look to just smartwatches and not counting fitness trackers, the top three names control 88% of the market without the use of Google's wearable operating system.

This is un-Alphabet-like weakness, underscoring something Google's senior VP Rick Osterloh explained in a blog post from Nov. 1 confirming the agreement. He wrote, "Google has made progress with partners in this space with Wear OS and Google Fit, but we see an opportunity to invest even more in Wear OS as well as introduce Made by Google wearable devices into the market."

Comments from Fitbit CEO James Park gently pointed to its tallest hurdle as well. He explains, "Google is an ideal partner to advance our mission. With Google's resources and global platform, Fitbit will be able to accelerate innovation in the wearables category, scale faster, and make health even more accessible to everyone."

It could certainly use the help. The company warned investors in July that its third-quarter sales would fall between 10% and 15% thanks to tepid demand for its smartwatch entries.

Healthcare is the entry point

Unlike the smartphone and computer landscapes, the smartwatch arena hasn't whittled itself down to just one or two primary operating systems. It remains quite fragmented, and despite an option to use an OS built by the name behind the world's most popular mobile OS -- that's Android -- manufacturers have been curiously content to steer clear of Google's open-source option. It could take months just for Samsung, Xiaomi, and Huawei to plan a pivot from their preferred smartwatch platforms and years to implement such a switch, even if they wanted to.

Where Google could make meaningful headway in a fairly short period of time, however, is where Fitbit is doing surprisingly well and where Alphabet is quietly working hard. That's on the healthcare technology front. During the second quarter of the year, Fitbit's sales of fitness tracker devices grew 56% year over year, spurring a 16% improvement for the company's Fitbit Health Solutions unit. Google, meanwhile, has been wading deeper into digital healthcare solutions, including the development of a way to connect its Google Fit app with Fitbit's Fitbit Plus app.

Fitbit also brings numbers. Craig-Hallum analysts commented on the news, "We believe Google is a natural fit. The deep health and fitness data, coupled with the 28 million active users on the Fitbit platform, offer a tremendous value."

If Wear OS can prove itself to that crowd, it might be easier to bring the operating system into the mainstream the same way Android has become the world's most popular mobile OS.

For all the attention they've been given, the smartwatch and fitness tracker markets aren't massive. Strategy Analytics estimates that 12 million smartwatches were shipped during the second quarter of this year, and IDC notes that smartwatches are a bigger piece of the wrist-worn wearables market than fitness trackers and conventional watches are. For perspective, IDC says 333 million smartphones were delivered in the same quarter. Even the struggling PC market fared better, with nearly 63 million units shipped during Q2.

The next phase of Fitbit's life is sure to be interesting with Google in the driver's seat. And the media is likely to cover every nuanced development in great detail too. But the deal -- which is good news for Fitbit investors -- just isn't going to add any meaningful value to the mix for Alphabet investors anytime soon.