Biotechs trade on the prospects of new advancements to identify and treat diseases. That's something the world needs in good times and bad.

The biotech industry in Europe remains fragmented due to limited early-stage capital and more risk-averse investor sentiment. While a small group of companies have successfully developed new products and financed adequate research and development, many other small ones struggle to get by with constrained capital resources.

Innovation knows no boundaries, and some of the most compelling investments hail from overseas -- including Europe. But here in the U.S., investors are treading carefully, fearing the start of another recession taking hold of the economy. To diversify from the U.S., investors should look at foreign companies in industries such as biotech, where the patient demand for cutting-edge treatments exists regardless of the broader economic outlook.

Let's review some European biotechs worth considering for your portfolio. No need to get out your passport: These companies are also listed on the U.S. exchanges.

Let's begin our European tour in the Netherlands and Belgium, with a visit to see the llamas at argenx (ARGX 7.36%). That's right, llamas. This company built a technology platform and drug pipeline that exploits the fact that human and llama antibodies are virtually identical. Scientists can tweak llama antibodies for human disease targets, resulting in what argenx claims is "a phenomenal immune reaction." 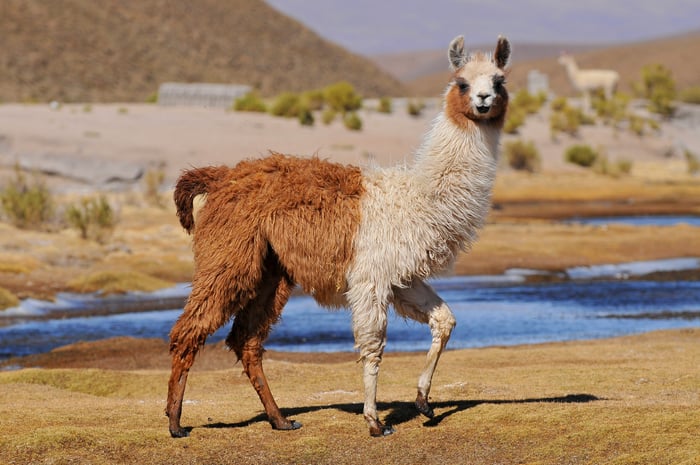 Initially focusing on autoimmune diseases, argenx embarked on a broad development plan for its lead drug candidate, efgartigimod. The first of two phase 3 clinical trials with efgartigimod in primary immune thrombocytopenia is set to begin before the end of 2019. Also, before year's end, argenx expects to kick off a proof-of-concept phase 2 trial in chronic inflammatory demyelinating polyneuropathy, a potential $2.4 billion market opportunity.

In immune thrombocytopenia, the immune system attacks and destroys white blood cells leading to potentially fatal bruising and bleeding. This affects approximately 60,000 people in the U.S. and roughly the same number in Europe. While treatments exist, patients typically cycle through different drugs throughout their lifetimes. Current therapies can cost around $80,000 annually.

Chronic inflammatory demyelinating polyneuropathy attacks the nerves resulting in numbness and pain. It also slows down reflexes and causes weakness in the limbs. About 40,000 people in the U.S. deal with this condition.

Investors should look for two data readouts in 2020. In the first half of the year, argenx plans to report interim phase 2 data in pemphigus vulgaris, a rare disease that causes painful blisters on the skin. More importantly, the phase 3 pivotal trial in myasthenia gravis should have results in the second half of 2020. Myasthenia gravis affects up to 60,000 in the U.S. by weakening skeletal muscle responsible for movement and, importantly, breathing.

The company's pipeline consists of a blend of three wholly owned, one co-developed, and four partnered drug candidates, diversifying risk away from any single compound. This strategy has enabled a broader pipeline and provided much needed non-dilutive capital. For example, Johnson & Johnson (JNJ -0.57%) paid $300 million in cash upfront to co-develop a drug for blood cancers.

Currently valued at roughly $4.6 billion, argenx holds $1 billion in cash on its balance sheet, providing the necessary funds to carry out its extensive R&D activities -- including enough cash to get to the phase 3 trial results in myasthenia gravis in the second half of 2020. The stock trades at $120 a share, up 20% for the year but down from its peak of $150.

Stocks like argenx trade up or down on the successes or failures of their R&D activities. Positive clinical trial results should bolster the stock price and company valuation irrespective of whether there is a recession. The only issue would be if argenx needed to raise more capital, which at this time, does not look necessary.

While we're in Belgium, let's head over to see high-flying Galapagos (GLPG 3.44%). The stock has doubled this year and currently trades above $180. Its most dramatic move came when Gilead Sciences (GILD -0.18%) expanded its existing strategic relationship into a "transformative research and development collaboration" carrying a hefty price tag.

In July, Gilead paid $3.95 billion and made an additional $1.1 billion equity investment in Galapagos. The two companies had previously partnered on the development of Galapagos' filgotinib, and the new pact provides Gilead with the option to acquire additional pipeline products. 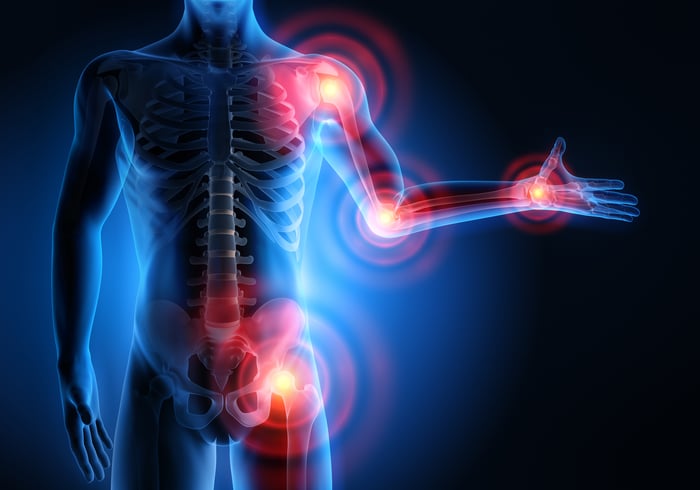 Filgotinib successfully achieved the primary and secondary endpoints in a pivotal phase 3 clinical trial in rheumatoid arthritis earlier this year. In October, the companies presented additional long-term follow-up data. Regulatory filings for approval have been submitted in Europe and Japan, and the submission to the U.S. Food and Drug Administration is set to be completed by the end of 2019. This new deal gives Galapagos more involvement in filgotinib's commercial operations in Europe.

You may be wondering why Gilead doesn't just buy Galapagos. Good question. Perhaps it's too expensive, or the integration of different cultures and skill sets would fail, destroying the overall value. Whatever the case, Gilead agreed to a 10-year standstill whereby it will not buy or own more than 29.9% of Galapagos.

Galapagos' $11.5 billion valuation looks expensive at first glance. However, cash and cash equivalents make up 5.6 billion euros, the equivalent of $6.2 billion. Thus, over half the value is cash.

Furthermore, filgotinib could be approved next year in Europe, Japan, and the U.S. as a treatment for rheumatoid arthritis, bringing the company its first revenue from product sales. Since disease does not care about recessions, patients need useful treatments like filgotinib irrespective of the current state of the economy.

Next, let's head southwest to the isle of Jersey in the United Kingdom to the headquarters of oncology company NovoCure (NVCR 7.41%). Turning to physics to fight cancer, NovoCure markets devices that send electrical impulses tuned to special frequencies to disrupt cancer cells from dividing and growing.

NovoCure received FDA approval for its Optune therapy as a treatment for glioblastoma (GBM), also known as stage 4 brain cancer. The prognosis is poor for GBM patients, with an average survival time of about 15 months. NovoCure's Optune system demonstrated in a clinical study in newly diagnosed patients that the more time spent wearing the device each day, the more the median overall survival rate increased, from 16 months up to 37.

The FDA has also approved a similar NovoCure device, NovoTTF-100L, for the treatment of mesothelioma in combination with chemotherapy. Aimed at cancers located in the torso, NovoTTF-100L increased the median overall survival in patients to 21.2 months, compared with 12.1 months for those receiving chemotherapy only. Multiple clinical trials for other cancers are under way using this device. More than 2,700 patients in the U.S., Europe, Japan, and China have received or continue to use NovoCure's therapies. Their use has translated into $294 million in sales over the trailing 12 months (TTM) ending June 30. On Oct. 31, NovoCure will provide third-quarter results, and there's a chance we'll see the company's first profitable quarter.

On the other hand, NovoCure's $7.3 billion market capitalization appears expensive. Using TTM revenue from last quarter, its price-sales ratio approaches 25. For context, an analysis of price-to-sales ratios from New York University's Stern School of Business reveals that as of January 2019, biotech and pharmaceutical companies traded in a range of 4 to 6. That said, and even accounting for last December's end-of-year market sell-off, NovoCure is a story of continuous growth in product use and sales. There's nothing wrong with paying a premium for steady growth.

Galapagos and argenx hold sufficient cash to achieve key milestones, including launching new drugs in the near future. NovoCure continues to generate sales while expanding the number of cancer patients who may benefit from its devices. Arguably, these mid-cap biotech companies have reduced both capital and development risks, providing attractive growth opportunities for investors, regardless of whether we're due for a recession.