Please ensure Javascript is enabled for purposes of website accessibility
Free Article Join Over 1 Million Premium Members And Get More In-Depth Stock Guidance and Research
By Beth McKenna - Nov 7, 2019 at 8:15AM

Pinterest ( PINS -4.63% ) reported third-quarter 2019 results after the market closed last Thursday, Oct. 31, that were a mixed bag and disappointed many investors.

The image-sharing platform operator grew revenue 47% year over year to $279.7 million and turned in adjusted earnings per share of $0.01, up from a loss of $0.12 per share in the year-ago period.

Shares plunged 17% the following day, which we can attribute to revenue falling short of Wall Street's consensus estimate and to management issuing a lighter full-year revenue outlook than many investors were probably expecting. On the positive side, however, the bottom-line result not only beat analysts' projections but it also represents the San Francisco-based tech company's first profitable quarter, on an adjusted basis, as a public entity.

Since its earnings release, Pinterest stock is down 20.3% through Nov. 8, though it still has a small 5.5% gain since its April initial public offering (IPO).

Earnings releases tell only part of the story. Here are four key things management shared on the Q3 call that you should know. 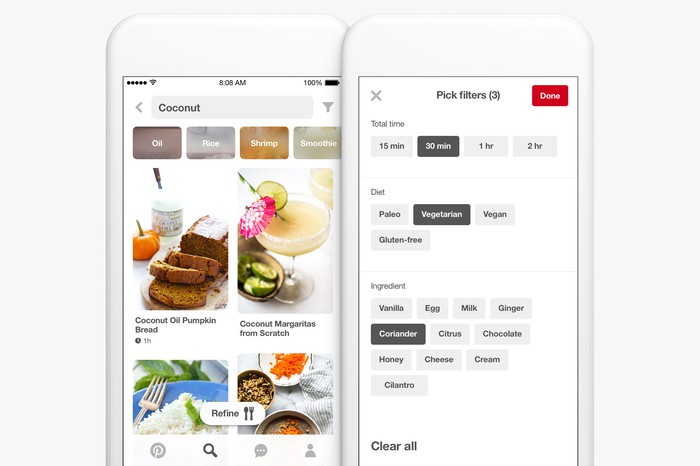 The company is making the site more "shoppable"

[W]e continue to make Pinterest more shoppable. The number of merchant catalogs uploaded has grown 75% quarter over quarter. We launched a new business profile that includes a shopping tab for retailers, and we're working with e-commerce platforms, including Shopify, to bring merchants and advertisers onto the platform.

While Pinterest doesn't consider itself a social media company, as many others do, it shares a key commonality with social media companies such as Facebook and Twitter: Its business model is advertising-based. The goal of advertising is to sell more stuff, of course, so it's naturally a big positive that the company is intensely focused on making its site more shoppable.

Silbermann wouldn't disclose the nature of the company's relationship with Shopify, but would only say that "we're working with Shopify on building unique commerce experiences and we'll have more details to share in the year ahead."

Q3 revenue from video formats grew significantly year over year, about three times. What we find is that advertisers want to tell their stories with video and so we're building a lot of the back-end features to improve upload speed [and] client performance analytics. We also launched a new cost-per-view objective in Q3 and that's really for advertisers wanting to push their brand awareness goals.

This comment speaks for itself. Year-over-year video ad revenue growth approximately tripling -- or increasing about 200% -- is powerful.

The company is focused on expanding use cases

[W]e know that there is a core set of use cases that Pinterest is really good at. Think of your core lifestyle use cases like what do I wear? What does my home look like? What do I want to eat? A special event? But we also know that a lot of users who come into Pinterest use it for one use case, but they don't go to a second or third or fourth or fifth use case, and partly that's because the machine learning and personalization that we've built in the past would actually recommend more of what you've seen. So if you're using it for cooking, we're going to send you more and more cooking recommendations.

He went on to say that Pinterest is addressing this issue in a couple ways. For one, it's "introducing more diversity into its home feed." It's doing this by "building machine-learning [a leading type of artificial intelligence, or AI] models that focus not only on the quality of recommendations based on what [users have] seen in the past, but [also] things that are adjacent, that [users] might like to see in the future.

Geographic expansion has been brisk, but a pause is planned

[W]e're now advertising in 9 new markets including Greece, Poland, Hungary and Romania. In total, we now serve ads in 28 countries, up from 19 at the end of Q2.

In addition to the new markets Silbermann mentioned, Pinterest also expanded into these countries in the third quarter: Cyprus, Czech Republic, Luxembourg, Malta, and Slovakia.

CFO Todd Morgenfeld added on the call that the company was advertising in just seven countries at the end of last year. He also emphasized that investors should not expect a continuation of this torrid geographic expansion, as the company believes that it has "a lot of opportunity in those [current] markets outside of the U.S., particularly in English-speaking countries and in Western Europe, ... and we want to make sure we're executing to potential before we get distracted in other places."