Please ensure Javascript is enabled for purposes of website accessibility
Log In Help Join The Motley Fool
Free Article Join Over 1 Million Premium Members And Get More In-Depth Stock Guidance and Research
By Reuben Gregg Brewer - Nov 7, 2019 at 7:35AM

A.O. Smith is well off its highs so far in 2019, with China being a key negative -- but there's more to the company than one country.

China looms large for water heater maker A.O. Smith (AOS 3.12%). It's a big reason for the company's laggard performance of late, with the stock up just 14% over the past three years compared to a roughly 45% gain for the S&P 500 Index. But it's important to step back and look at the company from a greater distance before passing judgement, because right now Wall Street appears to be focusing a little too much on just one country when there's so much more to understand here.

It would be impossible to suggest that China isn't important to A.O. Smith's business. Roughly 34% of the company's top line comes from that one country alone. It has been a huge growth engine, too, with a compound annual sales growth rate of 17% over the past decade. When there are problems in China, investors should expect them to hit A.O. Smith hard.

That said, this is the first time that there's been a notable problem in China, helped along by both the country's slowing growth and the very public trade spat with the United States. 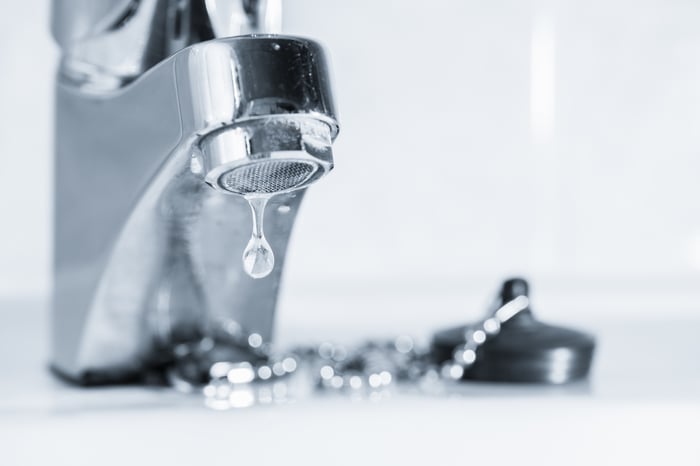 To put some numbers on the problem, sales in China fell 20% in the third quarter of 2019. That drop drove a 3% decline in the company's overall sales number. The impact on the bottom line was even worse, with earnings off by 17% year over year. Margins in the company's China operations, meanwhile, fell from 14.3% to 1.9%. It's ugly in China, and investors are right to be worried about it.

But the company isn't exactly sitting around and hoping that things change for the better. It is taking steps to improve performance, including cutting 20% of its staff, streamlining operations (including store closures and productivity enhancements), and working with customers to better manage inventory levels. A.O. Smith talked about these efforts before it actually dug into its top- and bottom-line results during the third-quarter 2019 conference call. It knows there's a problem, and is well aware that it needs to both address it and clearly explain what it is doing to shareholders.

But China isn't the only thing that's important about A.O. Smith.

The rest of the company

For starters, while China is large, the biggest piece of the business is actually its North American operation. North America makes up 64% of the top line (the rest is Europe and the Far East). The North American market is very different from China because it is mature. In China, customers have been paying more for higher quality water heaters as they have moved up the socioeconomic ladder. In North America, customers are largely replacing old water heaters with new ones.

Prices in the North American segment go up for two reasons: inflation and product improvements. Moreover, the company has a leading market share position on both the wholesale and retail sides of the operation. It's a fairly steady business, with sales up 6% in the most recent quarter. Coupled with the relatively large size of this business, that was enough to offset a material amount of the hit from China. Yes, China is a problem, but it clearly rests on the very solid foundation of A.O. Smith's North American operation. 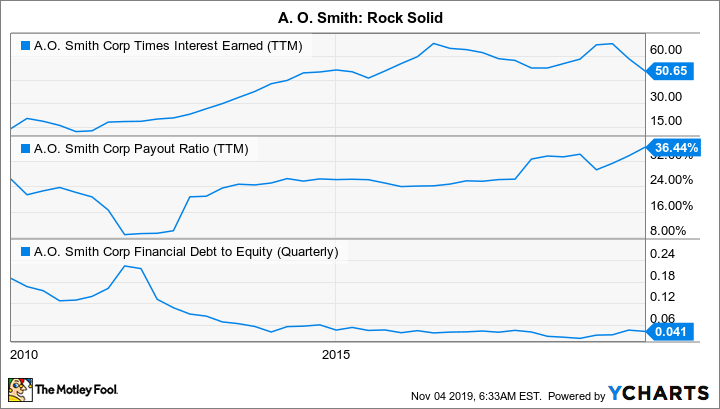 But that's not the only piece of the puzzle. When it comes to a company's financial foundation, investors also need to examine its balance sheet. A.O. Smith's long-term debt makes up just 16% of its capital structure -- a modest level for any company. Its financial debt to equity ratio is even better at an astounding 0.04 times. Moreover, despite the recent top- and bottom-line hits, the company still covers its trailing interest expenses by an incredibly robust 50 times. And for the dividend investors out there, its trailing payout ratio is a solid 36%. This is not a company that's in financial distress -- it has the financial wherewithal to muddle through its China troubles.

And then there's India. This is a market into which A.O. Smith is moving more aggressively, largely using the historically successful playbook it ran to grow in China. Like China a decade ago, a reliable hot water heater is still an affordable luxury in India that everyone wants to buy as soon as they're able. This business is tiny today, but A.O. Smith believes its addressable market will more than double in size by 2030. So there's a growth catalyst hidden behind China in the company's "rest of world" segment. Yes, China is the most important country in that division today, but equally large India could soon start to show that it's got just as much long-term promise.

Don't throw the baby out with the (warm) bathwater

At the end of the day, A.O. Smith's business is much bigger than its China operations. That sounds like an obvious statement, but Wall Street has a habit of getting fixated on something and ignoring all of the other facts. Yes, China is a problem for A.O. Smith, and it has knocked the company off the growth stock pedestal it once inhabited. But it isn't the end of the world. In fact, the company's dividend yield, at around 1.9%, is near its highest level in a decade. And the price to sales, price to earnings, price to cash flow, and price to book value ratios are all below their five year averages right now. In other words, A.O. Smith looks relatively cheap today. If you can stomach some near-term uncertainty, the risk/reward balance here looks fairly compelling.