Please ensure Javascript is enabled for purposes of website accessibility
Free Article Join Over 1 Million Premium Members And Get More In-Depth Stock Guidance and Research
By Evan Niu, CFA - Nov 7, 2019 at 8:00AM

The iPad was one area of strength when Apple reported earnings last month, with iPad revenue jumping 17% to $4.7 billion. CEO Tim Cook attributed the growth to "ongoing momentum of our wider lineup," while CFO Luca Maestri added that the iPad active installed base had hit an all-time high. The Cupertino tech giant no longer discloses unit sales, so investors have to turn to third-party researchers.

This week, Strategy Analytics released its estimates on the tablet market in the third quarter, and Apple continues to lead the way. 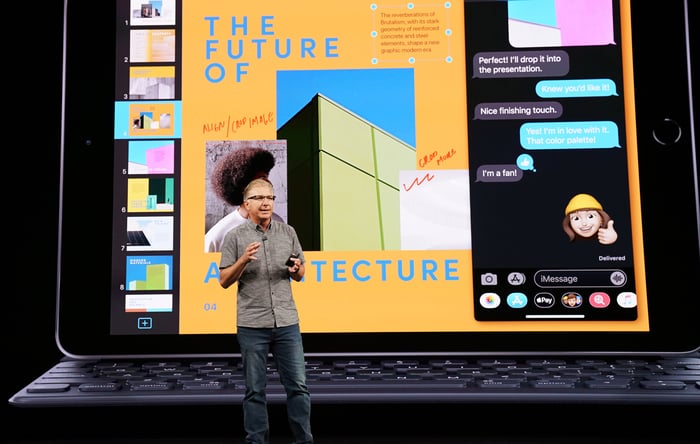 Apple and Amazon lead the way

The market researcher believes that Apple shipped 10.1 million tablets in the third quarter, up 4% compared to a year ago. Amazon.com came in No. 2 with 5.3 million shipments, thanks to brisk sales during the e-commerce company's Prime Day in July that spurred demand with promotions and discounts for a broad swath of Amazon's devices. Amazon updated the Fire HD 10 tablet in October, which was after the third quarter ended.

The global tablet market shrank by 4%, according to Strategy Analytics, and many of the top vendors saw unit volumes sink. Apple still dominates the tablet market, recently adding more features to the iPad to improve productivity, including the revamped iPadOS.

Much like other parts of Apple's business, the company has been leaning heavily on higher prices to drive most of the segment's growth, as demonstrated by a 17% jump in revenue on a 4% increase in volume.

President Trump's ongoing trade war with China and the related ban on Huawei has hurt the Chinese telecommunications behemoth, in part because the tensions have severely limited Huawei's access to Android and online services provided by Alphabet subsidiary Google.

"Huawei shipment volumes fell 18% as the US-China trade war restricts its ability to compete outside of the domestic Chinese market," Strategy Analytics research analyst Chirag Upadhyay noted. "Its key issue is its inability to launch new Android models outside of China as Western consumers rely heavily on Google Mobile Services."

The estimates differ from figures that IDC put out last week, which suggest that Apple shipped 11.8 million tablets and that the overall market returned to growth of 1.9%.