MGM Resorts (NYSE:MGM) is hitting on all cylinders at most of its U.S. properties and is pulling cash from properties as it sells real estate assets to REITs. But one area where the company is underperforming is Macao, the world's biggest gambling market.

MGM owns MGM Macao on the Macao Peninsula and MGM Cotai in the bustling Cotai region, but they are underperforming their rivals in this portion of southeastern China on a number of levels. Here's where the company can improve and how it might go about boosting numbers and drive this casino stock higher. 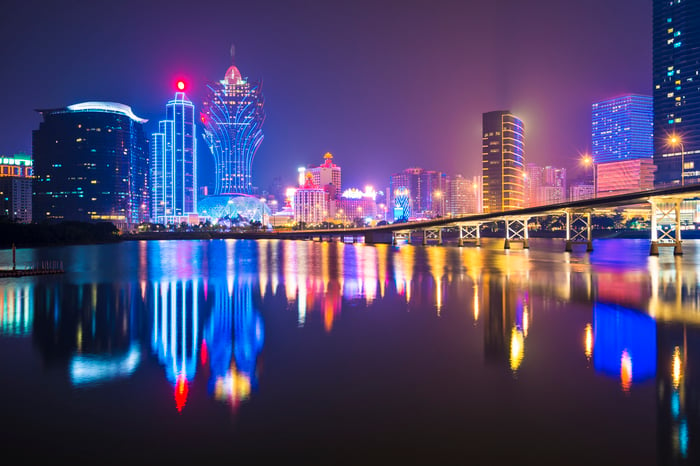 Underperforming where it counts

One of the best metrics to show a resort's efficiency is its EBITDA margin. EBITDA, or earnings before interest, taxes, depreciation, and amortization, is a proxy for the cash flow generated by a resort, and the world's best properties consistently have an EBITDA margin above 30%.

MGM is reporting well below 30% at both of its Macao properties, and what makes that worse is that revenue is well below rivals' properties operated by Las Vegas Sands (NYSE:LVS) and Wynn Resorts (NASDAQ:WYNN) as well.

MGM Macao and MGM Cotai are generating about half as much cash flow as neighboring casinos, which is a wide margin even if there are differences in how properties are managed and in the customers they serve. Clearly, if MGM just catches up to the competition, it could add $500 million or more in EBITDA from Macao alone.

How to grow in Macao

There are two levers MGM Resorts can pull in Macao: add to the VIP baccarat volume or add to the mass-market baccarat volume. Increasing revenue from hotel rooms, restaurants, or other casino games simply won't move the needle like baccarat will.

Given its proximity to Wynn's two properties, which typically serve high-end customers, I think MGM has the best chance to attract mass-market players. Over 80% of the company's casino profit came from the mass market, and volume increased 13% in the segment in the third quarter.

What's interesting is that MGM is going the other direction. It recently opened The Mansion at MGM Cotai as a draw for high-end gamblers. If successful, that could be profitable. But I would rather see it lean into its existing customer base and leave the VIP market to places like the Wynn Palace.

Sometimes, companies can increase margins without growing revenue, which helps the bottom line. But without revenue growth, I don't know if there's a way for MGM to increase EBITDA margins given the fixed costs that go into operating a resort. So the company's improvement all depends on increasing revenue, which will have a disproportionately positive impact on the bottom line.

MGM doesn't have a history of outperforming -- or even matching -- rivals' revenue in Macao. But if it can keep up with Las Vegas Sands and Wynn Resorts, the upside for investors would be tremendous.