Shares of L Brands (NYSE:BBWI) fell 13% in the month of October, according to data from S&P Global Market Intelligence. The owner of Victoria's Secret and Bath & Body Works has struggled mightily in the past few years. The core Victoria's Secret brand has suffered from a decline in mall retail traffic, as well as new, body-positive competitors from both start-ups and private labels of large general retailers.

While L Brands didn't report results in October, the company was still victim to a big downgrade from a leading Wall Street firm as a result of sectorwide pressures. 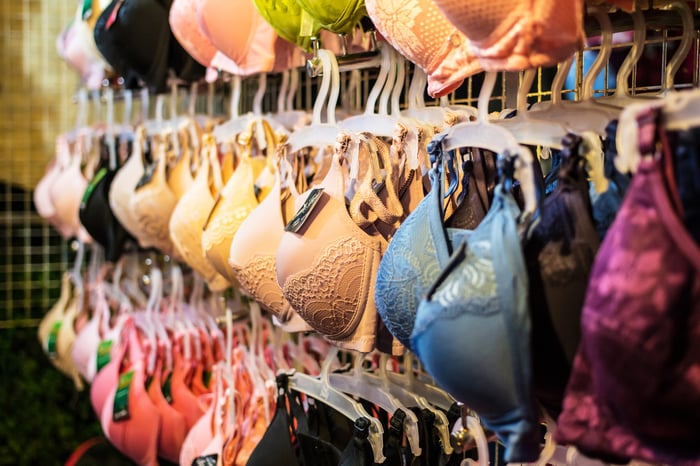 Of all consumer discretionary stocks, branded-apparel companies have perhaps suffered the most from the rise of e-commerce, cheaper private labels, and start-up brands, which have the ability to find audiences on large internet platforms.

The industry got another dose of bad news in mid-October, when analysts from Credit Suisse downgraded almost the entire branded-apparel space. According to the company's channel checks, U.S. retail sales remained "sluggish" in the third quarter, and the analysts concluded the weak trends are likely to continue into the fall and holiday season. Analysts also cited commentary from L Brands rivals Hugo Boss and Levi Strauss, which confirmed the muted consumer traffic trend.

As a result, Credit Suisse downgraded many names in the space, including L Brands, which it moved from a neutral rating to an underperform.

It's hard to get excited about any mall-based or department-store apparel brands, despite their low valuations, unless it's a high-luxury brand. For L Brands' part, things have also not been going well at the company level. Last December, the company cut its dividend, and last quarter, it saw adjusted earnings per share decline by one-third.

Investors will get another glimpse into the troubled retailer when it reports earnings on November 20.