Please ensure Javascript is enabled for purposes of website accessibility
Free Article Join Over 1 Million Premium Members And Get More In-Depth Stock Guidance and Research
By James Brumley - Nov 9, 2019 at 10:15AM

It's still the 800-pound gorilla in the room, but this gorilla is growing some gray hair.

It's difficult to argue that Amazon.com ( AMZN -1.38% ) isn't a smashing success story. It's never been a wildly profitable company boasting wide margins. But, it makes up for thin margins with sheer size. The organization has grown to service roughly half of the United States' total e-commerce market, according to data from eMarketer, and it's successfully waded into the brick and mortar world with divisions like Whole Foods Market and a budding chain of physical bookstores.

There's going to come a point in time, however, when Amazon runs out of places and ways to cost-effectively expand. We may be nearing that point, if we're not there already.

It's a dangerous exercise to speak ill of one of Wall Street's most-loved investments, particularly when that name is a proven performer. Amazon shares are up more than 1800% over the past ten years, and they're still within easy reach of record highs hit just a little over a year ago. Last quarter's year-over-year top-line growth pace of 24% wasn't out of character for the company either. 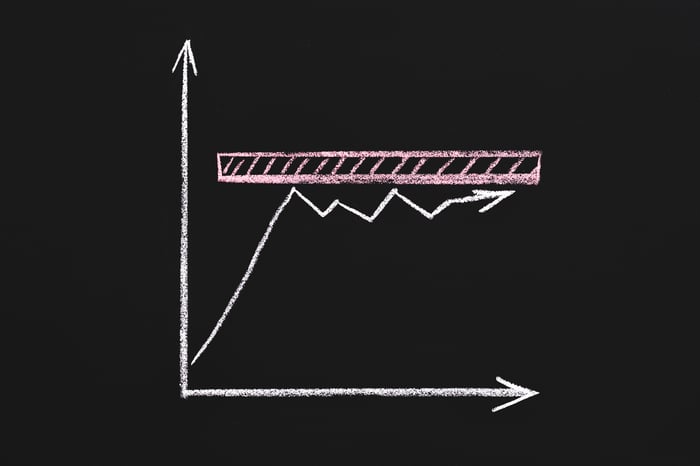 As the old adage goes though, nothing lasts forever. There's still room for the organization to continue growing through vertical and lateral expansions, but we're already starting to see signs that future growth will neither be as easy, or as cheap, as it's been in the past. Three clues stand out among the rest.

Investors who figured that the introduction of one-day shipping for Prime members would more than pay for itself have so far been wrong. Last quarter's top line grew 24%, but fulfillment costs rose nearly as fast at 23%, and global shipping costs rose 46%.

The company didn't say how much of this additional spending was specifically the result of its newly introduced one-day shipping offering, and how much growth in costs would have been incurred anyway. One thing is clear though. That is, at the point in time the one-day shipping promise was creating its strongest buzz, it failed to create profitable sales growth. It may be a subtle sign company felt forced to defend market share against the improving e-commerce work being done by Walmart ( WMT 1.51% ) and other consumer-facing companies.

To be fair, time may resolve last quarter's revenue growth and shipping costs disparity. The advent of Prime and two-day shipping eventually paid for themselves, and it's possible the additional costs linked to one-day shipping will do the same. That could take a long while though, and it will have to happen in a competitive environment in which competitors are more in tune with the Amazon threat.

Amazon's cloud computing arm, Amazon Web Services, or AWS, has been the company's breadwinner for some time now, and that didn't change last quarter. But, things are shifting within that unit's operation: It's not as profitable as it used to be. Last quarter's operating income of $2.26 billion for AWS was only 25% of its total revenue, down from 31% in the same quarter a year earlier. Through the first nine months of the year, AWS operating margins of 26% are down from 28% against the comparable prior-year period. It could be a sign that Amazon is offering price breaks, or spending more on features (or both) in an effort to abate its dwindling market share.

Granted, its share of the public cloud computing market is dwindling at an extremely slow rate. Canalys estimates its third-quarter share of 32.6% is only a tiny fraction less than the year-earlier figure of 33%. Both of Amazon's biggest rivals on this front though, Alphabet's Google and Microsoft, managed to add a measurable amount of market share last quarter -- more than Amazon lost. AWS is also seeing a clear deceleration in revenue growth as its rivals step up their game.

3. Amazon.com is less of a destination now than it used to be

Finally, research outfit First Insight shared some enlightening and curious data -- consumers are increasingly disinterested in Amazon.com. As of September of this year, 55% of respondents to the First Insight survey say they'd rather shop at Walmart than Amazon, an increase from 47% a year ago. And, respondents who were buying from Amazon.com six or more times per month fell from 80% two years ago to 40% in the current year. Conversely, First Insight's data suggests that the percentage of Amazon shoppers that only buy from it two or fewer times per month has grown from around 11% in 2017 to almost 40% now.

First Insight's CEO Greg Petro explained: "The excitement of the Amazon box coming to your house is kind of dwindling off."

No flashing lights or alarm bells

Any of this anecdotal data by itself might mean little. But in the aggregate, the fact that these trends point in the same broad direction should at least be a concern to put on your radar.

So why aren't more analysts or more investors voicing such concerns? It's unpopular, and even a little dangerous, to stand in front of a growth train like Amazon's that could simply coast for a while before red flags start to wave in earnest. The problem is, it may be too late to start thinking about the possibility of "peak Amazon" at that point.