Don't expect a repeat of Q3's amazing performance, but even without one there's a lot to like about JetBlue stock.

After buying back $380 million of its own stock in 2017, JetBlue quickly authorized -- and has already just about run through -- a new $750 million buyback program. Then it set up another buyback program in September -- worth $800 million!

Clearly JetBlue's stock is worth buying from its perspective. But how should you be looking at this stock? 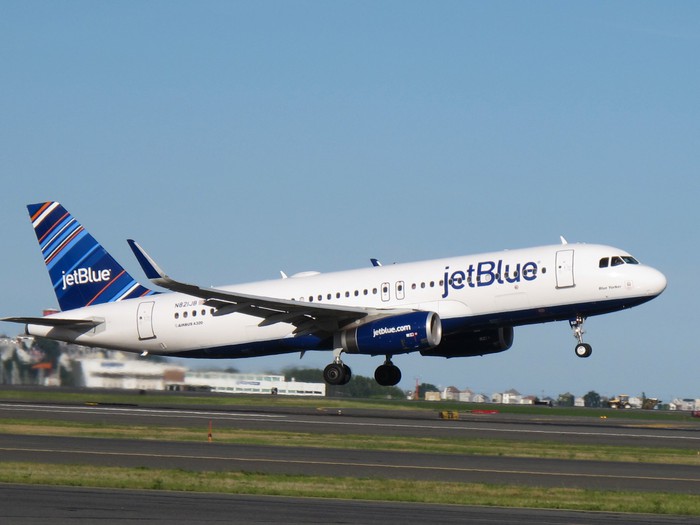 JetBlue recently reported its fiscal Q3 2019 earnings, in which the company transformed rather modest 4% growth in revenue into an impressive 274% increase in profits.

Admittedly, most of the "increase" in JetBlue's profit came from the absence in Q3 2019 of a one-time $112 million charge that was present in its Q3 2018 earnings. But even ignoring that positive quirk, operating income jumped 30% year over year. And with costs firmly under control as JetBlue heads into Q4, and capacity rising between 4.5% and 6.5% year over year, analysts are forecasting a modest 5% rise in profits in Q4 as well (according to S&P Global Market Intelligence estimates), leaving JetBlue stock with $1.95 per share in GAAP earnings by year-end.

Weighed against JetBlue's current share price of just under $20, that works out to about a 10x price-to-earnings ratio -- not bad for a stock that most analysts agree should be capable of producing 16% or better earnings growth over the next five years.

Granted, not all the numbers at JetBlue look as good as these "headline" figures. For example, that 10x P/E ratio I just mentioned is based only on JetBlue's official market capitalization. If you factor in the company's $2.5 billion in debt against the only $1 billion in cash the company has in the bank, JetBlue's enterprise value grows past $7.1 billion -- and the stock's valuation grows correspondingly richer.

Also worth noting is that JetBlue's earnings may not be of particularly high quality; the company's cash flow statement shows that the past year's $577 million in claimed earnings aren't fully supported by actual cash profits. During this same 12-month period, JetBlue's free cash flow amounted to only $361 million -- or about $0.62 in real cash profit generated for every $1 in claimed "net income."

But even so: $361 million in free cash flow for a company with $7.1 billion in enterprise value? That works out to less than 20x FCF for the company, which isn't an unreasonably high valuation for a stock growing at 16%.

And JetBlue stock could perform even better over the next few months than this valuation might otherwise suggest.

Recall that much of the American (and international) air travel industry has been struggling this year to balance passenger demand for air travel with an air fleet diminished by the grounding of Boeing's 737 MAX. JetBlue rivals such as American, United, and Southwest, all of which anted up early to order Boeing MAX aircraft for their fleets, haven't been able to make use of these planes most of this year while the FAA and foreign regulators mull when to allow the MAX aircraft to begin flying again.

That's not a problem for JetBlue, however, which flies a fleet entirely devoid of the beleaguered Boeing airplane. At JetBlue, the fleet is primarily Airbuses, with a few Embraer aircraft to lighten the regional load. And at least until the 737 MAX gets the green light from regulators once again, this should remain a significant advantage for JetBlue.

None of this is to say that I wouldn't mind seeing just a bit more cash flowing into JetBlue's coffers, at a time when it should be raking it in. But with a reasonable valuation, strong long-term growth prospects, and a significant near-term advantage on its side, I think JetBlue stock should perform well.