Investors had been enthusiastic heading into Shake Shack's ( SHAK -0.88% ) third-quarter earnings report thanks to strengthening operating trends this year. That optimism was powered by the fact that the chain returned to steady sales growth in early 2019 and was even winning higher customer traffic, outpacing rivals including McDonald's.

In its results this week, Shake Shack showed more progress along this growth path. However, those wins were overshadowed by soaring costs and a shifting expansion profile that together add lots of uncertainty for investors looking to judge the fast-food stock's long-term earnings strength. 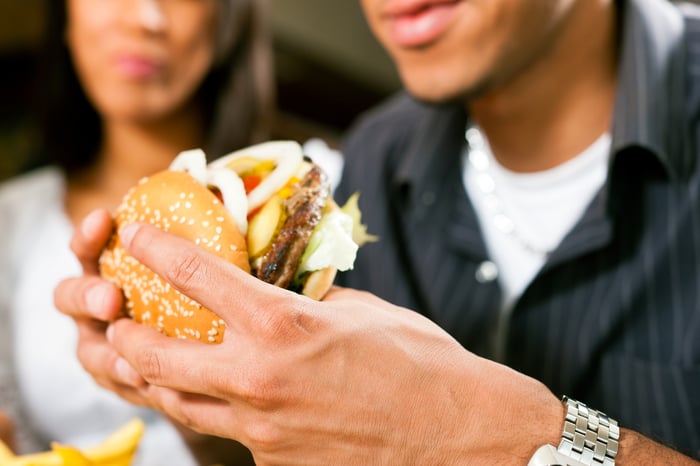 Revenue growth met management's forecast, with an increasing base of stores again delivering sales gains in excess of 30%. The restaurant base jumped to 79 locations from 54 a year ago.

But Shake Shack reported a growth slowdown at its existing locations, with comparable-store sales falling to 2% from 4%. Customer traffic growth was positive, but pricing gains were modest even as food costs jumped.

Management said Shake Shack's new partnership with Grubhub has disrupted the business as the chain drops integrations with other third-party aggregators. Grubhub has a weaker market position than these peers in many areas, and so moving to that exclusive offering hurt growth this quarter and will probably affect results heading into 2020.

Investors' picture of Shake Shack's business got cloudier on a couple of other fronts, too. The restaurant chain reported a significant drop in average weekly sales volumes at its stores. While that's to be expected given that Shake Shack is expanding away from its New York metropolitan base, shareholders saw no signs of stabilization on that key point.

More worrisome is the chain's soaring cost profile. Shake Shack reported higher spending on everything from chicken, beef, and labor to paper products and the mobile delivery rollout. These trends pushed restaurant margin down by 3 percentage points to 23% of sales. Notably, the cost pressures aren't expected to let up at least into fiscal 2020.

CEO Randy Garutti and his team affirmed their plans to open around 40 new locations this year and raised their expectations for licensed international store launches. The company's other outlook updates were almost uniformly negative, though.

Management now sees comps rising by about 1.5% rather than 2% this year, mostly because of the disruption from the Grubhub transition. Competition is also playing a role in that tougher selling environment.

Costs are projected to rise both at stores and at the corporate level. As a result, restaurant margin should now come in at around 22% of sales, instead of the 23% executives had predicted a few months ago. That figure stood at 25% last year and 27% in 2017, and two consecutive downgrades suggest the earnings news might continue to get worse before it starts improving.

Shake Shack still has a huge growth opportunity ahead, but worsening metrics like sales volume and operating margin mean investors can't be as confident in estimating the fast-food stock's value as they've recently been. And management's comments this week suggest that the profit picture isn't going to clear up until at least mid-2020.