As Japan inches closer to identifying the recipient of a license to operate the country's first legal casino, one of the major resorts that previously expressed interest in participating in the nascent gambling market may be getting cold feet.

Las Vegas Sands (NYSE:LVS) said in the past it would be willing to spend upward of $10 billion to build an integrated resort in Japan, but as the opportunity nears and the reality of how much it's really going to cost sinks in, it sounds like the global gaming giant is wavering on its commitment.

In comments to analysts on Sands' recent earnings conference call, COO Rob Goldstein said the company needs to more closely look at whether it would be able to generate appropriate returns for shareholders if it were to invest in a Japanese resort. 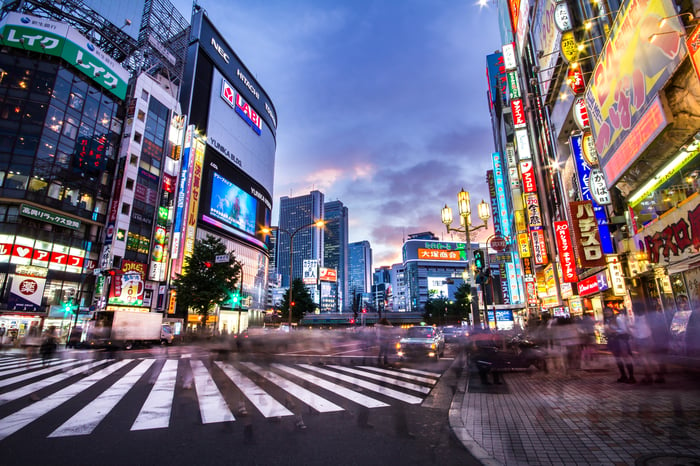 Tokyo is likely one of the few major cities where Las Vegas Sands will entertain pursuing a casino license in Japan. Image source: Getty Images.

The prospects for a completely new gambling market in Asia had casino executives across the industry salivating at the chance to build a resort in Japan. Particularly as China's economy slows and Beijing cracks down on money flowing through Macao, a new, nearby gambling mecca could be a lucrative investment.

Early estimates pegged the Japanese casino market as high as $40 billion annually, which would be equivalent to what Macao generated at its peak, though subsequent valuations put the Japanese market closer to $25 billion, still well ahead of the U.S. at over $11 billion and thus likely quite profitable for anyone building there.

But since then, even more hard-nosed estimates posited that the Japan market may be worth only $15 billion annually, which, while still enticing, also means the green-eyeshade types at the casinos began performing more rigorous cost-benefit analyses.

Japan plans to issue three licenses initially, and because Osaka will host the World Expo in 2025, it is expected to be the first city approved to issue a license, with others such as Tokyo and Yokohama expected to follow. Yet where there were eight casino operators originally vying for the Osaka license, the field has narrowed to three after Wynn Resorts became the latest to pull out of consideration.

Caesars Entertainment has completely withdrawn from the Japan market, saying it will focus on its merger with Eldorado Resorts instead, and Las Vegas Sands was one of the earliest to drop out. Goldstein's comments indicate why others might also be having second thoughts: The $10 billion many operators said they were willing to commit is now just "the starting point." A single casino will undoubtedly cost upward of $12 billion or more, or what it cost Sands and others to build all of their resorts and shopping malls in Macao combined.

No matter how good you are at this business, that must give you pause and stop and think, is that prudent? Can you really deploy, can you get the return? We've had those discussions, and we've had them with the Japanese government, and so our chairman and our board will make that decision ultimately.

Still on the drawing board

That sounds as if Las Vegas Sands has reservations about moving forward in Japan. While it probably hasn't abandoned its ambitions for entering the Japanese casino market, it's also clear it is not willing to build a resort in anything but a major city like Tokyo. Second-tier cities or those in outlying areas have been crossed off the list. Even Osaka is problematic because the resort will be sited on an artificial island that needs major infrastructure improvements to handle the expected influx of tourists.

It's possible others have run the numbers as well and don't see them adding up either. The economics of building in Japan still mostly make sense, but now the resort operators realize they won't be able to afford it at simply any price.