Shares of flooring and carpet company Mohawk Industries (NYSE:MHK) jumped 15.6% in October, according to data provided by S&P Global Market Intelligence. That handily outpaced the S&P 500's 2% growth for the month.

But there's a big caveat to these numbers: The jump didn't erase the beating Mohawk shares took in July, after management warned that the second half of 2019 would be "difficult." 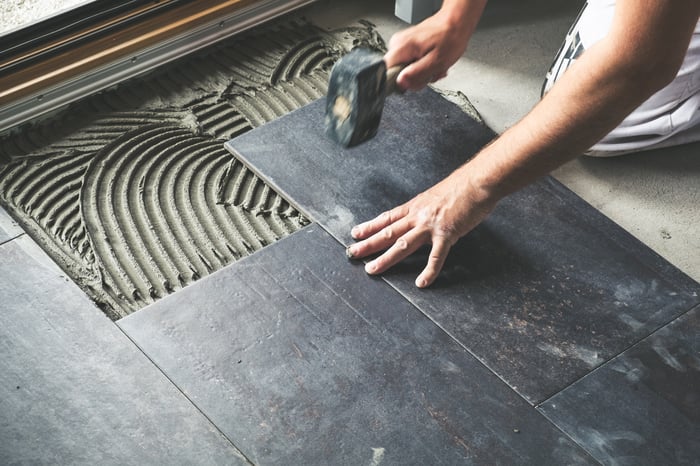 CEO Jeffrey Lorberbaum was frank in a press release announcing the company's Q3 2019 performance, saying: "Our third-quarter operating results were in line with our expectations, though we are not satisfied with our performance."

However, the results Mohawk posted were significantly better than investors had been expecting, given the dire warnings they received in Q2. So a 1% drop in revenue and a 16% drop in net income from the prior-year quarter apparently didn't look all that terrible. Even a large drop in diluted per-share earnings, from $3.02 in Q3 2018 to just $2.15 in Q3 2019, wasn't enough to deter investors.

Instead, the market focused on adjusted earnings per share, which came in at $2.75, better than the $2.64 per share that analysts had been forecasting.

But "not as bad as expected" was still pretty bad. In particular, the company's global ceramic (that is, tile) business saw a slight increase in revenue but a 28.9% decrease in earnings, thanks to a slowing global economy and industry oversupply. The company has launched a number of initiatives to try to right the ship, including adding new "easy-installation" tiles to its lineup and ramping up a new countertop plant in Tennessee, but it remains to be seen if they'll pay off.

The problems don't seem to be over for Mohawk, given the guidance the company released for Q4. Management expects adjusted earnings per share for the quarter to land between $2.13 and $2.23. Even if it hits the high end of that guidance, that's still a 34.8% drop from the year-ago quarter.

Until Mohawk can prove it has a workable plan to get growth back on track, investors are probably better off looking elsewhere for top stocks for their portfolios.