Online bank and investment company Ally Financial (NYSE:ALLY) seen its stock do well so far in 2019, rising 40% and significantly outpacing broader benchmarks of stocks in the consumer finance industry. This year's gain for Ally marks a significant turnaround from last year's 22% drop, when the bank struggled with declines in its automotive lending and insurance businesses.

However, after hitting a record high in September, investor sentiment toward Ally shifted, falling as much as 15%. Ally hasn't regained that prior peak even as the broader market rallied to new records. The reason has to do with the aspects of the economy that affect Ally's business the most.

Relying on the consumer

Many investors have looked at the trade dispute between the U.S. and China as a primary worry for the market as a whole. But the bigger concerns for Ally investors has to do with consumer sentiment and credit conditions that affect demand for big-ticket purchases like cars -- the biggest driver of Ally's lending activity. While the company has diversified into home lending, corporate finance and asset management, Ally still generates about 70% of its revenue from car loans as the successor to GMAC, the former automotive financing arm of General Motors (NYSE:GM). 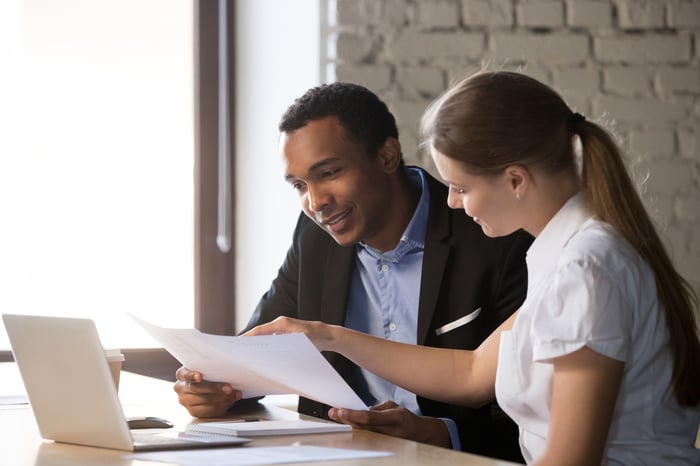 U.S. consumers feel less optimistic about the future than they did a year ago, and are especially concerned about income and job growth. The University of Michigan's Index of Consumer Expectations -- an indicator of what people think about the future -- declined 5.7% in October from a year earlier.

That negative sentiment has weakened vehicle sales, which slowed to a seasonally adjusted annualized rate of 16.5 million in October from 17.1 million in the prior month, according to Refinitiv Datastream. A decline to less than 16 million would mark a significant change in the prevailing trend of the past few years.

Concerns about the outlook are casting a shadow over Ally's record results, which last quarter included a 7% year-over-year gain in adjusted total net revenue to $1.62 billion and an 11% increase in earnings. Auto loan originations rose 15% from a year earlier to $9.3 billion. Those numbers are strong for now, but conditions could reverse if consumers get downbeat about their economic future.

Amid fears of worsening consumer sentiment, efforts to shore up the economy haven't yet had a big impact on key areas of Ally's business. For instance, the Federal Reserve has cut interest rates three times in the past several months. However, average rates on 60-month car loans remain just a tenth of a percentage point lower than they were in May before the Fed's rate cuts began. That's not enough to produce any significant savings on car loan payments.

Also, many consumers are starting to fall behind on their car payments and are less financially equipped to take on debt. The portion of auto loans that are 90 days or more past due climbed to seven-year highs during the first half of 2019, according to the Federal Reserve Bank of New York. That rising default rate indicates that consumers are getting overextended despite stable job growth and an unemployment rate at 50-year lows.

More worrisome is the growing number of consumers whose auto loans are bigger than the value of their cars. They build up negative equity each time they trade in a car without paying off the loan, and then roll that debt into a new car purchase. The portion of trade-in buyers who have negative equity in their cars has grown to 33% this year from 19% a year ago, according to data from car-shopping site Edmunds cited by The Wall Street Journal.

Looking ahead with caution

Slowing auto sales have yet to show up in Ally's results, with auto loan metrics that look stable. Its annualized net charge-off rate, a measurement of loans that aren't likely to be repaid, came in at 1.38% in the third quarter, which was consistent with recent results. Ally's 60-day delinquency rate rose by a tenth of a percentage point to 0.66% from a year earlier, and that may rise further in the fourth quarter with seasonal trends, but hasn't reached alarming levels yet. The bank's common equity tier 1 capital ratio, an indicator of its ability to absorb loan losses, ended the quarter at 9.6%, the highest in a year.

About 60% of Ally's auto loan portfolio consists of customers with prime or super-prime credit scores who are most likely to withstand a possible recession. The average FICO score of its borrowers was 688 in the third quarter, which is in the range of what's considered good credit.

During a regularly scheduled conference call with analysts last month, Ally CFO Jenn LaClair said strong used-vehicle prices and solid macroeconomic trends bode well for the company's outlook. Its average loan term of 70 months has been consistent in the past year, she said.

Nevertheless, Ally's solid earnings and revenue growth this year won't necessarily hold back the negative impact of worsening consumer sentiment and deteriorating credit conditions. If those trends persist, then it could hurt what's been a key source of loan growth for the financial services company.