Please ensure Javascript is enabled for purposes of website accessibility
Free Article Join Over 1 Million Premium Members And Get More In-Depth Stock Guidance and Research
By Jennifer Saibil - Nov 12, 2019 at 7:00AM

Will the decision to offer free delivery bring more customers or slash revenue?

Grocery competition continues to intensify as the rules of the game evolve and all of the major players throw in their hats to capture, or at least keep, their share of the market. With traditional modes of operation constantly being challenged in this industry, grocery store chains have to keep up with the new rules or risk losing customers.

Perhaps the main disruptor in the classic supermarket model is Amazon ( AMZN -0.76% ), which is of course not surprising considering it's disrupted any industry it's gotten its hands on, and it's not afraid to get its hands dirty in its quest to take over retail, hostilely or otherwise.

But the insatiable hunger for more can sometimes influence power brokers to make less than wise decisions. What went into Amazon's remarkable announcement last week that it's going to offer free grocery delivery to Prime members, and will this grand plan bring the company the hefty supermarket share it's been aggressively courting for years, or can it backfire? 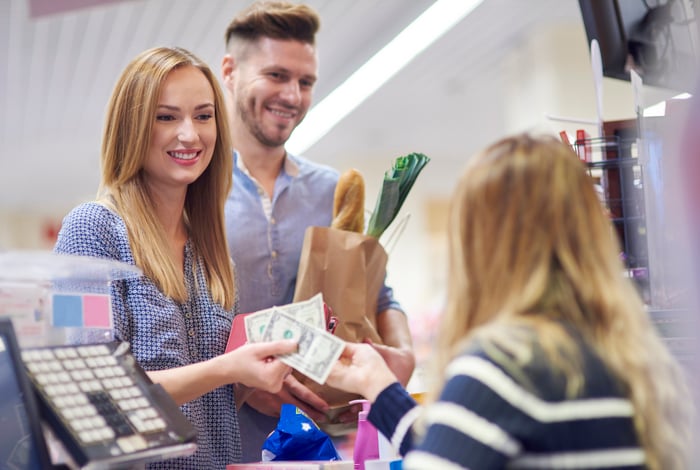 The main players in groceries

Online grocery shopping is currently but a pittance of the whole, at just over 2% of total grocery sales. However, more than a third of shoppers have shopped online, up from less than a quarter just a year ago.

The largest supermarket chains in the U.S. are Walmart ( WMT -1.88% ), of  which grocery accounts for about half of total sales, and whose revenue is more than three times that of its largest competitor, Costco, with Krogers, who owns smaller chains such as Dillons and Ralphs, coming in at No. 3.

Amazon has made many strategic moves to generate greater market share, profiling what customers want and trying to hand it to them. It first launched Amazon Fresh as an online grocer in 2007, thinking groceries would move online. But the venture failed, losing money every year until Amazon reconfigured and stopped the service in many areas in 2018. The company tuned into the fact that customers were still wed to in-store grocery shopping and bought Whole Foods in 2017, and it's currently working on opening up Amazon Go stores in larger cities, where customers can log in with an app and take products without having to wait on line.

However, so far, those moves have not catapulted the online leader into supermarket stardom. Enter free delivery.

Amazon is banking on its unparalleled infrastructure to be able to pull off fast, free delivery in a way that's unmatched to lure customers away from its competitors. However, fees are usually an integral component of large-company revenue, so purging delivery charges is going to have a strong effect on the company's bottom line. Amazon already announced that it plans to spend $1.5 billion in the fourth quarter alone to cover Prime one-day shipping costs, and its expected that this new plan will add another $11 billion to fourth-quarter shipping costs.

While some customers who were scared away by the $14.99 monthly delivery fee Amazon Fresh previously charged will opt-in now that it's free. Is this a market that's worth chasing? Customers who are concerned about the fee may also be hunting for deals they won't find on a web site. And with the grocery industries low margins, this may be a losing bet.

While this announcement might put the other top grocers on edge, they still have other advantages that Amazon can't beat. Walmart, which charges a $98 annual fee for delivery, has its own fully stocked stores and lower prices that it would be hard for Amazon to match.

Both Amazon and Walmart continue to pour money into online groceries despite the fact that the market is still in its infancy. Both are sweating to stay at the top, looking to play outside their own turf.

Ninety-five percent of Walmart's sales happen in-store, yet the company doesn't want to be left behind in the event that groceries really do shift online. Walmart is investing millions in its website to keep up on all fronts. Amazon, on the other hand, owns online retail, yet doesn't want to be left out of groceries, which are the second-largest expense for Americans (behind housing) and overwhelmingly happen in stores.

The two giants will duke it out, and that's great for all-American-style big business competition that only benefits the consumer and for investors looking for solid growth stocks. It also leaves openings for smaller third parties to get in on the fray.