T-Mobile (NASDAQ:TMUS) introduced three new Un-carrier initiatives this month alongside its announcement that its 5G service will go live on Dec. 6. It's pledging to offer free 5G service for first responders for 10 years. It'll give free internet access to 10 million underserved homes with school-age children. And for everyone else, it'll offer 5G prepaid plans starting at just $15 per month.

But there's a catch on these new initiatives: Consumers will only get those deals if it closes its merger with Sprint (NYSE:S).

Unlike previous Un-carrier moves, which have been aimed at AT&T (NYSE:T) and Verizon (NYSE:VZ), this one is aimed at getting a coalition of attorneys general from nine states and the District of Columbia to drop their suit against the merger.

T-Mobile is pointing out the potential for New T-Mobile to provide a public good while opponents worry about the possible impact on competition. 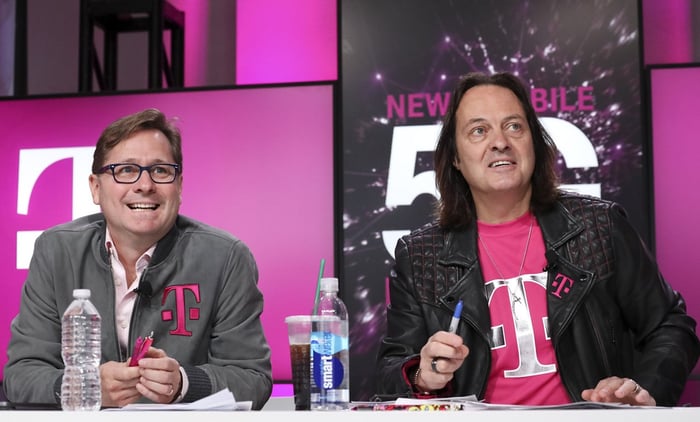 Service for those that need it most (and have influence)

T-Mobile's plan to offer free service to first responders isn't just a random act of kindness. The company has been actively pursuing first responders recently with promotional offers, likely because they actually have sway with attorneys general.

There's some intense competition for first-responder business. AT&T owns the FirstNet contract, which gave it access to additional wireless spectrum licenses from the government in exchange for offering lower-priced plans for first responders. Verizon also has a strong presence with first responders, and it provides considerable discounts, but it suffered a significant setback after throttling data speeds for firefighters fighting California wildfires last summer.

Meanwhile, T-Mobile barely has a foot in the fire station door, so it's not risking any of its existing revenue streams by offering free service. Furthermore, providing free wireless service could open things up for it to offer additional services for connecting police and fire stations, which can be valuable contracts. The net cost for T-Mobile for giving free service to first responders is fairly minimal. The upside, however, is considerable, especially if it helps push the merger through.

T-Mobile will also pledge to serve 10 million underserved households with home internet service if it gets the merger approved. The service is relatively limited, however, with just 100 GB of data per year for a household. Still, the ability to go from no service to limited service could have a meaningful impact on lower-income homes.

The move will leverage the combined network capacity of T-Mobile and Sprint. T-Mobile expects that additional capacity to enable it to offer home broadband service to more than 50% of the population with minimal marginal costs because it's using the same network to offer wireless service.

Attorneys general may have a tough time saying that blocking the deal is in the public's best interest now that they're faced with the proposition that they'll be denying millions of homes free access to the internet.

One fear of the merger, which removes a major competitor from the market, is that it'll negatively impact consumer pricing for wireless service. To that end, T-Mobile has already agreed to keep its prices stable for six years.

The new Un-carrier plans include two new prepaid offerings, one for $15 per month and one for $25 per month. Both plans are priced below anything from AT&T or Verizon, and even offer better deals than most mobile virtual network operators. T-Mobile has committed to locking in those prices for five years while also increasing data allotments for each year a customer stays subscribed.

The move should appeal to price-sensitive consumers and those with limited wireless data needs. It should also add another layer of defense against the prosecutors' claims that the merger is anti-competitive and bad for consumers.

T-Mobile has made some significant concessions and promises to get its merger agreement approved. These additional promises put further pressure on attorneys general to allow the deal to proceed despite long-term doubts. T-Mobile and Sprint will go to actual court next month, but their campaign in the court of public opinion has already started. Management still expects the merger to close early next year.