Please ensure Javascript is enabled for purposes of website accessibility
Free Article Join Over 1 Million Premium Members And Get More In-Depth Stock Guidance and Research
By Kristina Zucchi - Nov 12, 2019 at 9:05AM

How the diagnostics company could be poised to profit from the companion animal industry.

Last week I took my dog Sully to the vet because he wasn't eating (and as anyone who has a Lab can tell you, almost nothing comes between them and their food!). An exam, blood test, and an X-ray later, he was diagnosed with gastritis and given some medicine -- all for the low price of $468. I didn't think twice about the size of the bill because, well... he's a part of our family. I'm not alone in that sentiment: 98% of pet owners feel the same, according to a 2016 survey by The Human Animal Bond Research Institute Foundation in partnership with Cohen Research Group. This close attachment to our pets is precisely what IDEXX Laboratories ( IDXX -2.08% ) is banking on. 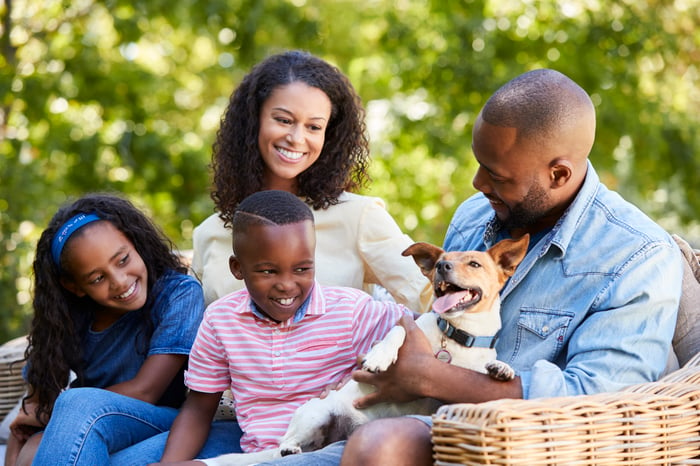 IDEXX develops and manufactures products and services for companion animal and livestock veterinary, as well as for water quality testing. Think of it as the Quest Diagnostics for animals.

IDEXX estimates the global companion animal diagnostics market at $33 billion, but only 11% of that is penetrated today. With nearly 90% of the market underserved, the opportunity for any company is vast. Based on the past five years' rate of growth, IDEXX estimates that global companion animal diagnostics could expand roughly 8% per year for the next 25 years and still not fully penetrate the available market.

As one of the market leaders, IDEXX serves approximately 5% of the available market. Competitors range from large companies like Antech Diagnostics (a division of Mars Inc), Heska Corporation, and Zoetis to many smaller ones. But with a large underserved population, market share is up for grabs.

Pet care is at its core

IDEXX feels the love we have for our pets — 87% of its revenue is generated by its companion animal diagnostics segment, with nearly two-thirds of that coming from the U.S. It grew 11.9% in 2017 and 13.6% in 2018, and management forecasts growth will be 9% to 13% each year for the next five years. Margins have also been rising: Gross margins improved 14% annually for the past three years, and operating margins expanded more rapidly—between 18% and 21% each year.

The animal diagnostic industry is not unlike the human one: Market leaders need to have innovation prowess, a robust distribution model, and an integrated IT platform. IDEXX delivers on all fronts, from its newly developed diagnostic testing instruments to the breadth of its software offerings, including electronic health records. In addition, its direct distribution model allows the company to forge close relationships with its customers and keep retention high. Part of that retention stems from having innovative instrumentation. In 2018, IDEXX spent between 5% and 6% of its annual revenue on research and development.

But unlike the human diagnostic market, the companion animal one has a distinct advantage: Veterinarians, for the most part, do not have to deal with insurance companies. U.S. healthcare's convoluted structure, in which consumers receive care but insurance companies pay for the services, means that diagnostic companies, like providers, are forced to negotiate prices with the payers. In its second-quarter earnings call, for instance, Quest Diagnostics attributed part of its lower earnings to Medicare pricing pressure; LabCorp blamed contract changes and the implementation of the Protecting Access to Medicare Act for its lower margins. These headwinds do not exist in the animal health industry. Therefore, veterinarians can perform tests they deem necessary without a choke hold from an outside force. However, because of the high out-of-pocket costs, some pet owners may be unwilling or unable to pay for expensive tests, lowering the actual available market opportunity.

A model that keeps giving back

Like other diagnostic players, IDEXX uses a razor-and-blades business model. Once a testing instrument is sold and installed -- sometimes at a minimal profit — the company has a recurring sales stream from single-use consumables, like testing strips, that are necessary to operate the instrument. This revenue is highly profitable and accounts for nearly 90% of IDEXX's total company sales. The launch of its SediVue Dx instrument in 2016 exemplifies the benefits of the model. The installed base grew from 1,500 units in the first year to nearly 6,600 two years later. During that time, segment revenue grew 27%, while gross profits rose 30%. This example illustrates the connection between installed instrumentation, revenue growth, and margin expansion (although this one installed instrument was not the only reason for the growth). IDEXX's recurring revenue grew over 13% last year. As its installed base expands, sales should increase at an even faster rate.

IDEXX serves almost half of the penetrated companion animal diagnostics market today, putting it in a leadership position. The market has recognized this: Its stock is up 33% this year. But the stock is not cheap. Trading at a 2020 price-to-earnings (P/E) multiple of 48 times, it is more expensive than competitor Zoetis, but less than Heska. However, when considering its growth rate, IDEXX's P/E-to-growth (PEG) ratio of 2.8 times is more desirable than Zoetis' or Heska's. But its free cash flow (FCF) yield is lower: 1.1% compared to 2% and 1.3%, respectively. Although the company has shown balance sheet discipline recently, using its cash to pay down debt, its long-term debt-to-total assets was still high in 2018, at roughly 39%. At the same time, its current ratio, while above the 1.0 threshold that signals short-term liquidity is intact, is only 1.15.

The expanding market and IDEXX's growth expectations point to an attractive investment opportunity, but it may not be for everyone: Its expensive multiple, low FCF, and debt load suggest that risk is elevated, and a more desirable entry point may be worth the wait.

Is It Too Late to Buy Idexx Laboratories?

Why Idexx Laboratories Gained 13% in June