Please ensure Javascript is enabled for purposes of website accessibility
Free Article Join Over 1 Million Premium Members And Get More In-Depth Stock Guidance and Research
By John Bromels - Nov 12, 2019 at 6:28AM

Shares of British medical equipment manufacturer Smith & Nephew ( SNN -1.69% ) tumbled 10.2% in October, according to data provided by S&P Global Market Intelligence. Virtually all of the drop came on Oct. 21, when the company announced the surprise departure of CEO Namal Nawana, who had only been on the job for 18 months.

Nawana took a pay cut to join the U.K. maker of artificial joints: As the CEO of U.S.-based medical diagnostics company Alere, he made as much as $11.1 million a year. However, British rules regarding CEO pay are much more stringent than in the U.S.; Smith & Nephew's 2018 annual report lists his salary for the first seven months of his tenure as $2.9 million, including pension and benefits. 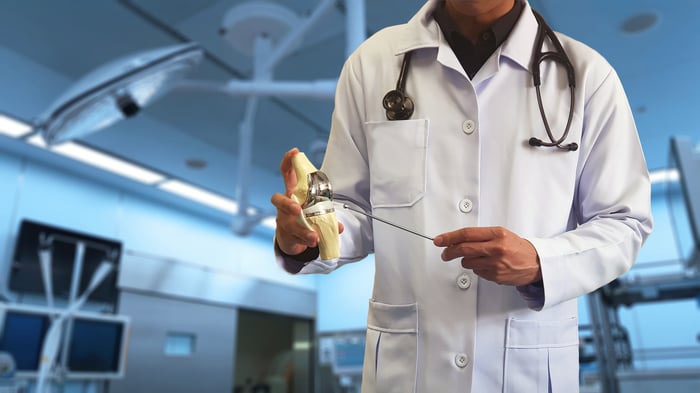 Clearly, however, that wasn't enough for Nawana: The company even considered relocating its headquarters to the U.S. to be able to meet his pay demands, but ultimately decided against it.

By all accounts, Nawana was an able CEO: He created a strategic plan for reorganizing the company and presided over a period of revenue growth. The company seems keen to continue his strategy under new CEO Roland Diggelmann, who formerly headed Roche Diagnostics (not to be confused with its sister division under the Roche umbrella, Roche Pharmaceuticals).

It's never good when a CEO departs a company suddenly, but in this case, it's better for him to have departed because of a pay dispute than for other reasons that might have had a bigger impact on the business.

One interesting facet of the departure is that it may end speculation that Nawana was brought on to sell Smith & Nephew. In 2017, Nawana engineered the sale of Alere to Abbott. But if a quick sale had been in the cards here, wouldn't he have stuck around to see it through?

Even with the drop in price, though, the company still trades at 26.5 times earnings, which is on the high end of both its recent historical range and its peer group of artificial joint makers. With the company still in the middle of an unfinished reorganization plan, investors should probably sit this one out, for now.