Cannabis stocks have lost much of their appeal over the past few months. With both small and large caps losing a significant chunk of their market value, investors are right to wonder how much longer the cannabis sector will continue to fall.

Canopy Growth (NASDAQ:CGC) and OrganiGram Holdings (NASDAQ:OGI) have been among the most noteworthy cannabis companies in the large- and small-cap realms, respectively. While both stocks have seen their market values decline by over 60% over the past six months, there's a case to be made for both of them now that they're so discounted.

With some analysts arguing that pot stocks are close to bottoming out, now might be the time to start buying again. Here's how both of these companies compare and which is currently the better buy. 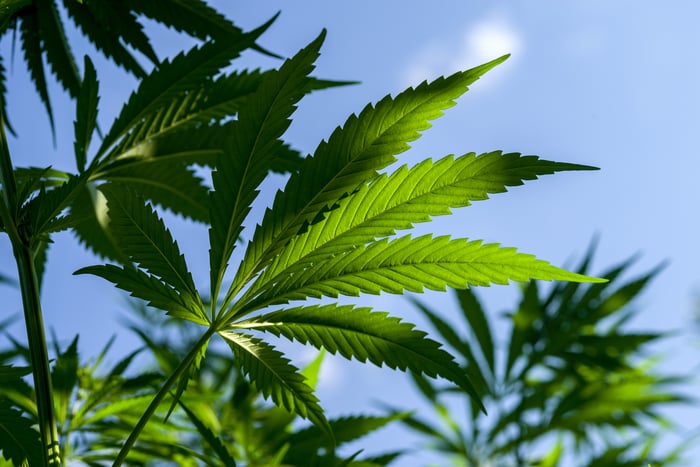 What's the verdict on Canopy Growth?

Canopy Growth took a big hit back in August when it posted a $1 billion loss in its fiscal first-quarter 2019 financial results, something that startled many investors who weren't expecting Canopy to lose so much money in just one quarter. The good news is that most of those losses came from mergers and acquisitions activity, which can be scaled back by management. Canopy also has a healthy $2.35 billion in cash reserves to draw upon, so it still has plenty of financial room to work with.

What investors are really looking for in Canopy Growth are signs of profitability, and setbacks in this regard end up severely hurting stock prices. That's exactly what happened to rival large-cap cannabis producer Aurora Cannabis when it not only failed to report a profit in its fiscal Q4 2019 results, but warned investors that it was pushing back when it expects to finally turn a profit until sometime in 2020. If Canopy sees another quarterly loss, it wouldn't be surprising if investors reacted similarly as profitability continues to elude the cannabis giant.  At present, the pressure is high for Canopy to make at least some progress on this front, but even if it does dial back on its expenses, it's unlikely that Canopy will see a profit anytime this year.

Even though Canopy has lost most of its market value so far in 2019, however, it is uncertain whether this makes the stock a good buy right now. Canopy is still looking for a new CEO after its iconic founder and former co-CEO Bruce Linton was fired from the company due to larger-than-expected financial losses. While the current interim CEO, Mark Zekulin, is holding the reins for now, it wouldn't be surprising to see a change in strategy once a new CEO takes charge.

Another area where Canopy can pick up additional revenue would be the CBD beverage market in Canada. But there's already a good deal of competition from other competitors such as HEXO that already have a CBD beverage product line prepared for launch. Considering that the CBD beverage market isn't that large, with some research groups predicting the market will grow to just $2.05 billion by 2026, this area might not be as much of a cash cow for Canopy as some investors originally anticipated.

Overall, there's still a lot of uncertainty in store for Canopy in the near future. However, its partnership with Constellation Brands remains a major vote of confidence for the cannabis giant, and over the long term, Canopy's established position in the industry isn't likely to change that much.

The pros and cons for OrganiGram

OrganiGram is a small Canadian producer that has earned an impressive reputation. As one of three Canadian producers to boast sales agreements with all 10 Canadian provinces (with the other two being Canopy and Aphria, and CannTrust Holdings having lost its license following its scandal), OrganiGram is in an envious position as a supplier.

The company also one of the most efficient cannabis producers in the market. OrganiGram's annual output is estimated to grow from 36,000 kilograms to 113,000 kilograms by the end of the year based on a single 490,000-square-foot facility. These figures would mean OrganiGram has an impressive crop yield of 230 grams per square foot, almost double that of Aurora's 125 grams per square foot and more than twice the industry average.

It's also the only major cannabis producer to be based out of Canada's easternmost province, New Brunswick. While having a smaller population and overall market size in comparison to provinces like Ontario and Quebec, Canada's easternmost Atlantic provinces have relatively little competition from major producers. Considering the fact that New Brunswick also has the highest proportion of cannabis users in relation to its overall population, OrganiGram is well suited to dominate this portion of the Canadian market if nowhere else.

However, there are some reasons to be concerned with OrganiGram. With the majority of its business focused on supply in the Canadian provinces, the slow rollout of retail dispensaries in the main cannabis-consuming provinces of Quebec and Ontario have set back the company's original growth estimates. Net revenue for its fiscal third quarter ended up falling in Q3 2019 to $24.8 million in comparison to the $26.9 million from the previous quarter. To OrganiGram's credit, though, adjusted EBITDA came in at $7.7 million, making it the fourth quarter in a row that the company has seen a positive EBITDA. In the cannabis world, very few companies are showing signs of profitability, and OrganiGram's positive earnings figures are a very good sign.

Despite their differences, there's a strong case to be made for both cannabis companies, but I'd give OrganiGram a slight edge over Canopy if I had to choose just one of these companies to invest in right now.

While Canopy still has plenty going for it, OrganiGram is trading at a much cheaper valuation in comparison. Canopy currently has an 18.6 enterprise value-to-sales ratio (EV/S), in line with competitors like Aurora and HEXO, which trade at 20.6 and 22.3 times EV/S, respectively. OrganiGram, on the other hand, trades at a much cheaper 9.9 times EV/S.

OrganiGram is already showing signs of profitability thanks to its four consecutive quarters of positive earnings, while Canopy can't say the same. At a much smaller $756 million market cap in comparison to Canopy's $8.91 billion, OrganiGram still has plenty of room to grow without needing to spend aggressively on acquisitions. While Canopy appeared to be a better investment a few months ago, a lot has changed in the cannabis market since then. OrganiGram's efficiency, earnings profitability, as well as its current price make the stock a good deal at the moment.