LG Display (NYSE:LPL) has a lot in common with Universal Display (NASDAQ:OLED). Both generally ply their trade in the digital screen market: LG Display on the manufacturing side and Universal providing high-tech technology solutions for screen builders to use. LG is indeed a high-profile customer of Universal Display, so their guiding business principles will often look very similar.

Both are also 5-star stocks in our Motley Fool CAPS system (out of 5), which indicates two incredibly strong investment ideas. So which one should you buy today if you only had enough funds to start one new position? 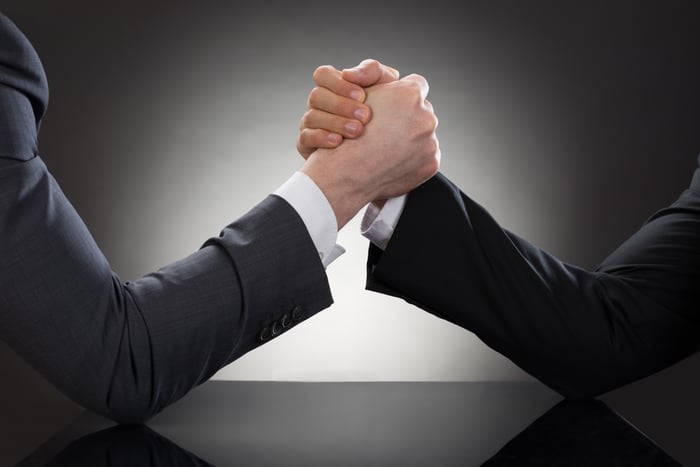 The case for LG Display

If you prefer to invest in larger businesses with effective economies of scale, that makes LG Display your pick here. The company collected $20.8 billion in revenue over the last four quarters along with $2.8 billion of EBITDA profits. Universal Display can hardly hold a candle to those figures, posting $247 million in trailing sales and a mere $87 million in EBITDA profits. You could describe Universal Display as a mere series of rounding errors in LG Display's far larger business model.

The stock also trades at rock-bottom prices right now. You can pick up LG Display shares at an enterprise value of just three times EBITDA or a price-to-book-value ratio of 0.36. The stock stands 37% below its 52-week highs today amid a glut of Chinese display panels flooding the global market. If you expect LG Display to survive the resulting price pressure, this could be a fantastic time to start a position in hope of a huge turnaround.

The case for Universal Display

I find it difficult to present a credible investment thesis for LG Display, because those turnaround efforts may not pay dividends in the end. The same bargain-bin share prices that make that stock look affordable today also remind me of big red flags.

Universal Display may be a smaller business than LG Display, but it's also far healthier. Its smaller revenue stream has grown at an annual clip of 11% over the last five years while LG's sales fell by 2% a year over the same period. The company is profitable in terms of ordinary earnings and free cash flows but LG Display can only report positive profits under more obscure metrics like EBITDA -- which removes the mostly negative effects of carrying heavy debt on your balance sheet.

I'm watching a nimbler competitor in a less capital-intensive part of the display market run financial circles around LG Display here. Universal Display is a fast-growing provider of key technologies to manufacturers such as LG Display. I don't expect this company to ever enter the screen-building sector on its own because technology licensing comes with much wider profit margins and a potential target market covering essentially the whole world. And we haven't even started talking about lighting panels yet. That should be the next big growth driver for Universal Display once the smartphone and big-screen TV stories play themselves out.

Look, I don't think that LG Display is on its deathbed today. The company should pull back from the edge of a cliff as the oversupply situation gets sorted out, and the stock could deliver a big bounce from today's low prices. If you like to live dangerously, LG Display could be your ticket to paradise.

But that stock can't compare to the proven growth muscle and steady cash generation I see in Universal Display. I will happily keep an eye on LG Display but I actually own Universal Display in my real-money retirement portfolio -- and I have no intention to sell it for many years to come.