Coca-Cola (NYSE:KO) recently unveiled AHA, a new line of flavored sparkling water drinks, in the beverage giant's first major brand launch in over a decade. It's launching with six fruit blends: Apple and Ginger; Blueberry and Pomegranate; Lime and Watermelon; Orange and Grapefruit; Peach and Honey; and Strawberry and Cucumber.

It's also launching two "jolted" mixes -- Citrus and Green Tea, and Black Cherry and Coffee -- which each contain 30 mg of caffeine. The AHA brand will replace Coca-Cola's Dasani-branded sparkling waters, which never gained much traction against other major brands, when it launches next March.

Let's see why Coca-Cola is aggressively expanding into the flavored sparkling water market, and what it could mean for National Beverage's (NASDAQ:FIZZ) La Croix.

Another step away from sugary sodas

Soda consumption in the U.S. is currently near a three-decade low, according to Beverage-Digest, and that tepid demand is reflected in many other countries. Health-conscious consumers are pivoting away from those sugary drinks, as tougher regulations -- like soda taxes in certain markets -- exacerbate the pain.

That paradigm shift seems like a major headwind for Coca-Cola, but it wisely countered that trend by expanding its portfolio with bottled water, juices, teas, sports drinks, energy drinks, coffee, and even alcohol. It also launched zero-sugar and low-calorie versions of its flagship sodas.

Those moves enabled it to post stable organic sales growth over the past five years, and Coca-Cola expects its organic sales to grow "at least" 5% in 2019. 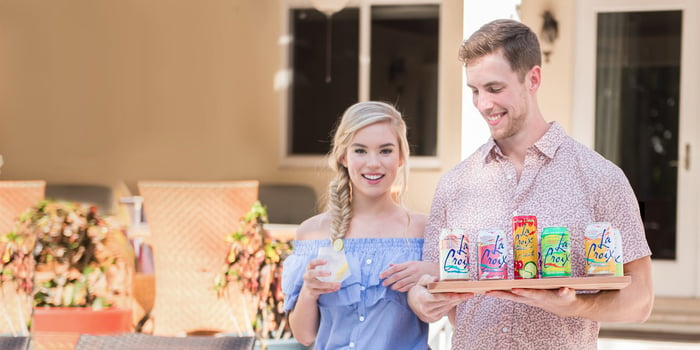 National Beverage acquired La Croix, which was originally launched in 1981, in 1996. National rebranded La Croix as a healthier alternative to sugary sodas in the early 2000s, and its sales accelerated significantly. But demand for La Croix plunged last year, and analysts expect its years of growth to end with a 6% sales decline this year.

The past three years weren't kind to National -- its founder and CEO Nick Caporella was sued over sexual harassment allegations (which were later withdrawn by the accusers), and the company was hit by a lawsuit that claimed that it doesn't use "all natural" ingredients.

Caporella's bizarre defense of his company in press releases -- in which he blamed La Croix's decline on "injustice" and compared the brand to a "handicapped" person -- also sparked concerns about the 82-year-old's ability to lead the struggling company. To make matters worse, big beverage makers like PepsiCo, Nestle, and Coca-Cola smelled blood and took aim at the faltering market leader.

During the same period, privately held Talking Rain's share grew from 16.7% to 17.4%, and PepsiCo's Bubly's share nearly tripled from 2.3% to 6.5%. PepsiCo believes that Bubly, which was launched last year, could eventually become a billion-dollar brand.

This indicates that La Croix doesn't have much of a moat against major soda makers like PepsiCo and Coca-Cola, which can both leverage their scale in production, logistics, and marketing to disrupt the sparkling water market.

The sparkling road ahead...

Coca-Cola's introduction of AHA seems much more thoughtful than its development of Dasani sparkling water, which merely followed other bottled water brands into the flavored seltzer market. Its introduction of carbonated Smartwater in 2015 also didn't turn too many heads.

During last quarter's conference call, CEO James Quincey admitted that Coca-Cola's water category was not "as strong as we'd like," and that the company was "working on further plans to address this in the marketplace in the near future." AHA seems to be its first big step in that direction -- and it could be dire news for National Beverage's investors.

Editor's Note: A previous version of this article incorrectly stated that "a long list of senior executives resigned" at National Beverage over the past three years, and that "the company was hit by additional lawsuits that claim that it doesn't use … 'BPA-free' cans." The Fool regrets the errors.