You only get one chance to make a first impression, and Datadog (NASDAQ:DDOG) apparently nailed it in its first financial report as a public company. The provider of cloud monitoring and analytics tools moved sharply higher after posting better-than-expected third-quarter results shortly after Tuesday's close.

Revenue soared 88% to hit a record $95.9 million for the three months ending in September, an impressive feat since investors saw Datadog's top line slow to 79% growth through the first half of this year after last year's 97% surge in revenue. Investors were betting on continued deceleration, as analysts were forecasting a mere 66% year-over-year top-line increase. The good news didn't stop there. 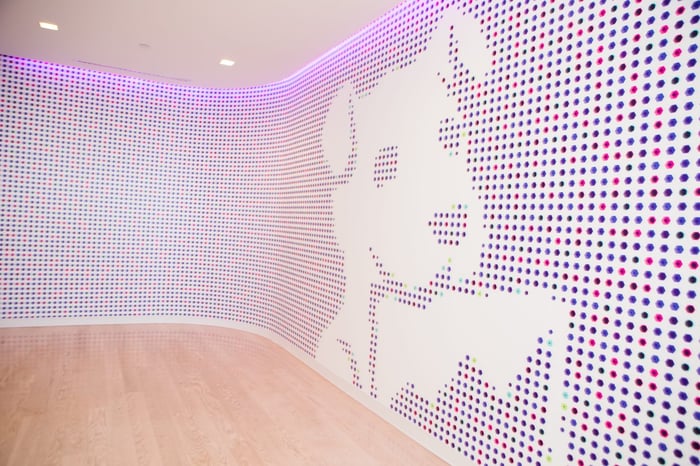 This dog could be an investor's best friend

Datadog isn't expected to be profitable for a couple more years, but it surprised analysts by reporting a narrowing deficit -- and actually breaking even on an adjusted basis. The popularity of its platform that keeps tabs on a cloud's uptime as well as general cloud health keeps growing.

The ideal client for Datadog is a large company with a cloud presence, and one in which the different developers, IT operations teams, and business users need to be on the same page with visibility across all of an organization's silos. Datadog customers tend to be big spenders on the platform, with 727 customers generating an annual revenue run rate of at least $100,000 (nearly doubling over the past year).

Datadog didn't divulge its dollar-based net retention rate in its earnings release or during the subsequent conference call, a surprising move for a company that turned heads when it went public with its prospectus boasting a rate of 146% at the midpoint of 2019. The metric is likely holding up just fine given Datadog's explosive growth for the quarter.

Guidance is another highlight in Datadog's first financial report as a public company, even if revenue will slow sharply in the current quarter. The company expects to crack into the nine figures for the fourth quarter. The $101 million to $103 million that Datadog is modeling is just a 64% to 67% year-over-year advance, but analysts were settling for just $91.5 million on the top line, or 49% growth. Datadog also sees a much smaller adjusted deficit than what Wall Street pros were expecting.

The company's full-year outlook is even more impressive. It sees $350 million to $352 million in revenue for all of 2019, more than $20 million above the $330.2 million that analysts were projecting. If there were any concerns that Datadog went public two months ago as an exit strategy because its business was peaking, those fears can now be laid to rest.

Investing in IPO stocks isn't for the risk-averse, and Datadog's valuation isn't cheap at an enterprise value that is more than 30 times its trailing revenue. However, a blowout quarterly report out of the gate sets the right tone. Datadog's bite is as strong as its bark.