Tuesday's debut of Disney's (NYSE:DIS) new streaming service got off to a rocky start. Folks showed up, as there were nearly 2 million video fans signed up for Disney+ ahead of its launch according to a third-party analytics provider Jumpshot. Unfortunately, the platform wasn't ready for the masses.

Many Disney+ subscribers were repeatedly bumping up against error messages, and it wasn't long before #DisneyPlusfail began trending as a hashtag, even as Disney was paying for #DisneyPlus to stand out as a promoted hashtag. If a Disney debut going wrong because it wasn't ready for primetime sounds familiar, it's because a similar scenario played out when Disney opened Disneyland in the summer of 1955. 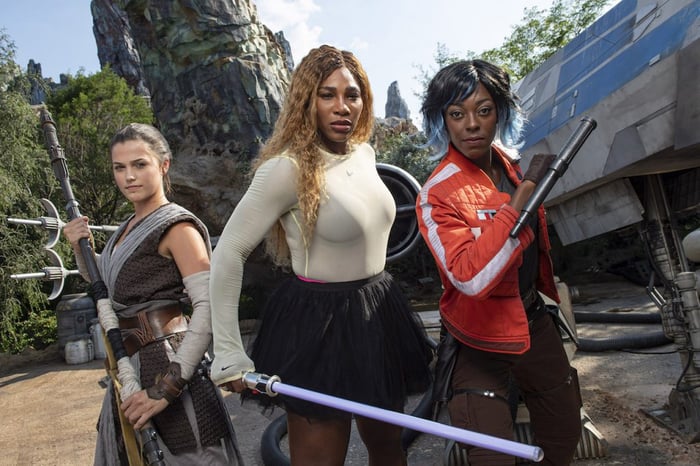 The sequel is sometimes better

The opening of the original Disneyland park in Anaheim shares a few similarities to this week's launch of Disney+. There was plenty of buzz leading up to both debuts, with the media mogul using other mediums to promote its new offerings. Both events also had no problem drawing a crowd.

However, if you think that running into some error messages and network outages is bad, see if you can stream The Imagineering Story, a new documentary series on Disney+ that details the company's bar-raising theme-park achievements. The first -- and so far only -- available episode offers insight into the early years at Disneyland, and that includes a notoriously rough start.

The documentary has park execs detailing the various mishaps that happened on Disneyland's first day of operations. A plumber strike resulted in Walt Disney having to choose between the toilets and the water fountains to work on opening day, and he rightfully chose the former. Asphalt in some parts of the park hadn't fully set, and on that hot July 17 afternoon, some guests had their heels get stuck on the blacktop. There was also a flurry of counterfeit admission tickets, overcrowding the already slammed park.

The good news here is that things naturally worked out swimmingly for Disneyland. Disney would go on to raise the bar in the industry, and amusement parks everywhere turned into copycats. The water fountains started running, asphalt hardened, and Disney got better at detecting bogus tickets. Disney+ will get over Tuesday's hiccup, even if Disney's own dedicated Twitter account publicly owned up to the issues and ultimately asked for subscriber patience.

Things could've gone worse, and just as folks often judge a new ride's popularity based on the length of the line to ride it, one can argue that Tuesday's setbacks are ultimately good for business. Having a platform go down for many of its users throughout the day may be embarrassing in the near term, but there's also something to be said about getting slammed at launch because it drew too many video buffs. This is the week that births urban legends

Disney will continue to be a top consumer discretionary stock. The media giant will look back and laugh at how it struggled to handle nearly 2 million users this week, just as it can now look back at Disneyland's opening blunders with a sense of accomplishment. When it's running smoothly with its audience north of 10 million come early next year, it will leave Nov. 12, 2019 as just a juicy footnote. Disney gets it, even if many Disney+ subscribers didn't get the platform at its best yesterday.