Tiffany’s position in the jewelry market, its earnings growth, and its valuation mean it can continue along just fine without French luxury giant LVMH.

"I'd marry you for your money in a minute," Holly Golightly said to her love interest in Breakfast at Tiffany's, the 1961 film that put a spotlight on luxury jeweler Tiffany & Co. ( TIF ). These days, Tiffany is not saying the same to its potential suitor, LVMH ( LVMHF -0.90% ). And considering the company's earnings, share price, and position in the jewelry market, it doesn't have to. 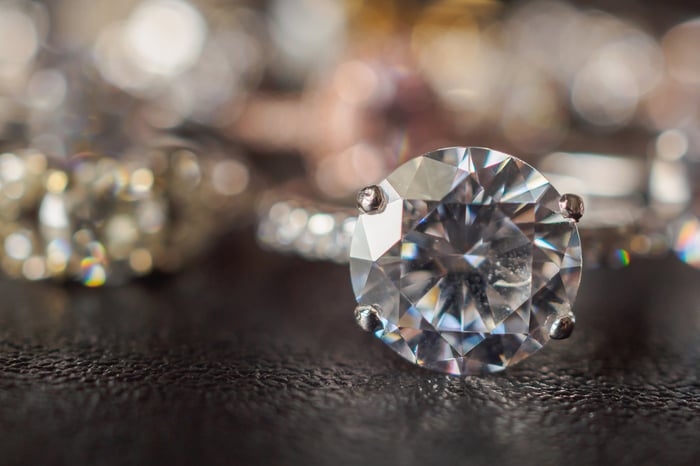 First, a little summary: LVMH, owner of the Louis Vuitton brand, last month offered to buy Tiffany for $14.5 billion, or $120 per share. Tiffany's stock, previously trading at about $98 a share, rose by 25% to surpass the offer price. Last week, Reuters reported that Tiffany has asked LVMH to raise the bid.

An enviable spot in the jewelry market

LVMH towers over Tiffany in terms of size, with a market value of $222 billion compared with Tiffany's $15 billion, but Tiffany holds an enviable spot in the jewelry market. Jewelry, Tiffany's main product, represents 92% of the company's sales worldwide. Jewelry and watches is one of LVMH's smallest businesses, representing only 9% of revenue, so an acquisition of Tiffany could boost its presence in the segment. For luxury goods companies seeking more growth, jewelry is the place to be. Jewelry was among the top growth luxury categories last year, up 7% according to a report by global consulting company Bain & Co., and the study's authors predict the global personal luxury goods market will expand by 3% to 5% per year through 2025. Tiffany will benefit from this, with or without LVMH.

In spite of Tiffany's fame, the company's story looked dim a few years ago as it struggled with earnings and an audience that didn't follow its image of classic elegance. Alessandro Bogliolo took on the post of chief executive officer in 2017 and led a turnaround that included introducing less expensive items and targeting millennials. The result? The sparkle returned to Tiffany's earnings, and they continue to shine.

The full-year outlook remains bright. Tiffany maintained its earlier forecast for a low-single-digit percentage increase in worldwide net sales and a low- to-mid-single-digit percentage gain in net earnings per diluted share year over year. So on an earnings level, Tiffany has what it takes to go it alone -- or wait for a bigger and better deal from LVMH or another suitor. This year, the company's second-quarter earnings topped analysts' estimates for the third consecutive quarter, though the overall report was mixed. Unrest in Hong Kong was partially responsible for a slump in sales. The retailer makes 20% of its Asia-Pacific sales in Hong Kong.

Tiffany's valuation is another reason to hope for a better deal or no deal at all. The shares are in line with or cheaper than those of its peers, trading at 27 times earnings compared with 35 for Gucci owner Kering ( PPRUY -1.51% ) and 27 for Cartier owner Richemont ( CFRUY -0.07% ). Of course, an acquisition could bring certain benefits. A powerhouse like LVMH might put more dollars in Tiffany's pockets for marketing and additional growth, and it could offer the company wider exposure. If the companies decide to tie the knot, LVMH could expand Tiffany's reach in Europe, for example. Tiffany operates 47 stores in the region, while LVMH operates 1,153.

Still, looking at Tiffany's valuation, earnings, outlook, and presence in the jewelry market, it's clear that LVMH's current offer undervalues the company. At this price, lower than today's share price, potential gains from an acquisition aren't worth the loss of independence. For that kind of trade-off, LVMH would have to sweeten the deal. The level of $140 a share, which the stock did reach last year, is key to further talks, Reuters reported. Less than that is a bargain for LVMH and a loss for Tiffany and its shareholders.