The maker of World of Warcraft has spent the past year investing in content development to position the company for long-term growth. The absence of Destiny, which was cut out of Activision Blizzard's (NASDAQ:ATVI) lineup, is partly to blame for the lack of growth on the top line this year. But recent new releases and new content coming in 2020 are expected to return the company to growth next year.

Activision Blizzard is building momentum as the year comes to a close. The game maker delivered third-quarter earnings results that were well ahead of management's previous expectations. Revenue of $1.282 billion was above the outlook for $1.105 billion. Adjusted earnings were nearly double management's guidance, coming in at $0.38 per share. However, the bottom-line beat was partly due to favorable cost timing. The company plans to reinvest the profits in the fourth quarter on growing the company's audience reach, particularly in the Call of Duty franchise.

What's more, new releases are off to a strong start, and the company has a rich pipeline of new games and content currently in development. Here are a few takeaways from the third-quarter conference call that reveal a company laying the foundation for growth, not just in 2020, but for the next decade. 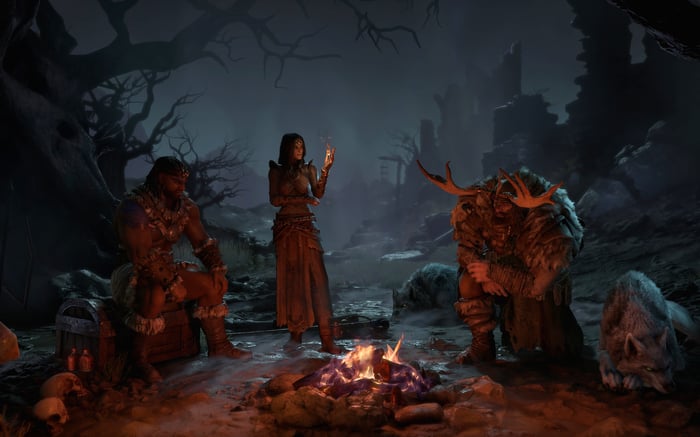 Call of Duty player base triples with mobile release

The third quarter was driven by Call of Duty in-game sales and World of Warcraft Classic. In-game revenue was $709 million, compared to total net bookings in the quarter of $1.214 billion.

Strong momentum has continued into the fourth quarter, with over 100 million downloads of Call of Duty Mobile, which was released at the beginning of October, as well as a strong start for Call of Duty: Modern Warfare, which just launched.

During the third-quarter conference call, President of Activision Robert Kostich said they are seeing broad-based momentum across the Call of Duty franchise: "This is a pretty special time for Call of Duty across mobile, our traditional console and PC business and across the esports. We're seeing significant success and traction on all fronts."

The mobile game has more than tripled the audience for the franchise, which has historically been focused exclusively on console and PC. The company is seeing strong growth "in many geographies," as Kostich explained, especially in India and Brazil.

The growth in Call of Duty's audience couldn't come at a better time for the franchise, with Call of Duty League, a professional esport based on the game, launching next year. The company has learned a lot over the past two years developing the Overwatch League, which saw a 30% year-over-year increase in average minute audience during the second season and attracted several global brands as sponsors.

COO Coddy Johnson said the team behind Call of Duty Mobile is not resting on its laurels but is investing more heading into the fourth quarter to keep the momentum going. During the call, Johnson said, "Our publishing team is capitalizing on this momentum significantly increasing our user acquisition budget to continue to grow the player base."

Johnson explained that, while the extra investment will negatively impact Q4 profitability, it also "sets up healthy contribution for the title in 2020." Johnson added that they have big plans to make sure players stay engaged and spend money on in-app purchases with "a raft of features, content, and events lined up for the future of Call of Duty mobile."

Laying the foundation for the next 10 years

On Nov. 1, at the annual BlizzCon event in Anaheim, Blizzard announced new games and content across its top franchises, including Diablo 4 and Overwatch 2, a new expansion for World of Warcraft, and new content for Hearthstone.

CEO Bobby Kotick has high expectations for the new games: "We expect the innovations on display across World of Warcraft, Hearthstone, Overwatch, and Diablo to inspire Blizzard players and expand Blizzard communities. And we expect Blizzard to deliver the consistent business growth that we know is possible in an industry with so many opportunities."

There was a lot of new content announced at this year's BlizzCon, but there could be a lot more in store, including a wholly new franchise announced in the next few years. During the call, Johnson said, "The team is working on more projects behind the scenes, including new [intellectual property]."

Over the last year, Activision Blizzard has started to invest more aggressively in the mobile game market. We've seen an early result of that effort with Call of Duty Mobile, but one of the company's growth strategies, as Johnson discussed on the call, is "to build on King's leadership position and extend our game console and PC franchises to mobile."

The company has already announced Diablo Immortal for mobile devices. We can't rule out the possibility of Overwatch making a debut on mobile at some point. Other top competitive shooters (Fortnite and PUBG) have already released mobile versions. Activision Blizzard has some of the top games in the industry, so it appears that the company is looking to eventually release mobile versions of some, if not all, of its most popular franchises.

The stock has already started to creep up, climbing 14% in the last six months. Analysts currently expect Activision Blizzard to grow revenue and adjusted earnings by 8.7% and 13.6%, respectively, in 2020.

With recent releases off to a good start and more games and content planned in the next few years, it's becoming more clear that Activision Blizzard is starting to turn a corner.