Please ensure Javascript is enabled for purposes of website accessibility
Free Article Join Over 1 Million Premium Members And Get More In-Depth Stock Guidance and Research
By John Ballard - Nov 8, 2019 at 7:30AM

The annual BlizzCon event in Anaheim has reached a new level of importance for Activision Blizzard ( ATVI 1.27% ), not only for gamers but also for investors. At BlizzCon 2018, Blizzard announced a mobile version based on one of its beloved franchises. Diablo Immortal was met with a negative reaction from hardcore Blizzard fans who were looking for something a little more substantial than a casual mobile title. Investors perceived that the company was losing touch with its player base, and the stock lost a third of its value between November and December last year.

This year's BlizzCon gave fans what they have been craving for a long time. Blizzard not only announced Diablo 4 coming to PC, PlayStation4, and Xbox One, but also Overwatch 2, a sequel to the best-selling team-based multiplayer shooter. Also, and not surprisingly, a new World of Warcraft expansion is scheduled for release next year.

It's a solid reversal from the lack of compelling new announcements a year ago. More importantly, investors can breathe a huge sigh of relief that they likely won't be watching the stock price plunge again this year.

Here is a review of the major announcements from the event, and what it means for investors. 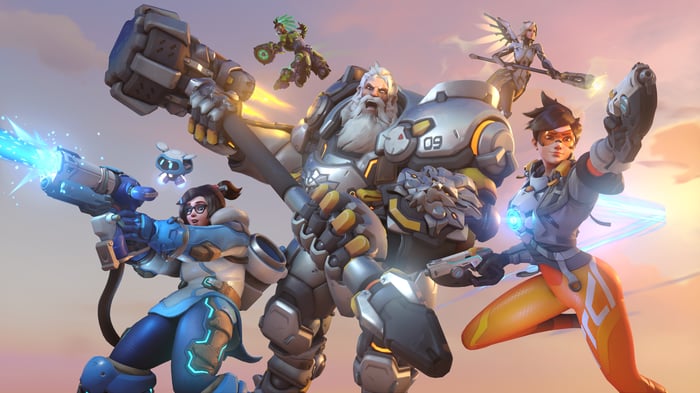 Given the thousands of crushed souls who endured the Diablo Immortal announcement at last year's BlizzCon, Blizzard wasted no time in announcing Diablo 4 within minutes of the opening ceremony on Friday, Nov. 1. It has been seven long years since Diablo 3 was released. The third version of the series became the fastest-selling PC game of all time within 24 hours of launch.

There will clearly be a lot of pent-up demand for Diablo 4. But gamers and investors will have to be patient, because Blizzard gave no timetable for when Diablo 4 or Overwatch 2 will actually be released. Both games are still in development.

World of Warcraft: Shadowlands is expected to be released sometime in 2020, which follows the past cadence for the franchise that typically gets a new expansion every few years. The 15-year-old franchise has experienced a revival over the last year, with World of Warcraft Classic getting positive reviews since its release in August.

The company announced during its second-quarter earnings call that World of Warcraft (WoW) subscribers had increased since mid-May, following the beta release of WoW Classic and the Rise of Azshara content update in June.

Overwatch has emerged as a pillar franchise for the growth of the company, given the substantial investments being made in Overwatch League -- the esport based on the best-selling franchise. So the announcement of a sequel is a big deal.

Information about a possible sequel to Overwatch had been leaked for months. Everyone expected this, but it still left a very positive impression for the future of the franchise.

Overwatch 2 brings to the franchise what players have been asking for: cooperative, non-competitive gameplay that allows the player to experience the story behind the characters. In addition to the competitive game modes from the first title, Overwatch 2 adds new modes that provide a casual, fun experience where players group with others to complete story missions.

It's a nice change of pace for a title that can easily cause players to feel burnout after grinding competitive gameplay for months on end.

The one important thing for investors to know

Blizzard said it is developing Overwatch 2 to be a game you can play "year after year." The story missions are designed to be highly replayable. This suggests that the company may take a page out of the WoW playbook and release new content updates to the game regularly.

It seems that Overwatch 2 is not only highly replayable but could be highly repay-able as well. Overwatch 2's focus on non-competitive game modes should widen the game's audience reach -- one of the company's strategic pillars -- and appeal to those who are not interested in the intensive, competitive gameplay. Obviously, if the game's audience reach expands, that would allow the company to generate more revenue from content updates.

There is a lot of potential for the company to monetize the intellectual property of this franchise across a wide range of entertainment channels, including toys and TV. The story-based gameplay of Overwatch 2 should go a long way to unlocking that potential.

BlizzCon 2019 was a great turnaround for Activision Blizzard after last year's disappointment. Earlier this year, management pledged to double down on its biggest franchises to deliver better returns. Although plans for Diablo 4 and Overwatch 2 have likely been in place well before 2019, the new announcements reflect a company that's very much in growth mode and setting the stage for a comeback in the next few years.