During aviation leasing giant AerCap's (NYSE:AER) third-quarter earnings conference call last week, management shared an interesting statistic that caught my eye. CEO Aengus Kelly noted that the company had realized an 8% gain on its sold aircraft during the quarter, and that this has been a consistent margin over the last 13 to 14 years. This has resulted in an average gain on equity on sold aircraft of 30% over the same period.

The company is able to achieve a 30% return on equity on sold planes because its equity component in aircraft purchases is 25%; AerCap borrows the rest. Kelly provided a simple illustration: "And so when we give you a number, if we say we sell an airplane at an 8% margin and it was on the books for $100 million, that means we sold it at $108 million. However, because the equity component is $25 million, we're levered [borrowed] three to one, so in our $100 million [figure], $25 million is equity."

In other words, the $8 million of gain on sale in such a transaction, divided by $25 million in equity, results in a 32% return on equity.

AerCap has enjoyed success in the secondary market selling planes that are no longer suitable for leasing because it's traditionally pursued extremely high-quality, in-demand assets, with a recent focus on "new-technology" planes that optimize passenger capacity and fuel efficiency. 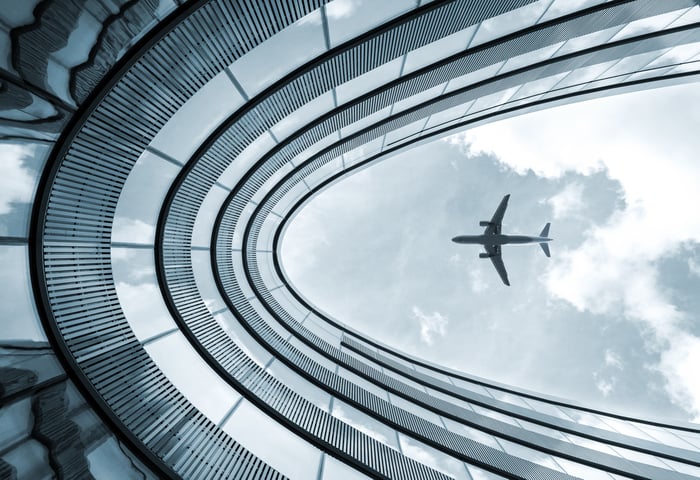 AerCap isn't using the freed-up capital arising from plane sales only for asset purchases. It's proved an avid repurchaser of its own shares, having repurchased $426 million of its common stock in the first three quarters of this year. The company announced a new $200 million share repurchase authorization in its Nov. 8 earnings report. Without much fanfare, AerCap has reduced its diluted shares outstanding by a massive 38% over the last five years.

The high return on equity and reduction in share count aren't coincidental. AerCap's shares have consistently traded at a price-to-book value ratio of less than 1.0 over the last four years, indicating that the common stock is undervalued. Kelly explained during the call that AerCap is essentially conducting long-term arbitrage, or taking advantage of a temporary mispricing of assets.

The aircraft owner-lessor is generating returns of 30% on the equity in its fleet, while buying shares of AerCap's common stock when its price falls below book value per share. AerCap shares currently trade a price-to-book reading of 0.88.

If you follow management's reasoning, a proven 30% return on equity in plane sales implies that AerCap's stock should sell on the open market for at least 1.3 times book value. Thus, a purchase of shares at 12 percentage points below book value (given the current price-to-book ratio) actually equates to 48 percentage points below the level that management believes to be the fair value of the stock. This is essentially the arbitrage transaction the company has been conducting for the last several years.

Of course, the airline industry is cyclical, and as I've recently discussed, persistent fear of a macroeconomic slowdown that could crimp airlines' earnings (and thus growth prospects for aircraft lessors) is responsible for a stubborn market discount on AerCap's shares.

Nonetheless, AerCap is equipped to handle a change in business conditions. Its fleet utilization stands at 99%, and management has traditionally avoided buying overpriced assets or aircraft simply for the sake of building future leasable inventory. The organization is aligned with the specific needs of its customers, as this creates the highest probability of a successful leased life and resale of each asset. Or as Kelly put it -- in starker terms -- during the earnings call: "The key to AerCap's purchasing and portfolio strategy is to buy aircraft that our customers want, not whatever Boeing and Airbus want to sell."

While it may not be immediately visible, AerCap's stock arbitrage strategy will benefit shareholders. A reduced share count translates into higher earnings per share, and theoretically the continual removal of AerCap shares from the market will also juice stock price once wholesale investor demand returns. The "AER" symbol may indeed encounter volatility in a market correction. However, for the risk tolerant, the world's largest lessor of aircraft is an intriguing value play that may grow only more enticing if shares sell off during a market downturn.