You heard me: As growth investments go, it's kind of hard to beat Netflix (NASDAQ:NFLX).

I have a ton of respect for its fellow media powerhouse Walt Disney (NYSE:DIS), and I plan to own both of these stocks for decades to come. But not even the House of Mouse can measure up to Netflix in this particular category. 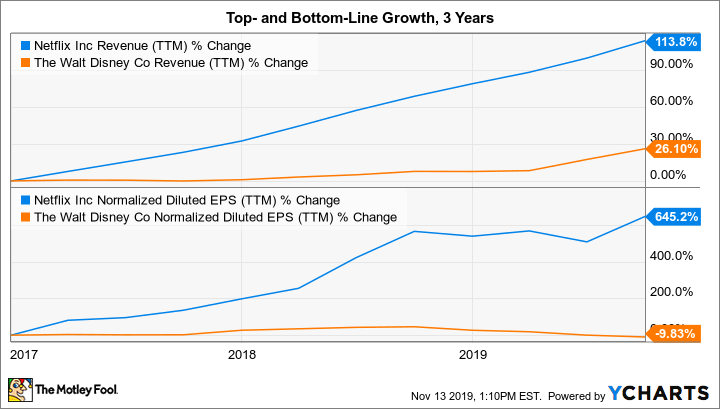 The picture above says a lot more than a thousand words. If I stopped writing right now, you would still walk away knowing that Netflix absolutely crushes Disney in terms of financial growth.

That's not changing anytime soon. Netflix's earnings have grown at an annual clip of 58% over the last 5 years, while Disney trailed far behind at an average growth rate of 16%. Long-term analyst projections call for Netflix to continue crushing it on the bottom line, expanding earnings by an average of 42% over the next half-decade. In Disney's case, Wall Street would settle for a thoroughly forgettable growth rate of roughly 0.4%.

Doing the math on those 5-year growth targets, analysts expect Netflix to grow its earnings by a total of 477%, while Disney should hold almost perfectly still with a total increase of just 2%. I will say that long-term analyst projections aren't terribly reliable, and the real results will probably deviate from the given estimates by a fair amount. Even so, the directional guidance here is both very clear and -- in my opinion -- on target.

This match-up feels particularly useful right now, just a couple of days after the official launch of Disney+. Plenty of headlines have anointed Disney's new video-streaming service as certain death for Netflix, and that hysteria couldn't be more wrong.

I agree that Disney+ will carve out a significant niche of its own as the streaming-video market evolves. Nobody does kid-friendly content quite like Disney, and the studio's access to Marvel and Star Wars action will also help. But that's where Disney+ stops.

Not even Disney itself would trust this service to dominate the streaming sector. The company also holds 100% ownership of Hulu, which is where you'll find Disney-curated content that doesn't fit within the family-friendly confines of Disney+.

Netflix's ambition is broader than that. This company wants to provide high-quality content for nearly every market, niche, and taste you can think of. The most-watched Netflix originals of 2019 include a sci-fi horror movie, a gorgeous nature documentary, a Spanish crime drama, and a "TV-MA"-rated exploration of teenage sexuality in Britain. Dig a little deeper and you'll see Netflix originals in French, Korean, and Norwegian too. Counting only shows where the main language isn't English, the company created about 100 seasons of original content this year.

"While not all projects that we do pursue will work out, our large and growing subscription base helps enable us to try many approaches, while the size of our content budget (~$10 billion on P&L [production and licensing] spend and ~$15 billion in cash content spend in 2019) insulates us from dependency on any single title," Netflix stated in last month's third-quarter report.

Disney+ is a brand-new service, leaning heavily on Disney's decades of high-quality content production. The service launched with a grand total of 12 originals. That's comparable to the amount of original content Netflix premieres every two weeks or so. 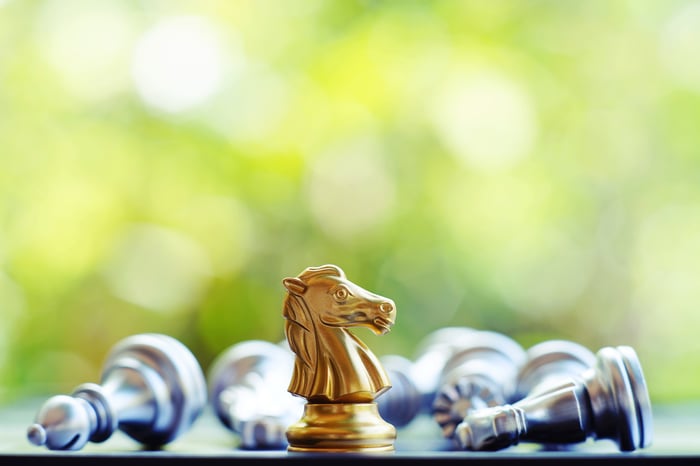 Netflix aims to be a little bit of everything for pretty much everybody. Disney just wants to keep the kids interested. There's just no way Disney+ on its own could ever kill Netflix, and it's still a long shot if you pair it up with Hulu in an all-out assault on the leading video-streaming service.

And we're talking about high-octane growth here. Netflix is pushing the pedal to the metal, and reinvesting most of the cash that this strategy produces into even more content production and global marketing. Disney can't afford to do that, because extreme success on the streaming side of the media market would inevitably cannibalize the company's established operations in the TV and cinema sectors.

I'm happy to own Disney for its incredible stability and willingness to change with the times. It's the kind of stock you can buy once, stick the stubs under your kids' pillows, and allow everybody to sleep soundly until those youngsters retire. But Disney cannot match Netflix's skyrocketing growth ambitions. My own Netflix shares have gained 2,300% in eight years, and I expect that wealth creation to continue.

For further detail on exactly why I see Netflix creating more value over time, please see that three-year growth chart again. It can speak volumes if you're ready to listen.