Livongo Health (NASDAQ:LVGO), a small healthcare technology company that just went public in July, has had a turbulent past couple of months. After losing a significant portion of its market value in September, Livongo ended up staging a comeback recently when it handily beat revenue expectations for its third quarter.

While shares are still down from their earlier post-IPO highs, Livongo is an interesting healthcare stock for a number of reasons. Now that the company has seen an uptick in investor interest following its impressive Q3 results, this is a perfect time to review the company and evaluate whether it's a good buy right now. 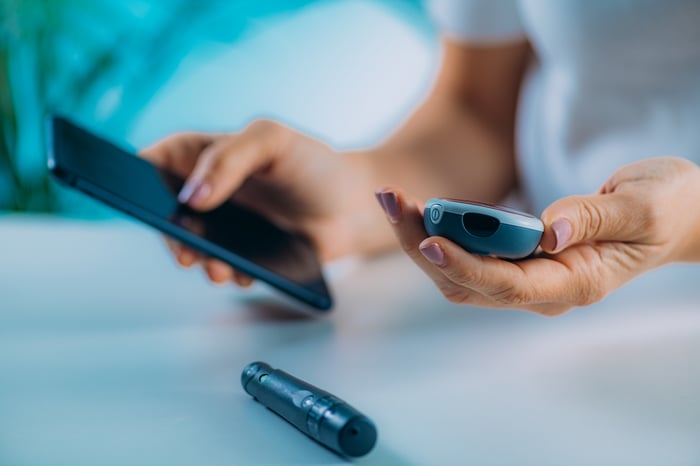 While Livongo focuses on the healthcare market, specifically with patients who have chronic diseases such as diabetes, the Silicon Valley-based company isn't in the business of developing drug candidates. Instead, its sole product is a healthcare platform and software to help patients manage chronic diseases, mainly Type 1 diabetes. The idea is that by analyzing and collecting data, Livongo's real-time AI system can provide insights and reminders that can help patients manage their condition better than if they were just doing it themselves.

While this is a decent idea, Livongo would need to see its patient base grow substantially before such a platform would be profitable, since it operates on a subscription-based business model. To its credit, the company appears to be growing that base successfully. According to the company's recent Q3 financial figures, its patient base grew to 207,815, up by 118% over a one-year time frame. Instead of targeting individual patients, however, Livongo primarily targets institutional clients, such as healthcare providers and organizations. Currently the company boasts 771 clients, which is a 121% increase from the previous year.

Demand has proven to be strong for Livongo's diabetes platform so far, which makes sense when one considers that diabetes is not only one of the fastest-growing chronic conditions in the world but also happens to be one of the most manageable. Around 425 million adults globally have diabetes, a figure that's projected to grow to 629 million in the next 25 years. If this wasn't a compelling enough figure, current estimates predict that the global digital health market, which includes platforms such as Livongo's, is estimated to reach $504.4 billion by 2025, representing a 29% annual growth rate.

The company has also said that if all goes well, it will expand its platform to other chronic conditions, such as prediabetes and hypertension. These particular areas tend to overlap with diabetes, with more than 70% of diabetes patients also suffering from hypertension, so it makes sense for Livongo to expand into these areas.

Diving deeper into the financials

With Livongo's client base growing substantially over the past year, the company has managed to exceed its own revenue expectations for the quarter. Overall revenue reached $46.7 million, a 148% year-over-year increase, with an impressive gross margin of 73.9%. Livongo originally had expected its Q3 revenue to hit $42 million but ended up exceeding its own guidance by an impressive 10%.

However, while the company is growing substantially, it's still operating at a loss. Livongo reported a $19.7 million loss for Q3, which is a 38.7% increase from Q2's $14.2 million loss. Revenues have gone up, but proportionally, losses have grown at a larger rate.

Perhaps the most reassuring metric for an early-stage growth stock like Livongo is its cash balance. The company reported an impressive $349.8 million in cash and cash equivalents, enough to last it at least four years assuming current levels of expenditures.

As mentioned before, Livongo isn't profitable at the moment, and management doesn't expect the business to be profitable until 2021 at the soonest. While its nearly $350 million cash balance is definitely a reassuring sign, two years is a long time in the world of healthcare technology, and a lot can change during this period.

The primary concern for Livongo, however, is that there's plenty of competition in this sector. It includes private companies such as Virta Health, Omada Health, and Glooko. Other noteworthy competitors include Glymetrix, which is developing a game-based digital platform that would incentivize diabetes patients to improve their health.

Also, a number of mobile apps let patients self-manage diabetes. Glooko's mobile app is one of the most notable, coming in at a $59.95-per-year price tag for individuals. Users can choose from a number of free alternatives with in-app purchases as well.

The difference between these services and Livongo's, however, is that Livongo focuses more on institutional clients and employers rather than individual retail users. A recent study backed by both Livongo and Eli Lilly found that employers that included Livongo in their employee health packages were able to save between $20 and $50 per user per month in medical expenses. This cost-savings angle is a major selling point for Livongo as it targets other institutional clients in the future and helps differentiate itself from other diabetes-management platforms.

Overall, Livongo is an interesting company with a strong bullish case for its future. One concern investors might have is that like many other high-growth stocks, Livongo is trading at a pretty pricey valuation: 17.4 times trailing sales, a figure that's fluctuated significantly over the past few days. However, it's a reasonable premium to pay considering the company's triple-digit growth figures.

Overall, Livongo has all the markings of a strong growth stock. Impressive revenue growth, ample cash, and a head start among institutional clients all paint a compelling picture for the company's future. Investors should consider Livongo a good long-term growth stock to add to their portfolios, but they should limit themselves to a small position for now.