Thursday didn't feature any big moves on Wall Street, with major benchmarks remaining little changed at the end of the session. Market participants didn't get a whole lot of guidance on key issues affecting their views, and comments from Fed Chair Jerome Powell seemed to indicate that the current level of economic expansion could stay in place for the foreseeable future. Yet some companies had to deal with unfortunate news that sent their shares lower. Cisco Systems (NASDAQ:CSCO), Weibo (NASDAQ:WB), and Aurora Cannabis (NASDAQ:ACB) were among the worst performers. Here's why they did so poorly.

Shares of Cisco Systems fell 7% after the company reported downbeat fiscal first-quarter financial results. The networking giant said that revenue managed to climb 2% from year-ago levels, with a 12% rise in adjusted earnings per share. Yet guidance for the coming quarter was less favorable, including projected top-line declines of 3% to 5%. Some of the uncertainties about the likelihood of sustained economic growth in the future are starting to make Cisco's customers seem to hesitate before making big purchases. Without a nice bump from an external event like a resolution to trade disputes with China or an economic recovery in Europe, it could take a while for Cisco to bounce back fully. 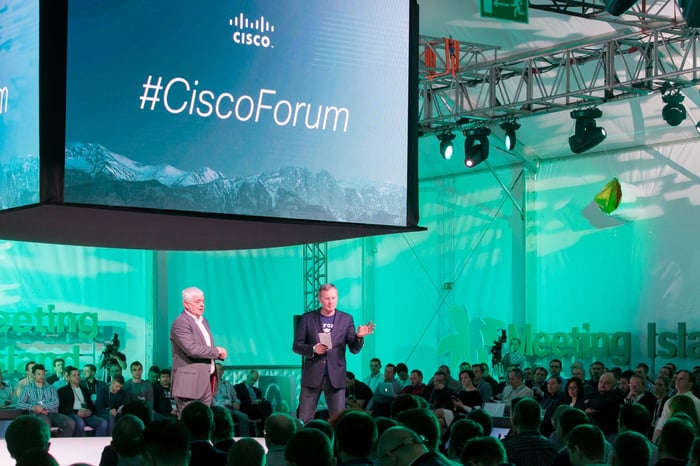 Social media company Weibo saw its stock drop 18% following its release of third-quarter financial results. Weibo posted modest growth for the period, including a 2% rise in revenue and an adjusted net income boost of 2.5% year over year. Monthly active users moved higher by more than 50 million to a total of almost 500 million users. Yet as with Cisco, Weibo wasn't able to reassure its shareholders about the company's near-term future, giving guidance for fourth-quarter revenue growth of roughly 1.5%. It's always tough when tech companies stop growing as quickly as they did in the past, and Weibo has to find a way to make a transition into a more mature company in order to regain investors' trust.

Will Aurora Cannabis suffer the same fate as other pot stocks?

Finally, shares of Aurora Cannabis sank 7%. Marijuana stock investors were disappointed by poor results from Aurora's key competitor, Canopy Growth, which wasn't able to satisfy shareholders with its growth rates. Not all of what Canopy dealt with will hurt Aurora, but comments about sluggish demand in the Canadian recreational market and logistical concerns surrounding provincial purchase activity and retail store openings could negatively affect the entire industry. Aurora will release its own financial results Thursday afternoon, and it'll be interesting to see how many similarities there are between the two cannabis companies' reports.