Shares of Navigator Holdings (NYSE:NVGS) and Teekay Tankers (NYSE:TNK) each gained more than 10% on Thursday, and holding company Teekay (NYSE:TK) was up more than 5% as strong demand from the energy sector lifted shipping companies as a group.

Navigator Holdings, an owner and operator of a fleet of liquefied gas carriers as well as ships that transport ethylene, ethane, and ammonia, reported a third-quarter loss of $0.05 per share on revenue of $75.62 million, beating analyst estimates for a $0.07 loss on $60 million in sales.

The company credited tensions in the Middle East and more competitive U.S. butane pricing for creating new demand for U.S. gases from India, and increasing business with China. "Geopolitical tension in the Middle East resulted in the introduction of substantial war risk premiums on shipping through the Straits of Hormuz, which made spot movements of LPG and petrochemical cargoes less economical," Navigator management said in a statement announcing results. 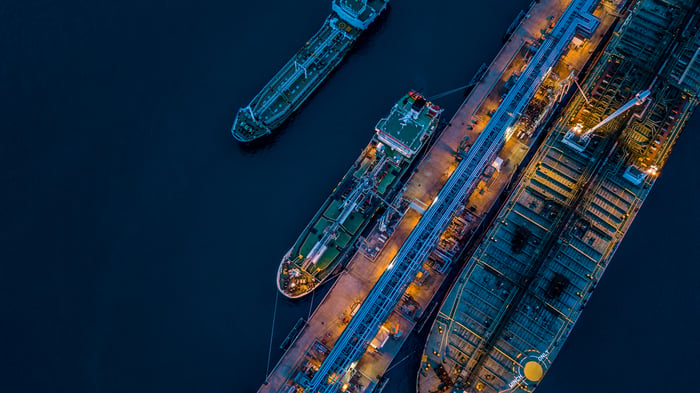 Navigator specializes in so-called "handysized" vessels, smaller transport ships that are able to navigate into areas where larger, deep-ocean vessels cannot and cater to secondary markets that don't have the demand for a large shipload. The company said it signed contracts with seven new clients during the third quarter, including some in China and some in Africa.

Teekay Tankers, meanwhile, reported a third-quarter loss of $0.08 per share, $0.03 better than estimates, and investors cheered the company's commentary about strengthening markets. Over the past month, the U.S. Treasury Department has been pressuring a large Chinese tanker company to wind down operations with Iran or face sanctions, causing shipping rates to rise as oil companies scramble for alternative transportation.

CEO Kevin Mackay in a statement said that although tanker rates declined in the third quarter, "mainly due to normal seasonality," the fourth quarter is looking up.

"A series of market events in late September and into October 2019 drove rates to the highest levels since the peak of the super cycle in 2008," Mackay said. "Looking ahead, as the strong underlying supply and demand fundamentals persist, we continue to have a positive view of the tanker market into the winter months and 2020."

He said that Teekay Tankers is now able to secure tanker rates 133% and 105% higher than what was earned in the third quarter for the two primary vessel sizes it operates.

Teekay, a holding company that owns major stakes in both Teekay Tankers and Teekay LNG (NYSE:TGP), climbed on Thursday thanks to the success of its subsidiaries. Teekay LNG shares were up more than 13% on the day after that company beat earnings estimates and said it intends to increase its cash distribution to shareholders due to the forecasted strength of its liquid natural gas transport business heading into 2020.

Tanker companies including Teekay and Navigator tend to float or sink along with the health of the energy sector as well as the price of the commodities they support. All of these companies have been sailing through choppy waters in recent years, but the commentary coming out of this latest round of earnings presentations is full of optimism, and investors are reacting accordingly.

These businesses still carry a load of debt and are counting on strong demand and high tanker rates to help pay down liabilities and fortify their balance sheets. Investors should be cognizant that should the market turn and demand evaporate, the stocks are likely to move very rapidly in the opposite direction. But for now, conditions are favorable, and it is full steam ahead for these shipping stocks.