Please ensure Javascript is enabled for purposes of website accessibility
Free Article Join Over 1 Million Premium Members And Get More In-Depth Stock Guidance and Research
By Keith Speights - Nov 15, 2019 at 6:00AM

The Canadian cannabis producer appears to have pulled a rabbit out of the hat.

Two words sum up Aurora Cannabis' ( ACB 2.16% ) fiscal 2020 first-quarter results: dumpster fire. Aurora's share price sank during the day on Thursday even before the company reported its Q1 results after the market closed due to Canopy Growth's horrible quarterly update announced before the market opened. But as it turned out, that sell-off during normal trading hours wasn't pessimistic enough.

However, in addition to the horribly rotten results, Aurora announced something else Thursday evening that you shouldn't overlook. And it's arguably a bigger story than the Q1 dumpster fire. 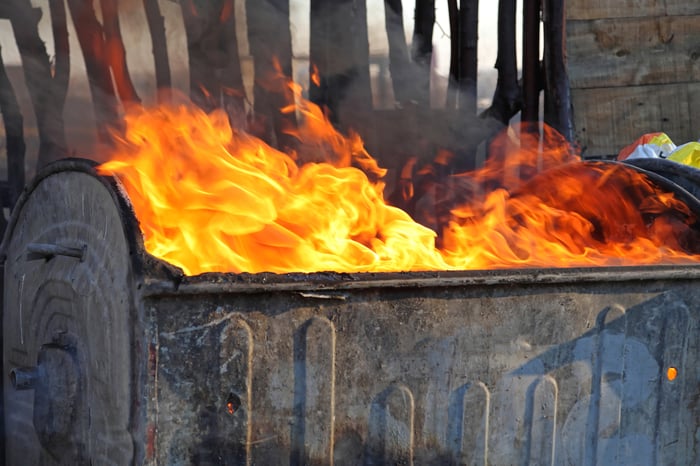 Aurora's press release announcing its Q1 results on Thursday was preceded by another press release about a "temporarily amended early conversion privilege for its 2020 convertible debentures." I know that's a mouthful, so let's unpack exactly what's happening.

The company has fueled a significant portion of its acquisitions spree and massive production capacity expansion through issuing convertible debentures. These debentures are notes that pay interest like a bond but can be converted at a specified time and price to shares.

I've written in the past about Aurora's "ticking time bomb" -- 230 million Canadian dollars' worth of convertible debentures that reach maturity in March 2020. The conversion price for these debentures is CA$13.05. That's way higher than Aurora's share price even before the big sell-off this week. It seemed a virtual certainty that the company would have to dilute its stock more to pay off the holders of these debentures.

However, Aurora appears to have essentially pulled a rabbit out of the hat. The company is offering a special deal that allows investors to convert their debentures to stock at a share price that's a 6% discount to the five-day volume-weighted average trading price of the stock. In addition, the holders of the debentures still get to receive all accrued and unpaid interest from the last interest payment on June 30, 2019, plus all future unpaid interest between Nov. 25, 2019, and the March 9, 2020, maturity date of the debentures.

Aurora has been busy selling this deal as well. The company stated that it has lined up commitments from investors who together own around CA$155 million of the debentures to convert those debentures under the special terms.

So what does all of this mean? Aurora isn't going to have to come up with CA$230 million in cash to pay off holders of the debentures. That's very good news. Sure, the company might have to pony up some cash to cover any debentures that aren't converted. But it won't be nearly as bad as it could have been.

About the dumpster fire

This avoidance of one big problem, however, doesn't make Aurora's Q1 results look any better. It's hard to know where to even begin in describing just how bad the quarter was.

The only good news on the revenue front was that Aurora reported higher net sales for medical cannabis of $30.5 million. But those sales increased only 3% from the previous quarter.

Aurora posted positive net income of CA$10.7 million -- but don't get too excited. This figure included an unrealized gain on derivative liability of CA$143.8 million. This unrealized gain resulted from Aurora's share price dropping during the quarter, thereby reducing its liability related to 2024 convertible senior notes. Any paper profit that stemmed from a declining share price isn't something to crow about.

The company's adjusted earnings before interest, taxes, depreciation, and amortization (EBITDA) is more instructive. Aurora reported an adjusted EBITDA loss in the first quarter of CA$39.7 million, compared to an adjusted EBITDA loss of CA$26.6 million in the previous quarter. It wasn't all that long ago that Aurora executives were predicting positive adjusted EBITDA in the near future, but now its results are headed in the wrong direction.

What went wrong for Aurora in its fiscal first quarter? Like Canopy Growth and others, the company pointed to the inadequate number of retail cannabis stores in Canada. As for the big decline in wholesale cannabis revenue, Aurora said that the "Canadian wholesale market is rapidly evolving." The company's deteriorating EBITDA stemmed from the revenue shortfall combined with significant increases in spending.

First, the bad news: It's not looking like Aurora's path to profitability will be a smooth one. The company noted that its continued global investments "may result in near-term challenges to achieving positive adjusted EBITDA."

However, Aurora plans to cut its capital expenditures. It's halting construction on its Aurora Nordic 2 facility in Denmark. It's pushing back most of the remaining construction work on the Aurora Sun facility. These two decisions together will save around CA$190 million.

There is some good news, though. The retail environment in Canada is improving. Aurora expects to be a winner in the Cannabis 2.0 cannabis derivatives market. The company also said that it's "evaluating a number of potential accretive alternatives with a focus on adding operating cash flows" for "expanding its operating footprint in the United States."

Canadian marijuana stocks are going through an especially rough period right now. Aurora Cannabis is clearly no exception. Its Q1 results were without exaggeration a dumpster fire. But don't assume that the future will be as bad as the recent past.