Grubhub's (NYSE:GRUB) shares took a nosedive after the company released its third-quarter earnings report on October 28th. It isn't difficult to understand why investors were less than impressed with Grubhub's performance, either. Despite the company adding 1 million active customers and 15,000 restaurants to its platform, as well as growing its active daily grubs, gross food sales, and active diners by 10%, 15%, and 29%, respectively, Grubhub's top line fell far short of the consensus Wall Street analyst estimates.

Grubhub's net income of $1 million (or $0.01 per share) wasn't particularly stellar, either, and perhaps the scariest metric of all was the company's revenue guidance for the fourth quarter, the midpoint of which (once again) falls short of analyst estimates. Despite its stock dropping about 40% since its earnings release, though, Grubhub still trades at 164 times forward earnings. But is the company worth the trouble, or should investors look elsewhere? 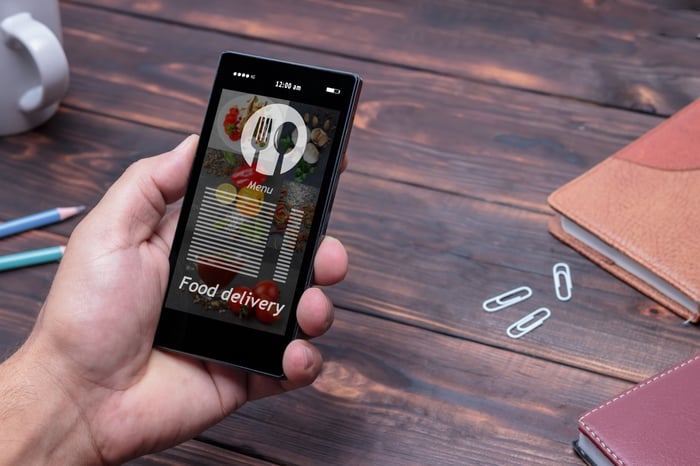 Competition is eating away at Grubhub's business

While Grubhub is one of the oldest players in this relatively new industry, it is worth considering whether the company benefits from a competitive advantage. Any business that generates a profitable service will attract a lot of competitors over time, and the only way for a company to stay on top is to have an edge over the competition. Unfortunately for the food delivery platform, competition from rivals seems to be having a noticeably negative impact on the company. There is no shortage of similar services: Postmates, DoorDash, and of course Uber's own UberEats. According to CEO of Grubhub Matt Maloney: "To be clear, a very small fraction of our diners use other platforms in general and the newer diners use multiple with a much greater degree of frequency. The older cohorts are definitely more stable, but we think that small parts of those cohorts are testing the waters at different points and that's why closing the restaurant gap is so important."

In other words, Grubhub benefits from some brand loyalty, but mostly with its oldest clients, some of whom are also looking to diversify. Newer clients, on the other hand, aren't likely to be faithful to one platform at all, a phenomenon Maloney referred to as "the promiscuity of cohorts." Here's what this means for Grubhub moving forward: The company will likely struggle to attract faithful new clients as opposed to those who simply order from whatever app happens to be convenient at a particular time, unless of course the company finds ways to provide incentive to its clients to stick with its own food delivery app.

Here's the good news for Grubhub: There is still much room for growth in the takeout market, which, according to the company itself, generates a whopping $200 billion annually. Grubhub is focusing its efforts in two key areas to get ahead of the competition. First, the company is looking to "close the gap" between its restaurant inventory (the number and variety of restaurants on its platform) and that of other food delivery apps. Obviously, diners care about ordering from the restaurants of their choice, and whichever platform offers the most variety likely has an advantage, all other things remaining equal. Second, Grubhub is trying to promote customer loyalty by providing lower overall costs than those of its peers. And in the same vein, the company is seeking to develop a lasting relationship with restaurants on its platform as well.

Whether Grubhub's efforts will pay off is, at this point, anyone's guess, but given the company's recent struggles and its high price-to-earnings ratio, it may be wise to take a wait-and-see approach. After all, there are lots of tech stocks to turn to.