It was a fairly good Monday for many stocks, with indexes generally headed in the right direction (i.e., up). Even some of the more sluggish movers of late managed to rise in price.

I'm here to discuss two that didn't. Both declined, at least partially due to fresh news coming from their press rooms. Without further ado, let's step into the ring for a closer look at the action. 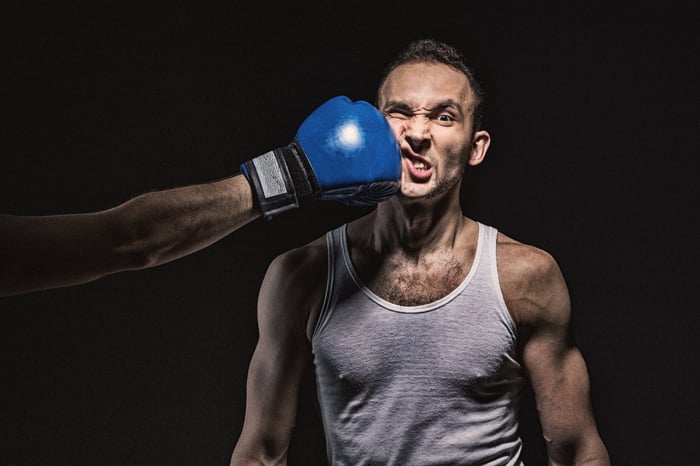 Although Scotts Miracle-Gro (NYSE:SMG) isn't exclusively in the business of cannabis, many investors nevertheless consider it as belonging to the small universe of marijuana stocks.

That's not a great club to belong to these days, as marijuana stocks have really taken a hit this year on both poor company-specific fundamentals and industrywide challenges. Perhaps this disfavor with the asset class is why the stock took a 4% hit to its price on Monday.

No doubt compounding this is Scotts Miracle-Gro's recently reported Q4 of fiscal 2019 results. Revenue for the period exceeded analyst estimates, coming in 15% higher on a year-over-year basis at nearly $498 million, versus the average estimate, which was nearly 11% lower.

But net loss was deeper than anticipated. This landed at $50.7 million, or $0.91 per share, against the expected earnings per share of $0.87.

Interestingly, it's the marijuana wing of Scotts Miracle-Gro that's showing the most miraculous growth. For the entirety of fiscal 2019, the Hawthorne Gardening unit, which sells products used mainly or exclusively in the cultivation of cannabis, nearly doubled its sales.

That was vastly better than the core U.S. consumer business (up only 8%) and the small catchall "other" category (down 2%). So perhaps, having digested these results, investors are growing (ha ha) concerned that the company has only one good source of growth.

To an extent, I think that's valid. Hawthorne will likely continue to improve its sales figures, although it's conceivable that as a maturing business it won't come close to posting another double in future fiscal years. After all, the marijuana industry is developing more slowly than anticipated, with legalization proceeding at a snail's pace overall.

All that said, Scotts Miracle-Gro shares aren't very expensive on a valuation basis, and despite those fits and starts, the cannabis industry is here to stay and will improve as the legal environment continues to thaw. I think investors should consider buying this stock despite the headwinds.

There's nothing like a worsening scandal to leech a stock price. So it is with once-high-flying athletic wear purveyor Under Armour (NYSE:UA), which saw its shares dip by nearly 2% on Monday, thanks to continued fallout from a controversy.

Earlier this month, in the wake of the company's latest quarterly results release, it was revealed that Under Armour was under federal investigation for its accounting practices.

And late last week, a Wall Street Journal article said that unnamed "former executives" at the company used possibly fraudulent means to extend a long string of quarterly sales growth results of 20% and more. Understandably, Under Armour is now being targeted by irate investors and other concerned parties in a class action lawsuit.

No matter how well a company is doing, these sorts of underhanded actions (if proven to be accurately reported) are indicative of desperate management that has misplaced its priorities. Such a business probably can't be trusted to report accurate numbers, and we should never buy anything on data that is less than precise and true.

Under Armour might, just might, get a pass if its business was going gangbusters. That's really no longer the case, though. Other companies, such as longtime powerhouse rival Nike, have successfully pushed into segments such as athleisurewear. No wonder Under Armour recently made a big cut to its full-year revenue guidance.

The combination of lower-than-expected growth and legal controversy is enough for me to stay away from this stock. Plus, even with this latest pullback, it's still quite pricey on anticipated profitability.