Please ensure Javascript is enabled for purposes of website accessibility
Free Article Join Over 1 Million Premium Members And Get More In-Depth Stock Guidance and Research
By Mark Prvulovic - Nov 18, 2019 at 11:21AM

Is the optimism surrounding this insulin pump maker justified?

One promising area for biotech investors looking for growth is the diabetes market. More than 425 million adults around the world have been diagnosed with the condition, a figure that will only continue to grow over the coming years.

Because diabetes has a relatively low mortality rate and an increasing patient population, many biotech stocks that focus on this market have quickly become compelling investments. One of these is Tandem Diabetes Care ( TNDM -1.63% ), a leading manufacturer of insulin pumps used by patients with type 1 diabetes to manage their blood sugar levels. Shares of Tandem have almost doubled since the start of the year as sales continue to skyrocket.

Let's take a look at some reasons Wall Street considers Tandem Diabetes a buy and whether these reasons are justified. 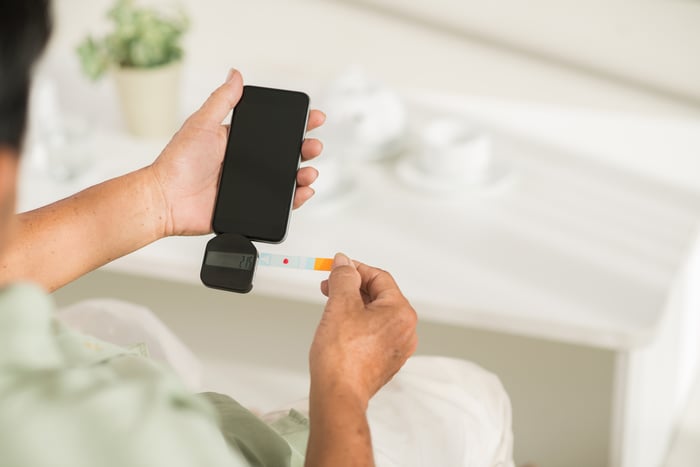 The market for insulin pumps

Type 1 diabetes patients require insulin on a consistent basis, usually administered either by multiple daily injections (the most common method) or by continuous subcutaneous insulin infusions, also referred to as just insulin pump therapy. This second option, which is becoming increasingly popular among type 1 diabetes patients, relies on a portable pump that automatically delivers insulin in a way that mimics the bodily process of a nondiabetic person.

Although only a portion of type 1 diabetes patients use insulin pumps, not needing to take multiple daily injections is a major convenience factor that will likely convince many to give insulin pumps a try. At the same time, the fact that most patients aren't using insulin pumps yet means there's plenty of room for the limited number of insulin pump manufacturers, such as Tandem Diabetes, to grow significantly.

Tandem's sales really started to take off after it received approval from the U.S. Food and Drug Administration to use its latest insulin pump, t:slim X2, alongside the Basal-IQ glucose monitor from DexCom. This combination almost completely automates the insulin dosing process for patients, which is a significant selling point over other competitors that haven't integrated glucose monitors yet.

Specifically, the FDA ended up classifying the t:slim X2 as an ACE pump (alternative controller enabled infusion pump), a designation that allows integration with other externally produced components. Since this approval, sales of Tandem's insulin pumps have skyrocketed. In its most recent Q3 financial results, the company saw insulin pump shipments surge by 105% worldwide, growing from 8,434 in Q3 2018 to an impressive 17,893 pumps in Q3 2019. At the same time, Tandem's margins have seen a significant improvement, rising from negative 34% to negative 6% since last year. The company currently estimates that its 2019 sales will come in at $365 million, compared to the $89.8 million seen back in 2018 and the $44.1 million of 2017.

Tandem experienced a little bit of a setback recently when the FDA reported the death of a patient who was using the company's t:slim X2 pump in October. More specifically, the coroner found that the patient's blood sugar was extremely low at the time of death. While shares of Tandem slid in light of this news, the company provided an update to the case, saying that the death wasn't caused by a pump malfunction.

Considering the automated nature of these insulin pumps, patients trust that they will operate perfectly, as a malfunction or outright failure in insulin dosing can easily lead to hypoglycemia and other emergency conditions such as diabetic ketoacidosis. While why exactly the man died remains a mystery, especially since privacy reasons prevent Tandem from clarifying the cause further, the most important thing for investors to know was that the t:slim X2 pump wasn't the cause.

"While this event is certainly tragic, unfortunately some patients experience such issues and ultimately expire while on insulin pumps," said Piper Jaffray analyst J.P. McKim in a research note following this news.

Looking at the competition

While Roche and Johnson & Johnson used to be competitors in the insulin pump market, both companies sold their pump businesses in 2016 and 2017. This leaves only a couple of major players, one of the most notable being Tandem's rival insulin pump manufacturer Insulet ( PODD -2.51% ).

A comparatively positioned and similarly sized competitor to Tandem, Insulet has also seen strong sales growth over the past year. Revenue has gone up by 27% in comparison to the previous year, according to its third-quarter results, and its omnipod insulin pump has also received an ACE designation from FDA to start incorporating glucose monitors. While Insulet's new glucose-monitoring insulin pumps won't be ready until sometime in 2020, Tandem will have to prepare for a new competing product that might chip away at its market share.

However, considering the sheer size of the type 1 diabetes population, the number of potential insulin pump users, and the relative lack of competition beyond a handful of companies, there's enough room in this market for both companies to grow without stifling each other too much.

The biggest concern insulin pump makers like Tandem Diabetes have to worry about is the prospect of a potential type 1 diabetes drug. While there's no miracle cure on the horizon as of yet, there are some treatments that help slow down the onset of the disease in patients who are at high risk of becoming diabetic.

Most notable is Provention Bio's Teplizumab. This drug candidate, which is specifically designed for type 1 diabetes patients, is currently in a phase 3 clinical trial that has shown promising results so far. The drug has shown to be able to delay or even prevent the eventual onset of type 1 diabetes in patients considered to be at high risk of developing the condition.

However, Teplizumab is a preventative drug at its core and doesn't target patients who already have full-blown diabetes, meaning most of the current diabetic market won't be eligible for the treatment. At the same time, even if all goes well with the FDA, Teplizumab likely won't be available until 2022 at the earliest, when its phase 3 trial concludes. That gives insulin pump makers plenty of time to continue growing with little concern.

Tandem Diabetes has seen stellar revenue growth over the past year and shows no signs of slowing down. With just a handful of competitors in a rapidly growing market, the company is an extremely compelling growth stock at this moment.

While future diabetes drugs such as Teplizumab could end up hurting Tandem's growth figures, such a situation is still fairly far in the future. For the next 12 to 24 months, there's nothing stopping Tandem from continuing its growing spree. For those comfortable with investing in a small, high-growth, high-risk biotech stock, Tandem Diabetes is an excellent addition to your portfolio. Just don't put all your eggs in this one basket, and make sure Tandem is just one part in a larger, diversified portfolio.