Mike Sievert cannot replace John Legere as T-Mobile (NASDAQ:TMUS) CEO. He will fill the position, and may even do a good job, but he's not going to be able to step into the space left empty by his predecessor next spring.

Legere used his brash personality to will T-Mobile to success when he took over the CEO role in 2012. By being a mix of Don King, Howard Stern, and Vince McMahon, he turned the No. 4 wireless carrier into a major player that will nearly equal AT&T (NYSE:T) and Verizon (NYSE:VZ) in subscribers once its merger with Sprint (NYSE:S) is completed.

Legere delighted in confounding his rivals by undermining his own industry. He forced the end of billing for overages, deceptive pricing, and wireless data limits. He created the Un-Carrier strategy that made T-Mobile a viable player, and it's hard to think that that would have worked without his brazen taunting of company rivals. 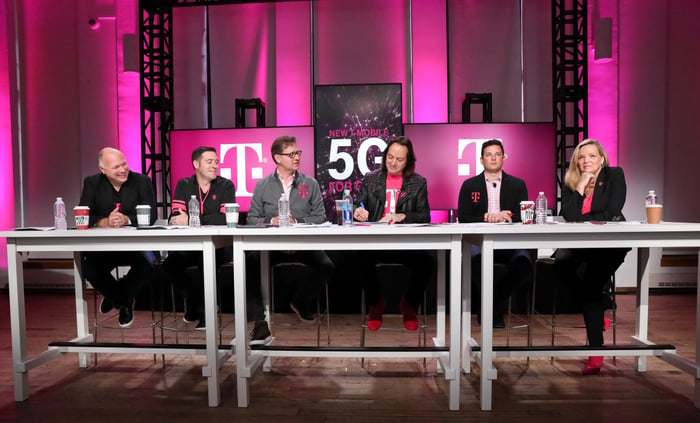 Where is T-Mobile now?

T-Mobile has federal approval for its merger with Sprint, but it needs to fend off a lawsuit from multiple states seeking to stop the deal. Ultimately, the merger appears likely to happen, probably before Leger steps down in April 2020. That will leave Sievert in charge of a company that's roughly the size of AT&T and Verizon, but with significant challenges to overcome.

After the deal closes, T-Mobile will remain the No. 3 wireless carrier, but all three companies will be more or less the same size by subscriber count. Sievert will have to deal with his subscribers being split between two separate networks. He will also have to figure out whether the Sprint brand will be phased out and work to quickly build out T-Mobile's 5G network.

Sievert has been Legere's second-in-command and has been at the forefront of some press conferences. In those rare appearances he has not been shy, but he has also not shown his boss's showmanship or willingness to go after AT&T and Verizon. That said, Legere does seem to approve of his replacement based on his remarks in a press release.

"Mike is well prepared to lead T-Mobile into the future. He has a deep understanding of where T-Mobile has been and where it needs to go to remain the most innovative company in the industry," he said. "I am extremely proud of the culture and enthusiasm we have built around challenging the status quo and our ongoing commitment to putting customers first."

Is Sievert the right guy?

Legere built T-Mobile, at least partly, by the force of his personality. Those talents were necessary to convince consumers to give the company a chance when AT&T and Verizon had stronger brands. It's possible that the company no longer needs that sort of leader.

Sievert may not be the carnival barker/fight promoter that Legere has been, and he may not get attention for mocking his rivals and tilting at windmills. That does not mean he won't be a good leader, though, and the incoming CEO seems to understand his role.

"The Un-carrier culture, which all our employees live every day, will not change," Sievert said in the press release. "T-Mobile is not just about one individual. ... Going forward, my mission is to build on T-Mobile's industry-leading reputation for empowering employees to deliver an outstanding customer experience and to position T-Mobile not only as the leading mobile carrier but as one of the most admired companies in America."

Those are confident words from a man who seems to understand why Legere succeeded. He may be able to take the functional part -- the customer-first, industry-busting ethos -- and execute without being the force of personality Legere has been. That may be enough for T-Mobile as it enters a new era as an equal to AT&T and Verizon rather than an underdog.