More than a decade removed from the global financial crisis, many investors have avoided the housing sector, fearful that history could repeat itself. However, the industry has recovered well and is beginning to look attractive. The homebuilding sector has been on a tear this year, with the S&P Homebuilder ETF (NYSEMKT:XHB) up more than 40%. Investors looking to take advantage of this opportunity should take a look at TRI Pointe Group (NYSE:TPH).

TRI Pointe is an amalgamation of regional builders. Through these regional builders, TRI Pointe is exposed to many of the hottest housing markets in the U.S., including Southern California, the Puget Sound region, Texas, Colorado, and the Middle Atlantic. TRI Pointe is attractive because of the homebuilding sector's fundamentals, its strategy of diversifying into more undervalued markets, and the company's improving margins due to operating leverage and higher volumes. 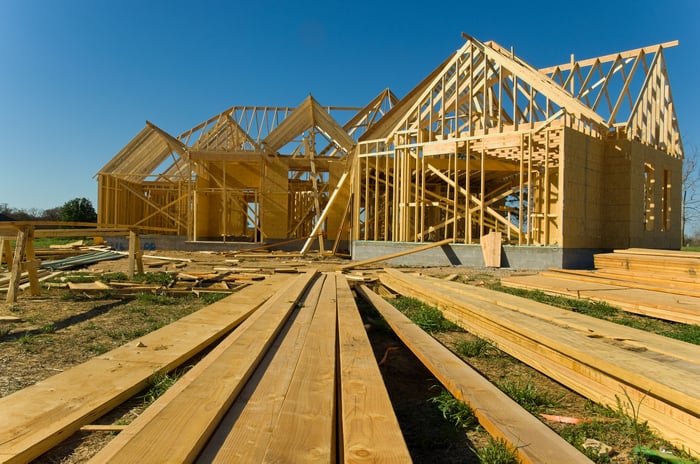 Why do homebuilders look attractive? Simply put, there is a massive supply demand imbalance caused by chronic underbuilding in the decade following the Great Recession.

To get an idea of how much the U.S. has underbuilt, consider that housing starts averaged about 1.5 million units per year until the bubble years of 2003 to 2006. Starting in 2007, homebuilders became extremely cautious, underbuilding as a result. Despite an increase in the population since 2007, housing starts have averaged under 1 million units per year over the past decade. Even the most recent numbers are well below historical averages going back to the 1950s.

Why are builders so cautious? The most obvious fear is that homebuilders will be stuck with inventory that they cannot sell, but there are other issues, specifically the lack of cheap land and a shortage of skilled labor. Apartment construction has also been in favor because the Millennial generation has been more apt to eschew the white picket fence for more urban, walkable neighborhoods. That appears to be changing, however.

As Millennials are starting families, they are finding themselves attracted to the same things their parents liked: a single family residence with a yard, good schools and a neighborhood feel. There is a complete lack of starter homes in many markets, and builders are now beginning to focus on that sector. At the same time, falling interest rates and rising wages provide a solid foundation for growth.

TRI Pointe has exposure to the hottest markets and is diversifying

Historically, TRI Pointe has been in the right markets-the hot West Coast and Mountain states. These areas have seen bidding wars, thin inventory, and massive demand for housing over the past 7 years as the local economies have boomed. That said, home price appreciation has oustripped income growth, and prices have started cooling. The FHFA House Price Index for the Los Angeles, San Diego, Seattle, and San Francisco metropolitan statistical areas have all reported low single-digit annual growth rates. With the recent decline in interest rates, home price appreciation might return as those markets still have profound supply shortages. Even if home price appreciation stalls, TRI-Pointe will still benefit from strong demand in these markets, especially since they are serving the entry-level homebuyer, and starter homes are in the most demand.

Recent expansion into the Southeast and Mid-Atlantic (Charlotte, Raleigh) enables TRI Pointe to rely less on overheated markets and gain exposure to places where home price appreciation is in the high single digits. This expansion will have a couple benefits-first it reduces their risk via diversification, and second, it increase volumes, which is the key to higher operating margins.

TRI Pointe is working to lower its average selling prices by building higher density projects with smaller floor plans. Their current average selling price is $629,000, which is about double that of entry-level builders with a more geographically diverse footprint. Local governments are concerned about a lack of housing, and higher density homes are seen as a solution. Finally, higher density projects will mean lower average costs, which will allow the company to maintain its margins despite lower price points.

TRI Pointe Group's fundamentals are strong as well-they recently reported third quarter earnings of 44 cents a share, handily beating the Street estimate of 36 cents a share. While revenue growth was more or less flat, earnings were driven more by increased margins instead of increases in average selling prices and deliveries. Order growth and backlog were strong however, which means a solid pipeline going forward.

TRI Pointe's earnings multiple is quite attractive as well, trading at 11 times 2019 earnings estimates. Homebuilders tend to be extremely cyclical, and will trade at high multiples (say above 20) during housing downturns, and at single digit P/Es during booms. The homebuilding sector is emerging from a decade-long downturn and is priced at cycle peak P/E ratios despite housing starts that are 16% below historical averages and 40% below typical peak levels. This cycle has a long way to run, and the pieces are finally coming together for the homebuilding sector as a whole. TRI Pointe is attractively positioned and should be considered for anyone looking to gain exposure to the homebuilding sector.