Please ensure Javascript is enabled for purposes of website accessibility
Free Article Join Over 1 Million Premium Members And Get More In-Depth Stock Guidance and Research
By Austin Hackenberg - Nov 19, 2019 at 6:36AM

The payouts just keep on rising.

If you are a buy and hold investor, you probably enjoy having stocks in your portfolio that generate dividends. But as you probably already know, not every dividend stock is equal. That's why you need a dividend stock with a history of paying a stable and growing dividend.

With a long track record of dividend growth and a recent uptick in revenue growth, Lockheed Martin has become one of the best dividend stocks on the market. 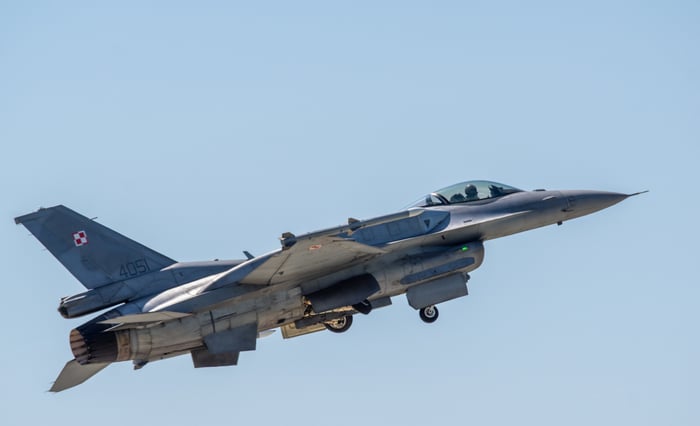 Since November of 2002, Lockheed Martin has increased its dividend payout each year. Sometimes the increase was as small as $0.01, but an increase is an increase. Over the years, the continual increase has really bumped up the yearly dividend.

Over the last year, Lockheed Martin paid out $8.80 a share in dividends. With a share price of around $370, the current dividend yield sits around 2.3%. This marks a yield that is almost at a one year low for the stock and just 65 basis points higher than a 2-year Treasury Bill. However, the share price is near a 5 year high which contributes to this low dividend yield.

But here's the thing -- while Lockheed Martin's dividend yield may be near yearly lows, its 5-year average dividend growth rate is still going strong. Over the past 5 years, Lockheed Martin has increased its yearly dividend by an average of 11.2%. If you take a look back over the last 10 years the yearly growth rate is even higher at 16.2%!

Looking at the Aerospace industry as a whole, only three other public companies have higher dividend growth rates over the last 5 years: Airbus SE ( EADSY 2.69% ) with 20.2%, General Dynamics ( GD -0.12% ) with 14.9%, and Northrop Grumman ( NOC -0.35% ) with 14.1%. And if market capitalization is taken into account, only Airbus has a similar market cap and a higher dividend growth rate.

How is this dividend growth possible?

Most of Lockheed's revenue comes from government defense contracts. In fact, in 2017 almost 70% of revenue came from the United States government.

Government contracts have also helped propel the company to an average revenue growth rate of just under 10% over the last three years. Lockheed Martin will be able to continue this aggressive revenue growth rate given that the value of backlogged contracts (mainly government) has risen to $135.5 billion in the last year. This is an increase of 23.7% over the reported backlog of $105 billion in 2017.

At the end of October, the Pentagon and Lockheed Martin announced a deal for the delivery of 478 F-35 fighter jets with a total contract value of $34 billion. The total value of this deal is equal to about 65% of the total revenue Lockheed reported in its 2018 fiscal year. This deal should be reflected in the total backlog in Lockheed Martin's upcoming 2019 annual report.

There is also the fact that more and more government money is being allocated to defense spending and the chance for Lockheed to lock in many more lucrative contracts increases. In 2018 alone, defense spending increased by almost $28 billion compared to the 2017 budget. During 2019, defense and military spending will increase another $20 billion and total $652 billion.

Growing dividends are not the only reason to own Lockheed Martin in your portfolio. As has been noted earlier, Lockheed Martin continues to grow its total revenue and gross profits.

This growth has resulted in a year to date share price increase of 45.4%. Taking a look over the last 5 years and Lockheed Martin shares have grown 105% in share price alone! The reinvestment of dividends would also increase the overall capital gains returns over these time periods.

Despite any political risk, Lockheed Martin will still see solid profits and revenue over the next several years. Combined with a growing dividend, the company's share price has plenty of room to appreciate. This means that the total shareholder return could outclass many other similar stocks in the future. So go ahead and pick up a couple of shares of Lockheed Martin for the capital gains, and stick around for the continued dividend growth.