In the early days of private-label packaged foods, a retailer's notion of private labels was something of an afterthought. The word "generic" was often used interchangeably, and simple black-and-white packaging left much to be desired. Quality also didn't appear to be a priority.

Much has changed since then. Some grocers have turned their private-label brands into lines that are as well regarded as -- if not more beloved than -- comparable options from packaged food companies like Kraft Heinz or General Mills. Recent data from the Food Marketing Institute (FMI) and market research outfit IRI indicates nearly half of all consumers now specifically seek out a private-label product.

If the trend continues as is, warehouse club retailer Costco (NASDAQ:COST) is quietly poised to leverage its surprisingly large and popular house-brands business. That's saying something, considering how well Kroger (NYSE:KR) and Walmart (NYSE:WMT) have cultivated their own private-label brands. 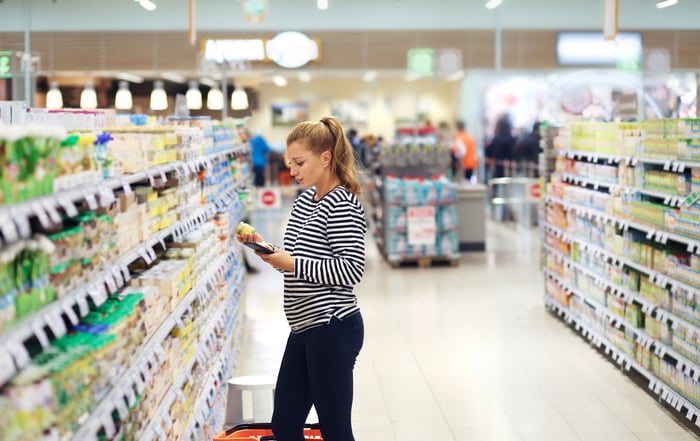 High margin but low volume, except for Costco

It's possible you're a buyer of private-label goods without even knowing it ... which is the point. A retailer's own products should fit seamlessly side by side with alternatives. Kroger's Simple Truth line and Target's (NYSE:TGT) new Good & Gather are both examples of in-house creations.

It's Costco's Kirkland's Signature, however, that remains the powerhouse within the private-label arena. The company generated $39 billion worth of revenue with Kirkland's last year, making up roughly one-fourth of all sales, up 11% from 2017's comparison of $35 billion. Costco alone accounts for nearly 30% of all the United States' private-label grocery business, according to estimates from FMI and IRI. For perspective, the Private Label Manufacturers Association says the category only accounts for about 17% of all grocers' collective top lines.

It matters. Not only can an internally curated selection of packaged foods fill inventory voids, but they can also boost the bottom line. Whereas profit margins on third-party-branded foods can be on the order of 1% to 2%, gross margins on private-label goods can frequently reach between 25% and 30%.

We're now reaching an era in which house brands aren't just the cheap alternative, though; house brands are increasingly the consumer's intended purchase. This shift plays right into the hand Costco has already proven it's holding.

Per its most recent poll, the Food Marketing Institute says 46% of grocery buyers now say private-label brands are "very influential" when it comes to deciding which food retailer they'll shop. That's up from 35% just three years ago using the same set of questions from FMI. And the data echoes a similar finding from Coresight Research posted earlier this year, suggesting that more than half of U.S. shoppers visit a particular retailer to purchase a private-label good.

The dynamic is more than it seems on the surface though. "Food retailers should be very pleased that their brands are becoming bigger factors in how consumers shop," the FMI/IRI study comments, adding, "This gives retailers the opportunity to further drive loyalty and trips."

Not all food retailers can or will respond the same way to the evolution of the private-label business when it comes to making an in-house good a must-have purchase. The report comments that "challenges remain for private brands' image, such as its packaging" and further recommends retailers ask themselves, "How can I double down on marketing to emphasize how my private brands provide a point of differentiation?"

Still, it's an opportunity that, just a few years ago, was nowhere near as significant as it is now.

Credit has to be given where it's due. Kroger's Simple Truth brand, as well as house brands offered by the likes of grocers ranging from Aldi to Trader Joe's, are all proving to be drivers of foot traffic, as are the private labels of Walmart and, increasingly, Target.

It's Costco, however, that appears to understand and fully embrace what its Kirkland's Signature brand is and how to create the "differentiation" the Food Marketing Institute's report suggests would be the proper next step. Coresight Research CEO Deborah Weinswig wrote of her company's findings earlier this year that Kirkland's has built "a reputation for quality at low prices."

If nothing else, Costco is further down the private-label learning curve than its rivals are. That, particularly given how much of its business is already made up by house brands, offers the club-based retailer an investment-worthy edge over its competitors.

All of a sudden, that $450 million investment Costco made in October in its own chicken farm in Nebraska makes a lot of sense.