Please ensure Javascript is enabled for purposes of website accessibility
Log In Help Join The Motley Fool
Free Article Join Over 1 Million Premium Members And Get More In-Depth Stock Guidance and Research
By Theodore Kim - Nov 20, 2019 at 8:13AM

But they aren't going it alone.

First, they dominated the market for internet search. Later, they became the media sector's most popular broadcaster as YouTube attracts more daily views than any TV channel in the world. They lead the pack in driverless car development. And now, Alphabet (GOOG 2.68%) (GOOGL 2.63%), the parent company of Google, has set its crosshairs set on financial services, announcing that it will partner with national banks to offer checking accounts.

Google is so dominant in many markets that it is now facing scrutiny from the US Department of Justice for violations of antitrust regulations. Similarly, Microsoft spent years battling with the DOJ before finally settling, but still went on to generate robust growth in top-line revenues. Despite the considerable run-up in share price over the last year the future for Alphabet is bright. 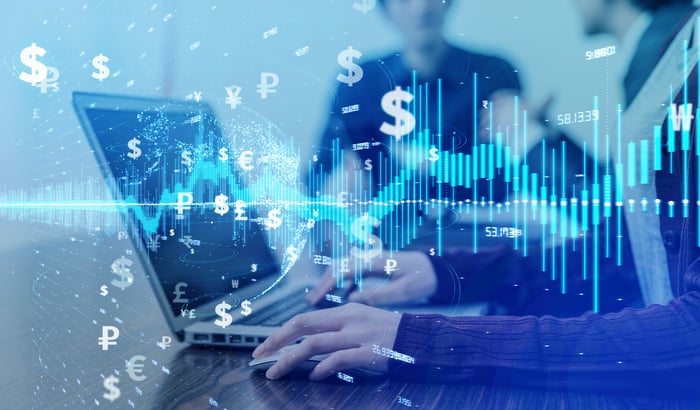 Google can do the heavy data lifting

Google's entry into the highly competitive sector of retail banking is not a surprise. Established banks are good at building brand equity, client-facing sales and marketing. However, compared to many other sectors, US banks are weak at almost everything, including controlling expenses, streamlining operations, enhancing productivity and successfully targeting the high growth market segment of millennials. That's where Google steps in. Retail banking, apart from initially attracting client assets, is primarily a complex exercise in large scale data management. If there is one core strength about Google, it's their dominance of the data industry.

Already, Google has established itself a Big Three Cloud Computing provider – alongside Amazon's (AMZN 3.53%) Amazon Web Services (AWS) and Microsoft's (MSFT 2.43%) Azure. Data services offered by cloud providers are becoming increasingly comprehensive and sophisticated. Essentially, if a bank establishes brand equity to get clients upfront to open an account, a cloud services provider can perform the bulk of most everything else entirely on an outsourced basis at rock bottom costs. And Google understands data management and cloud services like McDonald's know French fries.

Data is the world's hottest industry

According to an analysis by the IT consulting firm Gartner, the global cloud computing market is growing at 17.5% annually and should surpass $330 billion by 2022. As more and more financial service firms migrate the bulk of their operations to a cloud services provider-whether Google, Azure or AWS-the market could grow even faster. A joint venture between big banks and Google is not just a good idea, it is a means of survival.

Already, banks are facing competition from fintech start-ups that began with zero brand name recognition but grew their client base rapidly through leveraging technology. Money transfer services that act like virtual banks with hardly any bricks and mortar presence are starting to offer debit and credit cards. The most notable of this cohort of virtual banks may be Apple Pay, a business unit of Apple.

"Our approach is going to be to partner deeply with banks and the financial system," Google executive Caesar Sengupta said to the Wall Street Journal in an interview. "It may be the slightly longer path, but it's more sustainable."

Google has made large bets across the global economy. With their core in internet search, a tried and true cash cow, the move into expanding market for smart devices, and now retail banking, Google is well-positioned to grow revenues along with the increasing affluence of the millennial market. Far from relying on any old established businesses, almost every quarter, Google is rolling out more new features to attract more new millennial users almost every quarter. For instance, one new feature on Google maps will enable users to identify the nearest ridesharing and bike or scooter sharing options available. This strategy fits in perfectly with the precipitous fall in automobile purchases by millennials, particularly those living in urban areas.

Google is clearly targeting the future of the global economy. Despite this year's run up in valuation, with market cap now surpassing a record $900 billion and a PE ratio of 28, Alphabet stock looks like a solid bet for a long term hold.