With the announcement on Nov. 13 that American Outdoor Brands (NASDAQ:SWBI) will split in two, it's hard to escape the conclusion that the gunmaker made a mistake when it entered the outdoor recreation market five years ago.

The two segments will now go their separate ways with the firearms business reviving its old Smith & Wesson Brands corporate moniker, and the outdoor products and accessories business spinning off as a new publicly-traded company while keeping the American Outdoor Brands name. 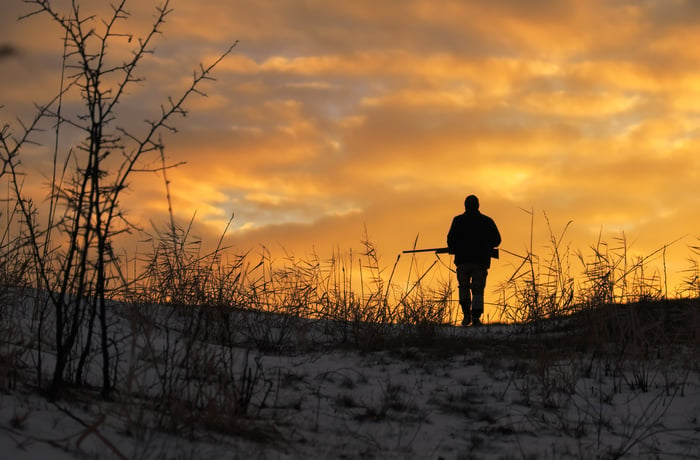 Despite the hoped for synergies, the two business lines turned out to have completely different needs and objectives. And as the firearms market has become even more polarizing and volatile, it may have held the outdoor products business back from realizing its full potential.

So the split does make sense, but that doesn't necessarily mean either stock will be a buy after the reorganization.

American Outdoor Brands management outlined the different strategies each company will pursue, reflecting that the firearms market is a $4 billion opportunity, but the outdoor recreation market is an order of magnitude larger at $30 billion to $35 billion.

The new Smith & Wesson will focus on organic growth through product development, while American Outdoor will grow via organic and inorganic means by acquiring more brands.

Of course, that was part of the rationale Smith & Wesson originally used to enter the outdoor products and accessories space in the first place, and then to change its name to American Outdoor Brands. However, the strategy hasn't quite worked out as planned.

Outdoor product revenue has largely only grown because of acquisitions made early on. Organic sales were up only 1.2% last year, and in the first quarter of fiscal 2020, sales fell 10% while gross profits contracted almost 17% -- though tariffs played a large role in that, as almost all of its products are made in China. Its firearms sales have been depressed because of a broader industry slowdown.

An unfriendly climate for gun sellers

But the spinoff decision was driven more by the growing divisiveness around the gun industry, which American Outdoor Brands management believes is holding back the growth of its outdoor products and accessories business.

Many financial institutions, for instance, now refuse to do business with American Outdoor, and though some banks continue to support its initiatives -- and will keep providing financing to Smith & Wesson after the spinoff -- this has limited the options available to the combined company. Once the separation is complete, there will likely be many more institutions willing to offer the new American Outdoor Brands financing, and it may receive more support from other businesses, too.

Vista Outdoor (NYSE:VSTO) suffered similar pushback when retailers like R.E.I., Mountain Equipment Co-op, and others stopped doing business with it or carrying its brands, because it owned Savage Arms, a rifle and shotgun business. After Vista sold off Savage, R.E.I. announced it would once again carry Vista's products.

The split by American Outdoor also gives its shareholders the option of deciding whether they want to own a firearms stock or an outdoor products stock -- or both. A number of large institutional investors have been creating special investment vehicles to segregate their firearms holdings in response to clients who have been pressuring them to divest from the firearms industry altogether.

Yet a separate American Outdoor Brands isn't necessarily a buy. Where Smith & Wesson Brands will immediately be a leading name in the firearms business, American Outdoor will be just one of many players in a much bigger space. It will be competing against the likes of Vista Outdoor, Johnson Outdoors, Newell Brands, and numerous others. Even Walmart has a foothold in the segment through its 2017 acquisition of Moosejaw.

Smith & Wesson will be the bigger company post-split with an estimated $450 million to $500 million in annual sales, compared to an expected $200 million to $210 million at American Outdoor. Gun sales are also expected to start growing again as National Instant Criminal Background Check data is forecast to remain flat or rise indicating greater demand, particularly as the presidential election heats up next year.

Smith & Wesson will continue to be headquartered in Massachusetts, while the outdoor products company will make its home base in Missouri, where its new warehousing facility is located. However, the gunmaker will own the Missouri headquarters and lease it to American Outdoor, while the latter will continue to warehouse firearms for distribution.

Current CEO James Debney will transition over to the new American Outdoor Brands while Smith & Wesson's president of manufacturing services Mark Smith will become CEO of the firearms business.

A good argument for investing?

There are a lot of good reasons for splitting this company, which is why American Outdoor Brands stock rose following the news. Yet many of those rationales existed at the time the two businesses originally came together, and in fact, were the arguments in favor of Smith & Wesson branching out from guns in the first place.

Because the current environment for the firearms business is so volatile though -- arguably worse than it was several years ago -- separating the two businesses just makes sense. Whether either stock becomes a buy on its own remains to be seen.