Customer counts are still climbing, but the connected fitness specialist is miles away from profits.

Peloton Interactive ( PTON -3.98% ) is moving beyond its high-end connected stationary bicycles and plans to introduce a rowing machine and a cheaper treadmill, but that does nothing to mitigate analyst concerns that the addressable market for pricey spinning bikes is not anywhere large enough to sustain a growth stock.

CEO John Foley told analysts that profit is a secondary concern. "I believe if we pulled back on growth, we could be profitable tomorrow," he told analysts on Peloton's first earnings conference call as a public company, "but that is not what the board and the leadership of Peloton believes we should do."

With a devil-may-care attitude about Wall Street's desire for profits, Peloton may soon find itself sweating investor support. 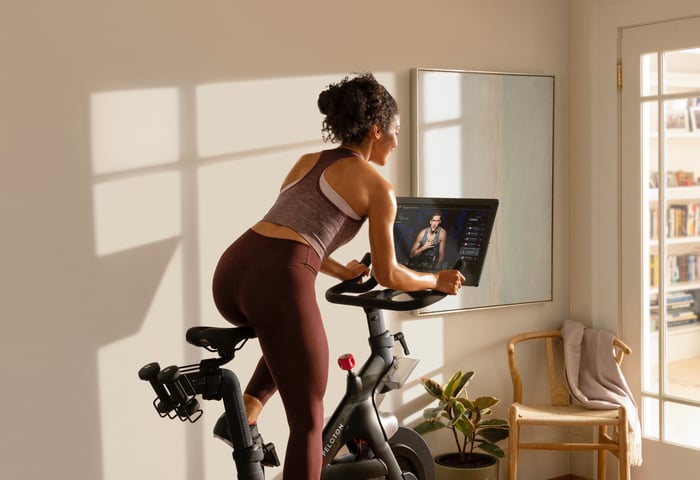 Peloton's first earnings report as a public company should have been well received. Sales more than doubled year over year, deflating analyst worries that revenue growth would decelerate, as did its connected fitness subscribers, which rose 103% to 562,774. That boosted subscription revenue to account for 29% of the total, or $67.2 million.

Yet despite net losses improving to $49.8 million from $54.6 million, it also faces higher expenses, a need to keep marketing its product to reach new customers (such costs represent 37% of sales), stalling subscriber growth rates, and growing customer churn.

While retention remains high, at 94%, churn of connected fitness customers jumped to 0.9% from 0.5% last year. That's still a small number, but it's notable because first-quarter churn has always been lower sequentially and year over year -- this time it was higher for both.

It's something to watch, and it might also inform some of the concerns analysts have about the addressable market for upscale fitness geeks looking for in-home classes. New equipment that's more accessible to more people could generate greater sales, but it might drag out Peloton's quest for profitability -- especially if margins don't expand enough due to increased manufacturing costs.

The high cost of staying fit

Peloton is actually more than just stationary bikes, though that may be what it's best known for. Also included in its repertoire is a mix of ancillary hardware, including wearables, subscription services, and even apparel. Yet it all comes at a price.

Its stationary bike sells for $2,245 but also requires a mandatory subscription to its connected classes that start at $39 per month. Its treadmill is priced at a wince-inducing $4,295, with a similarly required subscription attached, though you can pay for both pieces of equipment on an installment plan. It also offers a $20 monthly subscription if you just want to take its classes but don't want to shell out for a bike or a treadmill.

Peloton hasn't come out with an announcement about new equipment, but Bloomberg reports it is working on a cheaper version of its treadmill as well as a rowing machine, which the news site says would be the first pieces of new equipment in over two years. Peloton is also looking into apps that would be compatible with the Apple Watch and Amazon.com's Fire TV.

The need to bring in more subscribers can't be overstated as growth rates moderate. Although connected subscribers doubled year over year, they added just 52,000 quarter to quarter, one of its smallest increases since it began prepping for its IPO. Moreover, competition is moving into its territory.

Last month, Nautilus ( NLS -5.55% ) launched its Bowflex C6 indoor cycling bike that lets users access its open platform to connect to any streaming class through their respective apps, including from Peloton. But the bike costs half the price of a Peloton bike.

Less costly equipment from Peloton might help bring in more customers, but despite fancying itself a tech company, it might not do enough to lessen the pressure on near-term profitability. Marketing expenses are high to attract customers, and the company is still losing buckets of money. Investors might soon start realizing that, like riding one of its bicycles, Peloton is going nowhere fast toward making a profit.

Why Peloton Stock Dipped on Monday