Sometimes the holiday season can feel less like a celebration and more like a multiweek assault on your wallet. There are gifts to buy, cards to send, meals to eat, and places to travel to. It's an  interminable process that generally begins on Thanksgiving (though many retailers have been offering deals since the moment they packed up the Halloween decorations) and continues through New Year's Day.

It's hard to avoid overspending during this festive time of year on one (or likely more) of those categories mentioned above. In fact, in 2018, the average U.S. consumer spent $1,173 on holiday-related shopping during November and December, based on aggregate data from Bank of America's credit and debit card customers.

"The holiday season is one of the most popular times of year for consumers' wallets," according to Bank of America Credit Cards executive Jason Gaughan. "Between purchasing gifts, booking airline tickets to see loved ones, and hosting friends and family for meals, many have come to anticipate the holiday splurge." 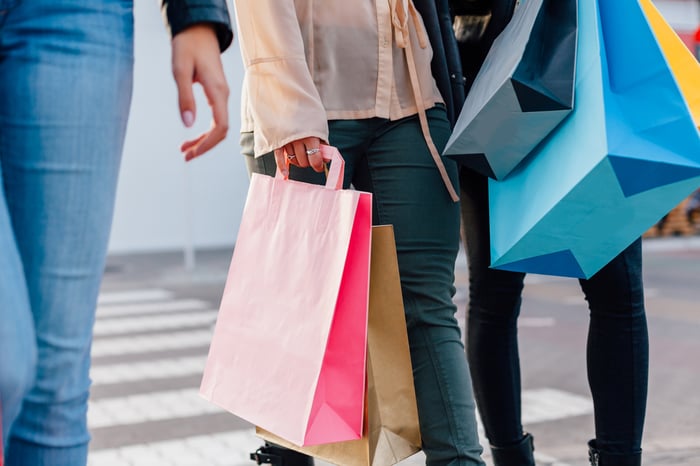 Holiday shopping can put a dent into your budget and cause lasting financial problems. Image source: Getty Images.

Do the big days still matter?

Black Friday may have faded in importance due to Christmas Creep, with retailers launching their seasonal discounting wave on Nov. 1 -- but it's still a huge sales day. It was the biggest retail day of 2018, according to the Bank of America data, and it had the highest number of retail transactions -- 76% more than the average day.

Consumers spent 121% more than they did on an average day, and  Black Friday clothing store sales, in particular, soared a whopping 246% above the average day's numbers. Cyber Monday can clearly still move the needle too: Online retail purchases surged to a 40% share of purchases made with debit or credit cards, compared to 22% on an average day.

Of course, shoppers are still heading to brick-and-mortar stores, at least for some items, some of the time. On Black Friday itself, 52% of all electronics sales happened in physical stores while 39% took place online. (The remainder of sales involved a combination of online and in-store channels.) On Cyber Monday, however, 61% of electronics sales were purely online while 25% were made in traditional stores.

You can be frugal

Having a budget and sticking to it does not require you to be a Grinch. It does mean, however, that sometimes you say no when you'd rather say yes. That might mean explaining to your family why you can't visit, or sitting the kids down to talk about why they won't be getting every gift on their wish lists this year.

The excitement of the season and the sense that the holidays come with a financial-responsibility get-out-of-jail-free card make it awfully tempting to break your budget. Avoiding that becomes somewhat easier if you start by crafting a well-defined plan, and remember that there is no holiday exception -- how you spend in November and December could have an impact on your finances for months or even years.