Please ensure Javascript is enabled for purposes of website accessibility
Free Article Join Over 1 Million Premium Members And Get More In-Depth Stock Guidance and Research
By Theodore Kim - Nov 20, 2019 at 10:06AM

Microsoft ( MSFT -1.97% ) is going from strength to strength. The share price recently closed at a new all-time high, making Microsoft one of the most valuable companies in the world. This new high was hit just weeks after the surprise announcement by the US Department of Defense that Microsoft had won a giant $10 billion Joint Enterprise Defense Infrastructure (JEDI) contract to provide cloud computing services. The award is one of the largest public-sector IT contracts in US history. The latest quarterly earnings release on October 23rd showed that the company generated record annual revenues of $130 billion, a year on year increase of 14%, with the strongest growth in commercial Software as a Service (SaaS) and Cloud computing. This is not the Microsoft of the last decade. The company has left behind the intensely competitive, low-growth consumer desktop market and established itself as the dominant player in the global data services industry. 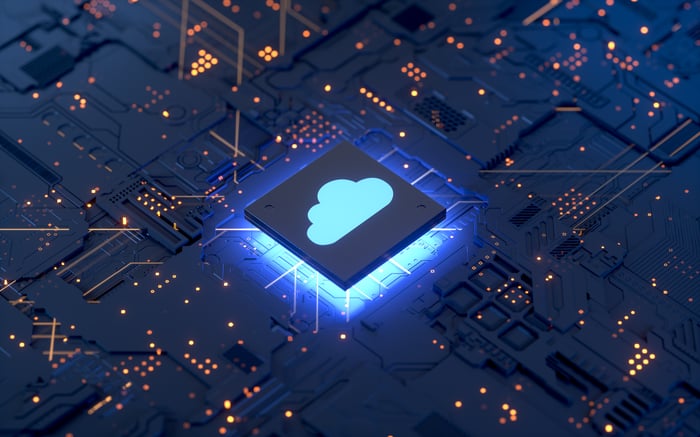 Out of the Desktop and Into the Cloud

Historically, Microsoft built its market domination on the consumer desktop. On the way up, that near-monopoly control turned the desktop into a cash cow and enabled the company to invest aggressively in a vast array of high growth product lines. On the downside, although that cash cow is still producing milk, the consumer desktop is a decidedly low growth business. And Microsoft knows it.

For the last quarter, Microsoft Office commercial products and cloud services revenue increased by 13%. Revenue in Intelligent Cloud was $10.8 billion and increased by 27%. LinkedIn revenues, which come predominantly from corporate advertising, shot up by 27%. By comparison, Office consumer products increased by only 5%.

Earnings per share last quarter hit $1.40, up 22% from the prior year. Generating constant double-digit EPS growth for a company that generates well over $100 billion in annual revenues and historically built its strength from a mature market is a truly impressive feat. What is more impressive is that Microsoft realized that the consumer desktop essentially had become an entry-level discounted product line for the company. The home version of Office draws in massive foot traffic and is a profitable business, but it very much product-based. Office is sold on a perpetual license. While consumers can later upgrade at a cost, revenues are not automatically recurring. By contrast, sales of SaaS, such as Intelligent Cloud, are billed every month and are more or less recurring revenues.

The future is data: Azure and the cloud

There are many examples of companies that were managed based on their massive success in the last decade. But that success stayed in the previous decade. By contrast, for the last several years, Microsoft has aggressively invested and positioned itself for the next decade with its focus on data-linked business. This investment has clearly been demonstrated by the success of Microsoft Azure.

Microsoft Azure offers businesses a wide variety of web-based services, including data storage, analytics, computing, e-commerce, and mobile. All of these services are high growth as more and more firms, from small businesses to Fortune 500 corporations, outsource the bulk of their increasingly complex IT demands to reliable third-party providers.

While Microsoft does not report Azure-specific data, it does release results for cloud business lines, which include a variety of cloud-based SaaS businesses. Put together, Microsoft's commercial cloud businesses grew 41% in the first quarter of 2019 to $9.6 billion Well before the massive $10 billion JEDI contract win, Microsoft reported the annual growth rate for Azure at a stellar 73%.

More importantly, the bulk of Azure revenues are recurring. Unlike consumers making a one-off purchase of generic hardware offered by a multitude of PC manufacturers, a business subscribed to Azure will most likely continue to subscribe, year after year, tom meet ever-increasing demands for IT services. The excessive costs of migrating to another cloud provider help ensure that the revenues, once begun, are sticky. Companies see their data management expenses much like a consumer treats a utility bill that must be paid to the same utility in perpetuity. In this case, Microsoft is that utility and should be able to rely on steady, recurring, and growing revenues from data-centric businesses.

While some analysts think the company has had an unbeaten run, and it is time to take profits, future growth for Microsoft is only beginning. Much like Amazon, Google, and Facebook, Microsoft has now fully transitioned into a data service-centric firm focused on the parts of the global tech business that should deliver the highest growth and the highest margins.

The consumer desktop era for Microsoft is long in the past. Winning the Joint Enterprise Defense Infrastructure contract will likely be just one of many massive wins for Microsoft in the data space. With data-centric cloud and SaaS businesses now at its core, this is not your granddaddy's Microsoft. Microsoft stock is a bet on the global data industry and a good buy for a long term hold.