Just in time for the holidays, Walmart (NYSE:WMT) is stepping onto Home Depot's (NYSE:HD) turf in a big way.

The retail giant is launching a wide-ranging line of tools in areas from home improvement to lawn and garden to automotive, including items like leaf blowers, lawn mowers, and chain saws. Operating under the brand Hart, which will be exclusive to Walmart, the new product line works with an interchangeable battery platform of 20 or 40 volts, allowing Walmart customers to layer on new tools according to their need. Since Hart tools don't require cords or gas or traditional batteries, the rechargeable platform should help create a valuable brand ecosystem, as customers are likely to expand their collections over time.

Walmart is launching a selection of Hart products ahead of the holidays and will sell a complete set of over 340 items by next spring, rolling it out in time for next year's spring home improvement season. Hart is made by TTI, the same company that makes Milwaukee, Ryobi, and Hoover. 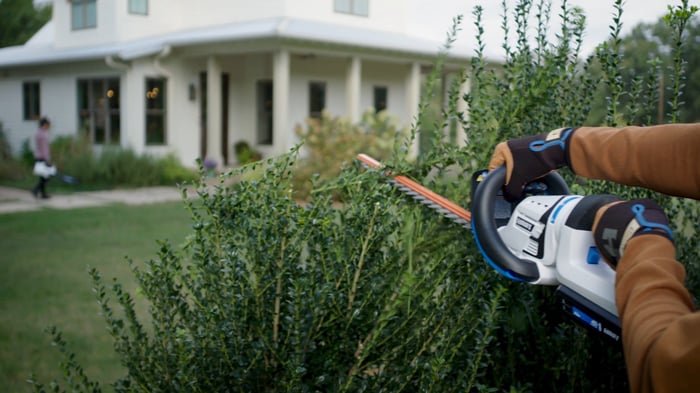 A Walmart rep explained that the launch of the premium Hart line came as the company saw an opportunity to offer higher-end products for the DIY homeowner that are comparable to Ryobi at Home Depot or Craftsman at Lowe's (NYSE:LOW). Customers were asking for higher-quality tools, and the company saw a need it could meet, especially as it already has significant exposure to the DIY customer with its dominant retail position in rural America.

Though Walmart offers a similar line of products at a lower price point, its entry-level Hyper Tough tool line, it makes sense for the company to target a higher-end customer. The retailer has moved away from its traditional bargain-bin positioning as consumer tastes have changed. Today many Americans are looking for the best value rather than the lowest price, and they put a premium on quality. Walmart also does brisk sales in consumable items in the automotive area like motor oil, which means that DIY-type customers who might be interested in Hart tools visit frequently.

It's no secret that home-improvement has been a fast-growing segment in retail in recent years. Sales in the category have increased nearly 50% over the last decade according to the Census Bureau, and now make up nearly $400 billion in annual sales, much of which go to Home Depot and Lowe's. With its massive store footprint, steady traffic, and reputation for low prices, there's little reason why Walmart couldn't compete with Home Depot and Lowe's in categories it chooses to.

Walmart has seen sluggish growth in general merchandise sales recently, relying on its grocery segment to drive sales growth through initiatives like online grocery. In its most recent quarter, the company reported just low-single-digit growth in comparable sales, though it said home and hardware lines delivered strong results, especially in private brands. Walmart has been focusing more on private-label brands to capture higher-margin sales and leverage its store base and e-commerce platform.

As the retailer looks for growth in general merchandise, home improvement presents itself as a natural opportunity for Walmart to grow sales, one that expands its profit margins more than other higher-volume categories like groceries.

Finally, Walmart can support the new product line both with its stores, where it can introduce customers to more popular items, and also with its e-commerce business, which can carry more specialized items that also operate on the same Hart platform.

Like it's done with Allswell in mattresses, MoDRN in furniture, and Parent's Choice in baby products, Walmart should continue to launch new private and exclusive brands to help differentiate it from the competition. With its network of stores, economies of scale, and reputation for low prices, Walmart is capable of competing in any retail category it sees opportunities in.