So far in 2019, the healthcare sector has trailed the S&P 500. It might be that the market has been spooked by political worries. Nonetheless, there are some fantastic opportunities in this sector.

InMode (NASDAQ:INMD) is a recent initial public offering that's nearly quadrupled in value in three months. Amarin (NASDAQ:AMRN) is one step closer to U.S. Food and Drug Administration review of a future blockbuster drug. And Arrowhead Pharmaceuticals (NASDAQ:ARWR) has crushed the market all year, returning 261% to its investors. Any one of these three health stocks could be right for your portfolio. 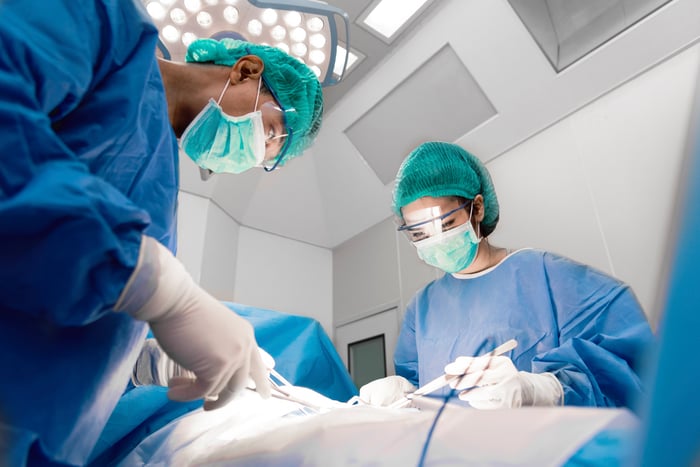 A tiny Israeli company has a new, noninvasive way to perform plastic surgery using radio waves. So far, the market reception has been incredible. InMode IPO'd at $14 a share in August. Three months later, the stock is trading at $54 a share. Why is it running up?

There are more than 8,000 plastic surgeons in the U.S. InMode has captured over 2,400 U.S. customers, so it's already made a sizable dent in its largest market. It is synonymous with using radio waves to avoid surgery or lasers. The Forma "noninvasive face-lift" is popular with many celebrities, including Kim Kardashian, Chrissy Teigen, and Emma Roberts.

The company does not give a total addressable market in its S-1, but cites the American Society for Aesthetic Plastic Surgery for the fact that U.S. consumers spent $8.5 billion on aesthetic procedures in 2017. The market for plastic surgery instruments is a niche market, estimated to be worth almost $1 billion in the U.S. The company is currently trading at 47 times trailing earnings, suggesting much of its future growth is already priced in.

Amarin has a future blockbuster on its hands. The company's drug, Vascepa, has already been approved as a pill that would reduce a patient's triglycerides. This is important because high triglycerides increase risk of heart disease.

Last year, Amarin shocked the world by announcing the results of its phase 3 study. It was a huge five-year study in more than 8,000 people with high triglycerides. It showed that Vascepa reduced heart attacks by 31% and strokes by 28%. And the pill reduced cardiovascular deaths by 20%.

The stock skyrocketed, running up 585% in 14 months. Last week, Amarin's stock had another run-up as the FDA's advisory committee voted 16-0 to expand the pill's label to include this new information.

How big is this news? Dr. Deepak Bhatt, who conducted the Harvard study, said, "This may be the biggest development in cardiovascular prevention since statins." Statins are a class of billion-dollar drugs that reduce cholesterol. One statin, Lipitor, made $12.8 billion for Pfizer at its peak.

This is important because Amarin's phase 3 trial suggests that statins are insufficient. All the patients in the study were on statin medication. Some patients had a statin plus placebo. Other patients had a statin plus Vascepa. Those people on placebo who had heart attacks, strokes, and died during the study had those events despite being on statin medication.

On Monday, a Citigroup analyst reduced his rating on Amarin from buy to hold. He is forecasting Amarin to achieve Vascepa sales of $3.2 billion by 2024. That's a sizable increase from current revenue. (Amarin is expected to achieve roughly $400 million in sales from Vascepa in 2019.)

Of course, $3.2 billion in sales would be wonderful. But that number might be too conservative. This is a huge market opportunity -- one in three Americans have high triglycerides, according to the Centers for Disease Control and Prevention. If triglycerides are just as important as cholesterol, and statins reduce cholesterol but don't do much for triglycerides, then it's entirely possible that Vascepa sales might rival what Lipitor and other statins accomplished. The ultimate market for Vascepa might be three to four times higher than what Citigroup is forecasting.

Arrowhead Pharma has amazing numbers. The biotech has a profit margin of 33%, and revenue growth of 5,770%. And yet it doesn't have any drugs on the market. What's skewing the numbers is the impressive deal the company scored with Johnson & Johnson in Februrary. The health giant licensed one phase 2 drug for hepatitis B, and the rights to license three other drug candidates. In exchange, Arrowhead received $175 million in cash and another $75 million in stock investment. Future milestone payments could go as high as $3.7 billion.

Arrowhead's gene tech is impressive. It's focused on RNA interference (RNAi), a market spearheaded by Alnylam Pharmaceuticals. And it's going after major targets including cystic fibrosis, cardiovascular disease, and liver disease. In addition to its Johnson & Johnson deal, the company is collaborating with Amgen, which gave Arrowhead $35 million upfront and agreed to pay up to $617 million in milestone payments, plus royalties, for access to the company's cardiovascular drugs.

So far there's only one RNAi drug on the market, Alnylam's Onpattro. The larger biotech has filed a new drug application for a second RNAi drug, Givosiran, and hopes for approval by early next year. In contrast, Arrowhead is a few years away from any approvals, as it has no drugs in phase 3 yet.

The company is sitting on $236 million in cash and has no debt. Optimism is high as the stock has quadrupled since the deal with Johnson & Johnson. While the science is highly promising, Arrowhead is a risky biotech and is not an investment for the faint of heart.