Some dollar stores offer items that cost more than $1. That's necessary if those companies hope to meet the needs of their customers, who seem to accept higher prices on some products as long as the perception of value remains high.

That's the slippery slope Five Below (NASDAQ:FIVE) must navigate as it adds a section with items priced higher than $5 to its stores. If the company handles the change well and "wows" consumers with deals on merchandise it previously could not offer, it might be able to strengthen its brand with the change.

There is a risk, however, that breaking the $5 price barrier makes some consumers less likely to shop at the chain. That's why the discount retailer has to be very careful and make it clear that it remains committed to being a high-value chain where most items cost less than $5. 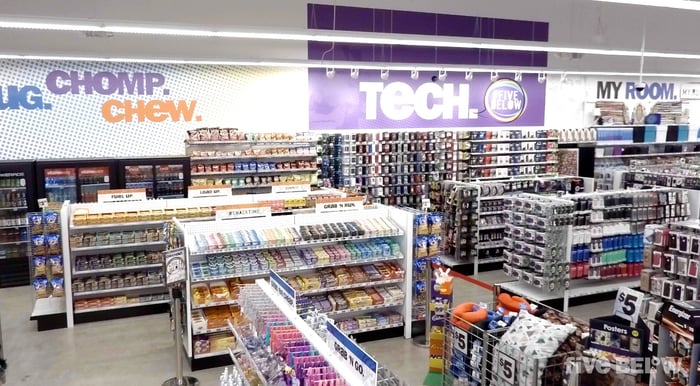 Five Below is testing adding items that cost more than $5. Image source: Five Below.

The risk of building a name tied to price

Branding your company "Five Below" creates an expectation that the items it sells will cost less than $5. That's an easy way to communicate with consumers, but it's also a calculated risk because inflation or rising costs for goods could eventually make that price point harder to hit.

The challenge for Five Below isn't in introducing items it's never sold before. Consumers are likely to appreciate it adding sub-$10 video games, for example. The problem will come when it has to raise prices of items that were once sold for under $5 and their price rises above that threshold. That could happen with products like headphones, charging cables, and some of its clothing items.

CEO Joel Anderson explained the pricier items and the thinking behind adding them during his remarks on the company's first-quarter earnings call in June. He seemed to clearly understand where customer concerns may arise. He also explained that the idea is a test that will be in 25 stores in Q2.

"The feedback from our customers continues to be positive," he said. "They are enjoying additional values in areas like Tech and Room. For example, we are offering a digital camera, amazing gaming headphones each for $10, true values."

Anderson is taking these changes slowly, and the company has not even decided on a name for the section ("JUST WOW" and "Ten Below" are being tested).

This has to happen

Keeping your entire store stocked with items that cost less than $5 will eventually become untenable. The retailer can succeed by keeping to that spirit while relentlessly pursuing value. A customer may be happier paying $6 for a quality item than less than $5 for a cheaper version that does not last.

Five Below has to walk a tightrope when it comes to stocking its shelves. Items priced above $5 must literally "wow" customers and make them feel the chain is justified in offering the pricier merchandise.