Growth accelerated during the third quarter, but not by as much as management had predicted.

Even after seeing a rare outlook downgrade three months ago, investors were optimistic heading into Home Depot's ( HD -1.19% ) third-quarter earnings report. The home-improvement retailer noted that sales gains sped up during each month of the second quarter, so shareholders were expecting better operating numbers for the second half of 2019.

Home Depot's actual results this week met that optimistic outlook when it comes to finances. However, the chain's growth struggles didn't lesson, as investors had hoped they would. 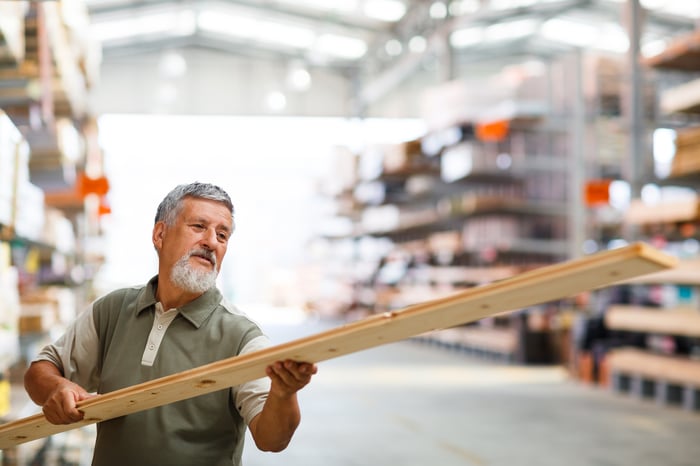 Comparable-store sales accelerated for the second consecutive quarter, rising to 3.8% compared to 3% last quarter and 2.5% to start the year. Yet that amount of growth was a modest disappointment. Comps improved by over 4% in June and by nearly 5% in July, management said back in late August, which implied a more robust acceleration for the third quarter.

Instead, Home Depot's customer traffic inched higher by 1.5%, and average spending rose by less than 2% to mark a significant slowdown from the 3.6% spike in the year-ago period. Executives didn't blame lumber price volatility or tariffs, as they did during the summer, but instead cited delayed returns from its multichannel growth investments. "Sales were below our expectations driven by the timing of certain benefits associated with our...strategic investments," CEO Craig Menear said in a press release.

The weaker operating trends hurt Home Depot's earnings profile. Gross profit margin dipped to $9.39 billion, or 34.4% of sales, from $9.15 billion, or 34.7% of sales. Rising selling expenses combined with that move to push operating margin down, too.

At the bottom line, Home Depot's pre-tax earnings barely rose, landing at $3.67 billion compared to $3.65 billion a year ago. Aggressive stock repurchase spending amplified that move so that per-share profit rose to $2.54 from $2.53 last year.

Executives said they were encouraged by the wider business momentum, and they implied that they still expect to see strong returns from recent investments like faster home delivery and pickup options, just not during this particular fiscal year. To that end, Home Depot lowered its growth outlook for the second straight quarter and now predicts that comps will rise by 3.5% for the year. That target stood at 4% three months ago and was roughly 5% at the start of the year.

On the other hand, investors will have to adjust to a slower sales growth pace that's more persistent than just the temporary speed bump Home Depot described back in August. Following 5% comps gains in 2017 and 2018, and multiple sales outlook upgrades along the way, the consumer discretionary business is cooling off a bit heading into fiscal 2020.