Please ensure Javascript is enabled for purposes of website accessibility
Free Article Join Over 1 Million Premium Members And Get More In-Depth Stock Guidance and Research
By George Budwell - Nov 21, 2019 at 10:29AM

Cronos stock could pay off handsomely for patient investors, but the road ahead is highly uncertain.

Like all Canadian pot stocks, Cronos Group ( CRON 2.00% ) has had a forgettable 2019. Despite starting the year off on a high note, Cronos' stock has now lost a third of its value this year. The unrealistic expectations of marijuana investors heading into the year coupled with the painfully slow development of the legal cannabis market in Canada have caused valuations to crater over the back half of 2019. What's more, several American and Canadian pot companies have gotten caught engaging in rather questionable behavior this year, which has eroded investor confidence even further.

All of this doom and gloom, though, may be nearing an abrupt end. Yesterday, a House Judiciary Committee in the U.S. green-lit a bill that would effectively legalize marijuana at the federal level by removing it from the Controlled Substances Act. 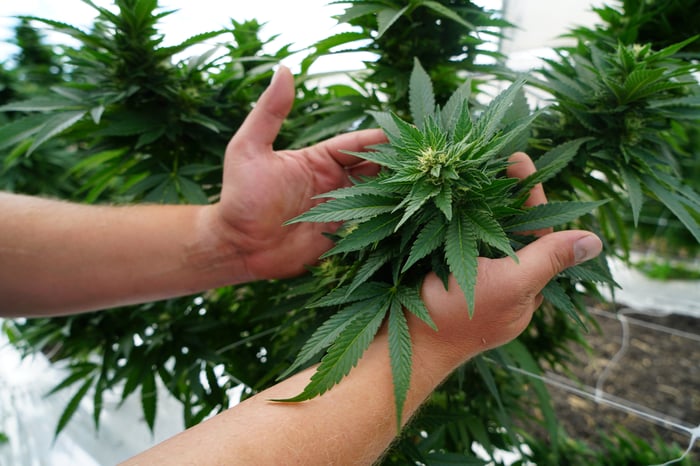 Although this bill may not see the light of day in either the full House or the Republican-controlled Senate, this unprecedented legislative development still shows that support is steadily growing for sweeping marijuana legislation in the not-so-distant future. Stated simply, there's a glimmer of hope now that the 2020 election cycle could indeed spell the end to federal prohibition on pot in the United States -- a seismic shift that would open up a $100 billion market for struggling cannabis pioneers like Cronos.

With the U.S. slowly inching toward widespread legalization, should bargain hunters take advantage of the sizable downturn in Cronos' stock this year? Let's break down the pot company's core business strategy to find out.

Where is Cronos headed?

A lot of negativity has been thrown at Cronos this year over its awful quarterly sales figures, rapidly declining per-gram prices, and ballooning goodwill. To be fair, these same criticisms can be levied at nearly all Canadian pot companies right now, so Cronos certainly isn't alone in this regard.

Nonetheless, Cronos is an entirely different animal compared to its Canadian peers. While Aurora Cannabis, Aphria, Canopy Growth, HEXO Corp., and OrganiGram Holdings have all been racing to ramp up production capacity to battle over the Canadian legal market, Cronos has instead chosen to focus squarely on research and development for next-generation products, along with an eventual transition to the United States.

Is Cronos stock a buy?

The management team at Cronos clearly sees the writing on the wall. The Canadian legal cannabis market has far too many mouths to feed, and the real money is ultimately going to be made in the far larger U.S. market anyway. So, it makes a lot of sense that Cronos is already starting to gear up for a move to the United States.

The downside is that Cronos is a black box at this stage of the game. Management hasn't given away much regarding its future biofermentation-based product line-up, and the highly fragmented U.S. market could take years to consolidate.

Should investors have faith in Cronos's somewhat fuzzy and slowly evolving business strategy? The answer depends on your tolerance for risk. Cronos could evolve into a major player in the U.S. market, with a unique and highly differentiated product portfolio. But there's also the significant risk that Aurora, Canopy, or perhaps an entrenched U.S. competitor ultimately relegates Cronos to second-tier status in the American market. There are just too many moving parts to make a solid call either way right now.